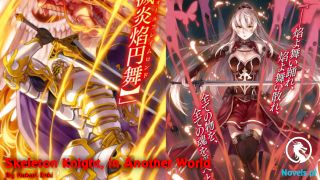 He had devoured the one hundred and fifty-kilogram python’s brain. The energies stored in the tiny organ, spiritual and non-spiritual, had turned into Xia Lei’s sustenance. He had fed on it and the mysterious energy had started to work digesting it!

It was a bewildering experience, one that could not be explained with words. The mysterious energy within him was working like some sort of chemical to disintegrate the energy obtained off the python. It was meticulous and selective, throwing out those that could not be used and leaving behind those that could be worked with. His brain cells were incredibly active throughout the process, almost as if it bore unlimited potential!

The heightened activity and borderless potential was a sign that his brain was growing stronger.

Why was his brain getting stronger? Well, it had gotten a hold of a source of new energy, something that would help Xia Lei’s evolution!

Shentu Tianyin clambered up from the grass, panicked and pulled her pants up all while looking like a hot mess. With a rock in her hands, she once again dashed for Xia Lei and the python.

“Hubby-----” Shentu Tianyin screeched through her tears, ferally slamming down the rock onto the python’s skull.

The snake’s skull was flattened and its bones were crushed. Despite the damage, no fluid had flown out.

Shentu Tianyin’s heart sank, eyes widening in disbelief as she took in the sight of the lifeless python. Then, she stared at the rock in her grip. It was a self-known fact that she was weak, how was it possible for her to kill a gigantic snake with just a rock? She refused to believe this!

Yet, the python was dead nonetheless.

Abruptly, she tossed the rock away and lunged for Xia Lei. She grasped his shoulder in an attempt to pull him out of the snake’s strangle. Despite the effort, her strength was insufficient. She could not pull Xia Lei out of its grasp, let alone pry the snake’s length body loose.

Her knees gave out and she fell onto the ground. She decided to try harder. The woman stomped the ground and tried to pull Xia Lei out through the underside of the snake but she could not move him at all.

“Huff-----” It was then that Xia Lei finally managed to suppress his raging hunger.

“Hubby! You…” Shentu Tianyin broke out in tears, no longer able to say anything.

This was not the first time she had called him ‘hubby’ on this day. In her heart and subconsciousness, Xia Lei had always been her husband. No one could ever replace him as her husband.

Shentu Tianyin was stunned but loosened her grip obediently.

Xia Lei pushed his palms against the python’s body with a heave And the one hundred and fifty-kilogram snake rolled off his being.

Shentu Tianyin rushed forward and wrapped him in a hug. She was sobbing profusely. “You scared me… Sob… Sob… I was so worried… Sob…”

“I don’t wanna live here anymore. Let’s… Let’s just go back… Sob… Sob… “ Shentu Tianyin broke down further, no longer able to halt her tears. The reason behind her mental meltdown was not due to the shock of the snake’s emergence but more on the fact that she thought Xia Lei had been killed by the python. To her, Xia Lei played an irreplaceable part in her life. She could not bear to lose him. Losing him was no different from slaughtering her!

Xia Lei, on the other hand, chuckled at her antics. “Weren’t you the one who insisted on coming to Africa with me? Do you understand how dangerous it is now? How about I send you home?”

Shentu Tianyin hugged him tighter and sank her teeth on the fleshy top of his shoulder. She cried, “I… I’m so sad that I could die and here you are teasing me… You’re such a bully… Sob… Sob…”

When in tears, the ice queen seemed like a different person- She had slid off her throne and morphed into a soft, sensitive maiden instead.

Xia Lei brought her closer. “Don’t worry, there’s no need to be scared. With me by your side, no one can harm you.”

Shentu Tianyin let out a whine and buried her face into his chest.

Just like that, the python’s corpse laid quietly in the middle of the small jungle. The crushed skull courtesy of Shentu Tianyin had finally shown some bleeding, yet no brain content was flowing out as anticipated. Out of curiosity, Xia Lei used his vision on the python’s brain and the sight of a shrivelled, rotten organ was returned. The python had suffered the same fate as Zhu Xuanyue’s victims and the thought alone was enough to disgust him.

“Tianyin, we should leave,” urged Xia Lei. The man did not wish to remain in this jungle patch any longer.

Shentu Tianyin refused to move from his arms. Instead, she tightened her arms again. “Just indulge me a little, yeah? I haven’t been hugged to sleep by you since forever.”

Xia Lei pressed his lips against the shell of her ear. “The skies are brightening up. If we don’t leave soon, someone is bound to find us like this. It’s going to so awkward. I’m alright with the intrusion but if someone were to see you in this state, I’d be distraught.”

Those words seemed to work. Shentu Tianyin reluctantly moved out from his lock and tidied her appearance. After she was appropriately clothed, she spared a look at the python’s body. “Hubby, did I… Was I the one who killed it?”

At the rate of their relationship’s development, Xia Lei no longer minded how she was referring to him as her husband. He cast her a smile. “Yeah, who else but you? You were the one who killed it and saved me.”

Shentu Tianyin was hesitant to believe that. “It seems like it but… Where did I get the strength from?”

Xia Lei replied, “Perhaps the Force was with you.”

“You’re lying. Why would the Force be with me?” Shentu Tianyin punched his chest lightly. “You must’ve taken care of it and I so happened to deliver the last blow.”

“It’s alright, ignore it. Let’s go back to the village.” Xia Lei grasped her palm and navigated themselves out of the jungle.

Back at Riverside Village, the first person they ran into was Said.

“Mister Song, I went to look for you in your room but you weren’t there.” There was a friendly smile on Said’s lips. “Where did you go?”

Xia Lei promptly replied, “We went out for a walk around the perimeter and did some stretches.”

“Oh, I see. Breakfast is ready. Please come with me,” instructed Said.

Xia Lei nodded and then brought Shentu Tianyin along. Thankfully, the woman could not understand the French language. If she had heard the ‘exercise’ mentioned, she would’ve blushed furiously.

After breakfast, a few women from the village surrounded Shentu Tianyin and attempted to establish communication through hand gestures. The woman could not understand what they were trying to illustrate. Just as she was about to call for Xia Lei’s help, the man had already left with Said.

They exited the dining hut. Xia Lei said, “Today, we must get all the cars ready. There’s no need to hold back on payments. You must choose the best off-road vehicles available. Other than that, please prepare necessary car parts for potential repairs and buckets of petrol.”

Said replied, “No problem, Mister Song. Please rest assured. In Yaounde, you can buy anything you wish with money. Plus, you even gave us such a big sum. I’m sure this whole thing would be alright.”

Xia Lei hesitated for a moment but said it anyway, “Can you help me purchase some sports energy bars?”

“To eat, of course. I like to eat that,” answered Xia Lei.

That was a blatant lie. Xia Lei wasn’t particularly fond of the item but it would be ideal for meal replacements. The taste of regular food was upsetting to his system so a bland energy bar would work better. It was concentrated with energy and nutrients the human body required and could easily satisfy biological needs. It was a better option compared to eating human brains.

Said, on the other hand, found Xia Lei’s taste a little odd. Despite that, he agreed anyway. “Sure, no problem. I’ll bring some villagers into Yaounde right away.”

“Go. Remember what I said earlier.” Xia Lei reminded grimly. “You’re currently a businessman. Do not simply engage strangers in conversations and do not answer anything they ask. After you get the cars, try to avoid roads with surveillance. Understood?”

The sight had Xia Lei stunned. “They… I can’t believe they’re walking to the city. Can they actually drive?”

No one could answer him.

Shentu Tianyin finally managed to escape with a sour look. “They’re so friendly but I don’t understand a single thing that they’re trying to say.”

Xia Lei tugged on her wrist. “Let’s go back and wait for Said’s return. We’ll be heading to Nigeria tomorrow morning.”

Shentu Tianyin let out a hefty sigh. “I wish to stay here a little longer. If I could be freed from the Vientiane Group and you could run away from the Thunder Horse Organization and work for the country, wouldn’t it be great to live our remaining years in a peaceful village like this?”

“Are you able to adapt to this place? This place has no light bulbs after all,” said Xia Lei.

“Of course not. But if you’re here with me, I’m willing to brave through all obstacles,” muttered Shentu Tianyin.

She really was a changed woman.

They returned to their rooms and Xia Lei brought out his hacking laptop to work on Super Xiao Qian.

Shentu Tianyin laid on the bed leisurely. One hour later, she brought out a hidden glass vial on the headboard. “Hubby, are you thirsty? Here, have some water.”

Xia Lei did not spare her attention, merely reaching an arm over for the ‘water’.

Wordlessly, she placed the glass vial into his palm.

Xia Lei brought the vial to his lips and was immediately assaulted by a familiar but weird scent. He was dumbstruck when his eyes finally settled on it. The man whipped his head around and stared at Shentu Tianyin with an expression close to mirth. “Tianyin, you…”

On cue, Shentu Tianyin pulled her collar wider to expose a span of pale skin and a deep valley. She drawled languidly, “Oh dear, why is so hot over here? Jeez, it’s so warm. I can’t bear this any longer, I’m going to take off my clothes.”

This was a problem due to her frenzied pursuit for a pair of twins.

In the early hours of morning, a convoy consisting of four off-road vehicles departed Riverside Village northwards. They were headed for Nigeria.

A new storm was cooking up in the background, ready to burst at the seams.