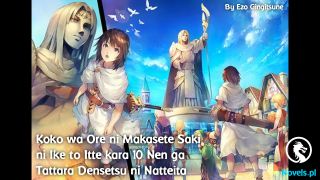 Chapter 930 Expedition to the Ancient Desolate

Han Jue sighed upon looking at the chattering Han Qing’er.

He felt closer to his daughter.

It was as if she was still the same. Han Huang was not as cute as when he was young, so the father and son did not talk as much as before.

Han Jue teleported to the main Dao Field and jumped into the Universal Hall outside the 33rd Heaven. Only Heavenly Venerate Xuan Du was meditating and cultivating in the hall.

Han Jue called out. Heavenly Venerate Xuan Du woke up and hurriedly stood up to bow when he saw him.

Heavenly Venerate Xuan Du nodded and asked, “Why did the Heavenly Sage come?”

Han Jue said, “To ask about the Heavenly Dao and the Ancient Desolate.”

The Heavenly Dao was still developing at a high speed. Currently, there were more than a hundred Chaotic Heavenly Roads and countless Chaotic Cities in all directions. All sorts of array formations had been set up. The Heavenly Dao would not panic even if the Three Pure Sacred World and the Ancient Desolate attacked now.

As for the Ancient Desolate, there was still no movement.

Heavenly Venerate Xuan Du looked at Han Jue and said, “Heavenly Sage, so far, the Ancient Desolate Divine Spirit is either recuperating or accumulating strength. It won’t attack the Heavenly Dao for the time being. You still have time to cultivate, and the Heavenly Dao also has time to prepare.”

Han Jue said, “How many geniuses of the Heavenly Dao have been captured by the Ancient Desolate?”

“Continue according to your plan.”

Han Jue stood up and left.

Heavenly Venerate Xuan Du looked at his back and hesitated.

He finally sighed after he disappeared.

The truly helpless one was the Heavenly Dao.

This was not the first time, but this time, the situation was even more serious than before.

He could tell that Han Jue was under heavy pressure. In the past, he had never come alone to ask about the enemy’s situation. Furthermore, he didn’t give any instructions, which meant that Han Jue was not confident in dealing with the Ancient Desolate.

Against the Ancient Desolate Divine Spirit, it still depended on the Divine Might Heavenly Sage.

He just had to protect the Heavenly Dao!

Han Jue came to the Foolish Sword Sage’s Dao Field. He was pretty surprised to see Han Jue. The two of them began to chat.

The Foolish Sword Sage had gone to the Ancient Desolate several times and was severely injured, but he could escape every time. After all, he was an existence who could escape from Han Jue.

“Old Fool, don’t go to the Ancient Desolate in the future. Guard the Heavenly Dao,” Han Jue reminded with a concerned tone.

The Foolish Sword Sage was like a cat whose tail had been stepped on. He immediately stomped his feet.

“Ancestor Tian Xu is impressive, but give me time, I’ll kill him sooner or later!” The Foolish Sword Sage said angrily.

He had always wanted to prove his strength in front of Han Jue, but the enemy was stronger.

Han Jue smiled and said, “Old Fool, I know best how powerful you are. Are you in a hurry? Ancestor Tian Xu will die sooner or later. Why fuss about the dead?”

The Divine Might Heavenly Sage was still the most eloquent.

This was also the thing that the Foolish Sword Sage admired the most about Han Jue. He had clearly proved his strength, but he was never stingy with his praise when facing people weaker than him.

“Heavenly Sage, you said that Ancestor Tian Xu is going to die?” The Foolish Sword Sage sat down and asked curiously.

The Foolish Sword Sage was stunned, as if he had heard wrongly.

Didn’t the Divine Might Heavenly Sage only guard the Heavenly Dao and not attack distant enemies?

The Foolish Sword Sage immediately became excited. “I want to go too. I want to see Ancestor Tian Xu begging for mercy in front of you!”

Thinking of Ancestor Tian Xu’s arrogance, he was furious.

“No, the Heavenly Dao needs someone to guard it to prevent others from taking advantage of my absence,” Han Jue reminded him. The Foolish Sword Sage felt that it made sense.

The two of them chatted for a while before Han Jue returned to the Daoist temple.

He left a wisp of his will in the Daoist temple to prevent himself from dying outside and being unable to revive.

He was about to leave when Han Huang suddenly came to visit.

Han Jue hesitated for a moment but still let him in.

“Father, after thinking about it, I feel that something is wrong. Are you preparing to go to the Ancient Desolate? Is that why you said that I can go out in the future?” Han Huang asked with a burning gaze.

Han Huang suppressed his excitement and said, “Father, bring me along. I want to see your true glory. I can protect myself even if I can’t help you now, right? I’ve already followed the Mystical Power you taught me and sent a wisp of my soul into the Daoist temple. I can revive even if I die outside!”

Han Jue stared at him.

After a long while…

Han Jue smiled and said, “Then let’s go together.”

With that, the father and son vanished from the Daoist temple and arrived in the Chaos.

A red light under their feet carried them forward.

“What space is this? I can’t see through it!”

The Ultimate Origin Power formed this spatial tunnel. It was independent of the Chaos and could go anywhere without being discovered.

Apart from the Ultimate Origin Fiendcelestial, no one could forcefully barge in!

Han Jue would also create Mystical Powers during his cultivation. For example, this spatial tunnel was formed by a Mystical Power and couldn’t be taught to others. Only the Ultimate Origin Fiendcelestial could master it.

Seeing that Han Jue did not want to answer, Han Huang could only ask, “Father, what are you going to do when we reach the Ancient Desolate?”

Han Jue smiled. “How can the Ancient Desolate Divine Spirit compete with me if he escapes?”

The Ancient Desolate Divine Spirit claimed to want to flatten the Heavenly Dao. Wouldn’t he become a joke if he fled?

Han Huang clenched his fists as his blood boiled.

This was the first time he went out to fight an enemy with his father!

He wanted a true battle!

How strong was his father…

Han Huang was filled with anticipation. He could see his father’s glory in the next battle.

His father was usually gentle and was not as fierce as those Great Dao Sages. However, he knew that once he entered battle, his father would definitely be in a different state.

He really wanted to reach the Ancient Desolate as soon as possible!

At this moment, a circle of light appeared in front of him. Han Jue’s voice sounded, “We’re here.”