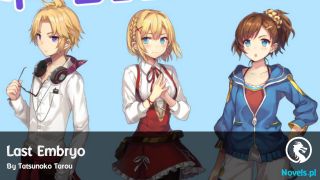 «The Rise of the Black Plain (Web Novel) - Chapter 1276 Challenge

After some time, Minos and his wives finally parted ways with those women who wanted to know about them.

His group would be in this sect for several days. So, those women did not need to ‘suffocate’ them with their doubts or desire to be close to Minos. Then, Maisie, Angelica, and Patience released them so that they would have a chance to get to know the sect.

The headquarters of this organization was like a town within Clouds City, with several places to visit.

Ruth knew these sites, so even though her sister had left with them, she was leading the way to show her family this place where she had grown up.

As it was already evening and most of the stores related to the spiritual techniques trade were closed, they would not do any business today. Thus, besides showing them a few places, Ruth only took them to see the area and have fun.

Meanwhile, Talia followed her sister’s group, occasionally looking at Minos with interest in her eyes. She knew it was wrong, but hell, she desired her sister’s man!

So even though she felt guilty, Talia thought of Minos in ways no sister-in-law should…

‘I can’t wait to get some time with him…’ She pondered as she saw him winking at her.

But then Abby talked about a serious subject. “Minos, I think you should stop resisting becoming the heir to this sect.”

“Uh?” Talia was the first to be surprised, putting aside the sensations she had experienced earlier to look at that blue-haired woman.

“I think so too.” Gloria agreed. “With the Gray Clouds Sect, it will be easier for us to complete our goals without risking too much while we are still weak.”

Minos understood why they thought that way, but he also kept in mind his pride and the downsides of doing so. “Such an attitude would greatly complicate our relations with the Empire and those four states…”

Abby nodded and said. “Yes, but if we keep the secret about it until you reach level 70, we can enjoy the positives without risk… And by that time, it will be tricky for those other organizations to create problems for us.”

Ruth then stated her opinion. “You can talk to your grandfather so that he will announce your position as his successor when you reach level 70. Then, the news won’t leak out, and all the other powers will have will be the rumors that already exist now.”

Talia heard these comments and interfered in their conversation. “What are you talking about? Why would there be problems for Minos to become the successor to the sect master?”

They looked at Talia and were silent while Minos thought about the matter.

In Minos’ view, everything would be complicated because he already had an agreement with Vogel and the Edwardstone family. But if he became the Gray Clouds Sect master, he would have responsibilities as a vassal of the Emperor, even though he was an ally of ‘even’ rank, a head of state.

In the middle of all this, there was still the ‘crazy’ Isabella, who could diminish his reliability to those four states along with the position of master of that sect.

Their whole situation could be complicated to a new level if Minos accepted Oswald’s suggestion. They all knew that but were not going to explain it to Talia.

Minos then said to his sister-in-law. “Follow the news in the future, and you will understand this…”

,m “Anyway,” Ruth said. “If you do this, we will have the sect, Vogel, and the entire northern region on our side in about ten years. We’ll be able to raise the level of the Black Plain without having to nurture our soldiers over the years slowly.”

Abby added. “And with that, our position will be less vulnerable when other states start paying attention to us.”

‘That’s true…’ Minos considered, feeling that if he added this sect to Vogel’s forces, he would have an increase of about 30% in terms of the total power of his network of influence.

“Let me think about that for a few days.” He commented after a few moments, satisfying his wives, who had already decided to convince him about it.

Talia remained curious about what they had in mind and interested in the fact that they talked as if the sect was smaller than the Black Plain.

As Talia considered this and their group continued walking around the interior of the large headquarters of this organization, three people approached them, coming from the opposite direction.

Talia was the first to see that such people were there for them and the only one to recognize the other party. “Ruth, these people will probably cause trouble for you all.”

Upon hearing that, Ruth and her family looked at the faces of the three individuals approaching them, two men and one woman.

They all looked young and had good looks and noble auras. But considering their cultivation level, one could not tell much about their ages or backgrounds. Of the three, two were at level 70, and the woman was at level 69.

“Minos Stuart, I presume?” The young man in front of the three asked as he looked into Minos’ eyes.

He had never seen the King of the Black Plain before. Still, considering this person was standing next to Vince and Elise’s daughters, it was not difficult for him to surmise such a thing.

“That’s me. Who are you?” Minos looked at that person and then at the two individuals behind this black-haired young man.

He then made a noble gesture with his hands and said. “This one here is called Lance Terry. These are my companions and friends, Leopold and Megan.”

He then looked at the women beside Minos and Talia and asked. “I suppose those are your wives?”

“You are quite perceptive…” Minos said, curious to know what these people wanted with him. “So? What do you want?”

“Hehe, straight to the point. I like it.” The young leader of this group said as he formed a smile on his face. “I am curious to meet the famous King of the Black Plain, of course. There are many rumors about you, the future King of Vogel…”

“I would like to know if they are true and also, what do you think about a friendly match? Would you be interested?”

“Friendly match?” Minos looked interestedly at this person just before Talia said in a low voice in his ear. “This person competed with your mother for the position of successor to the sect master. I bet he’s here looking for trouble.”

‘Really?’ Minos’ eyes sharpened, understanding that this guy was there to test him.

He then said. “I don’t know what you in the Gray Clouds Sect normally do. But I rarely show my skills to anyone other than my family, subordinates, or enemies on the battlefield.”

“I don’t get involved in friendly battles unless there is some kind of advantage at stake.”

“Oh? Do you want to make a bet?” Lance’s eyes widened, finding interesting what the fellow in front of him seemed to suggest.