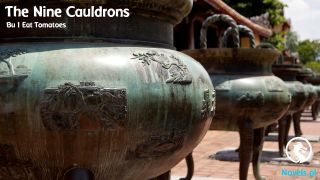 After Xia Xibei delivered the fish to the other two groups of guests, she successfully left them with mixed emotions.

Originally, they thought that Xia Xibei’s group must be very miserable and had to be helped.

Who would have thought that, after a turn of events, they would instead give charity to others?!

Only after Xia Xibei and the others left did they start eating the fish.

When the fish got into their mouths, they all fell silent and looked revived.

It was so delicious!

The fish was marinated just right too. With no fishiness, the taste was just right!

This was more delicious than the various fish dishes they had eaten in the city!

After a moment of silence, everyone silently ate faster.

The camera recorded the scene faithfully.

He Liangjiang and Zhao Xinyi were not slow in their movements.

They had thought that Cheng Yingni’s cooking skills were good, but after eating the grilled fish from Xia Xibei, they realized that they were really too young!

The fish was more than two catties. It was not very big, but not small either.

However, in a short while, it was finished by them.

After eating, they even patted their stomachs contentedly, the insatiable look on their faces very clear.

Only Cheng Yingni ate less, and her expression was not so good.

When she was facing the camera, her expression was still quite normal, but off-camera, her face darkened.

The two men looked at her reaction and didn’t say anything.

Meanwhile, Xia Xibei and the others went back to their house.

It was a relatively nice house in the village, with two floors!

The three of them chose their rooms and began to unpack.

The room was not big, but the quilt inside was quite thick, enough for them to rest well here.

After settling into the house, everyone went out for a walk.

It was now after three in the afternoon, and in a few hours, it would be time for dinner.

No one knew, however, where dinner would come from.

The crew hadn’t even started making their demands yet.

Everyone knew that if they couldn’t do what the crew wanted, they would really have to go hungry.

Shi Shuhang and Nie Zehai were glad that they ate a full lunch, so it was okay if they didn’t eat at night.

One meal could last them a while!

Their stomachs were full and their bodies were warm.

They walked slowly along the village path, attracting the attention of many small children.

There were not many strong laborers in the village, as most of them had gone out to work, leaving only the elderly and the children.

However, the environment here was good, so those who stayed were doing quite well.

There was a reason why the TV program chose this place. It was not so poor that people would be depressed seeing the place, but it was also not too comfortable so the guests could still get a challenge.

“I was thinking, what about breakfast tomorrow?” Shi Shuhang said to Nie Zehai.

Nie Zehai could only shrug his shoulders, “We’ll figure it out then.”

Otherwise, what else could they do?

The two of them looked at each other and followed.

Soon, after turning down a road, a view opened up in front of them.

There was a large, open space.

There were many people gathered in the open space, all of whom were the village’s middle-aged and elderly folks.

Everyone formed a circle, and in the middle was something large.

Everyone was sad and looked like they were going to cry.

When they got to the front, they were still confused because these people were speaking in dialect! The accent was too heavy for them to understand!

As they hesitated, Xia Xibei spoke up, leaving everyone stunned.

She was speaking their dialect!