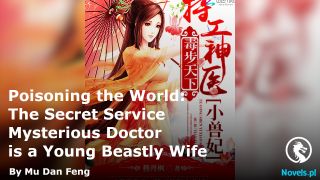 Wei Wucai very considerately did a screen recording of the whole process of him comparing the audio frequency and attached a voice-over explaining the process.

Lu Man had never seen Wei Wucai before. The first time she heard the voice in the video, she realized that Wei Wucai’s voice was really nice.

Lu Man honestly felt that a person’s voice in a device would surely sound a little different from their actual voice. Exactly how nice his voice was, she could only be sure when she heard it in person.

It was just like how Wei Zilin’s voice-over works were not much different from his real voice.

However, Wei Wucai had clearly recorded it casually.

However, there was no choice. Han Zhuoli was still a jealous lover. His motive for asking this was way too obvious.

Lu Man’s wish to live can be said to have been honed very well by Han Zhuoli’s training. She immediately said, “Of course your voice sounds nicer. It’s sooo nice!”

Right after downloading the video file, Han Zhuoli moved it to a different location and asked again, “Then is my voice nicer, or is Wei Zilin’s voice nicer?”

Lu Man thought to herself, what an arrogant dog he became!

He even dared to compare himself to the god of voice-overs!

Although Wei Zilin was the boss of “Lin Yi,” he had once been called over suddenly to help out a good friend’s movie that was lacking a voice-over actor. He did the voice over for the second male villain in the movie.

Who knew that the second male villain character that he did the voice over for would become even more popular than the male lead and would even rise to great popularity?

Of course, his voice was even more popular than the second male lead himself.

Hence, there were many films that wanted Wei Zilin to be their voice actor, but Wei Zilin was not someone who would take on any kind of role. This was not even his main job.

He accepted jobs only occasionally.

Most of the time, Xu Moyan was the one who made the decisions on it.

Before marrying Wei Zilin, Xu Moyan was already a huge fan of his.

After marrying Wei Zilin, she would want to listen to his voice-over works from time to time.

Whatever she wanted to listen to him do a voice-over for, he would go do it. He was utterly spoiling his wife.

“Your voice is really nice!” Lu Man said very confidently. “Although, from an objective point of view, both your voices are equally nice, so it’s hard to say which is nicer. But you’re my hubby! There are additional subjective points to be added for that. So from my subjective perspective, your voice sounds nicer than Wei Zilin’s!”

Lu Man’s words could be said to be extremely sincere. She felt that she articulated her words very skillfully.

If she’d immediately said that Han Zhuoli’s voice sounded nicer than Wei Zilin’s, that would have been too fake.

After all, Wei Zilin’s voice had already been recognized publicly by netizens as the top in the country.

That male god-like voice of his is utterly mesmerizing.

And to tell the truth, Han Zhuoli’s voice did sound nice as well, and it was of a different style from Wei Zilin’s.

Comparing their actual voices, their difference was actually not that big.

However, Lu Man did not expect Han Zhuoli to become so arrogant. When he heard such a sincere answer from her, he actually sputtered out laughing. “In your heart, there shouldn’t even be anyone who has a nicer voice than mine.”

That was too arrogant of you, Mr. Han!

“Yes, in my heart, there is indeed no one who has a nicer voice than yours,” Lu Man said very discerningly.

Only then did Han Zhuoli open the video that Wei Wucai just sent to watch it together with Lu Man.

“Wei Wucai worked really hard on this. He’s too detailed. Even a layman like me can understand it clearly,” Lu Man said. “I have to thank him properly for this.”