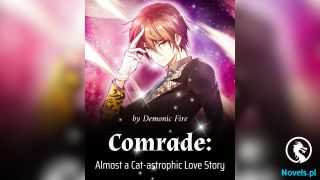 Lu Zhixi also clenched his fists tightly, and the dark light in her eyes seemed to overflow.

Feng Yunqing stared at Hexi, and she suddenly launched a black water arrow at Hexi.

Feng Yunqing’s action was quick, decisive and secretive. Before the people in the square realized, the black water arrow was already in front of Xi Yue.

“Ah—!” Someone exclaimed with a voice full of worry and nervousness.

After these 2 battles, many people’s thoughts about Xi Yue had changed subtly.

For Feng Yunqing’s sneak attack, dissatisfaction and contempt arose in many people’s minds.

Feng Yunqing had a sinister smile on her face. As long as I can kill Xi Yue, so what if I’m despised by others?

However, the next moment, Feng Yunqing’s smile froze on her face.

The water arrow penetrated the position where Xi Yue was, but there was no scream nor a piercing sound. Xi Yue in everyone’s eyes was disappeared into the air like a reflection in the water.

The water arrow was still moving forward, more fiercely, toward Elder Qin who was standing behind Xi Yue.

Elder Qin was frightened, but he didn’t put the black water arrow in his eyes at all. He just flicked his hand gently.

With his Nascent Soul Stage strength, he wouldn’t even bat an eye at the water arrow released by a mere Gold Core Stage martial artist.

It was Xi Yue who made him furious.

After flicking away the black water arrow, Elder Qin felt a tingling pain when he was about to speak. He couldn’t help groaning and looked at his hand in shock.

His right hand was already black at this time, and the edge of the palm that touched the water arrow was still swollen as if thick water was flowing inside.

At this moment, Hexi’s figure reappeared in the same place with a half-smile. “Not only sneak attack but also poison, hehe, Feng Yunqing, you are really merciless.”

How could Elder Qin not understand what was going on? He suddenly shouted furiously, “Xi Yue, Feng Yunqing, are you 2 tired of living? You dare to hurt the elder in Miracle Healer Academy? I want to expel all of you from the academy!”

Hexi dug her ears with a mocking expression on her face, “Elder Qin, are you too old that your eyesight and memory deteriorate? It is obviously Feng Yunqing who poisoned you, what does it have to do with me?”

Elder Qin suddenly felt a heart-piercing pain from his entire arm when he wanted to speak.

A hint of panic flashed on his face. This poison is so powerful!

“Elder Qin, can you let Zhixi heal you first, then we will discuss the disposal of Xi Yue and Feng Yunqing.”

Soon, the originally piercing pain was slowly healed by the powerful spiritual power, and the original swollen hand gradually returned to its original state.

Lu Zhixi breathed a sigh of relief, then withdrew his spiritual power and gave Elder Qin a bottle of medicinal pills, his face slightly pale and said, “Elder Qin, it’s fine now. Just take this bottle of detoxifying medicinal pill, and you will be fully recovered in a few days.”

Elder Qin said gratefully, “Zhixi, your medical skills are really outstanding. You are almost catching up with your father. Fortunately, you are here today.”