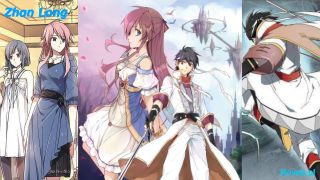 Felix and Cyclope had returned to the main forge, wearing the same goggles.

“Looks like it’s ready for the cast.” Cyclope shared as he glanced at the molten red metal inside the crucible.

Without further ado, he picked it up with tongs and closed the wall behind him, returning the main forge into its normal brightness.

Felix removed the goggles and wore his AP bracelets back on as well as his nanoclothes. It looked like regardless of what he did, he always ended up in situations that required him to go nude…

“This is the cast?” Felix wondered as he looked at a metallic container that was shaped into half a hammer and half an axe.

Cyclope nodded and started pouring the molten material into the cast, filling it up to the brim. Then, he closed it and let it cool down for a bit.

Felix remained silent and sat on the corner, watching him prepare the tools to start working on the hammer.

The cast might give an accurate shape of the hammer, but it didn’t mean that was the end of it.

Cyclope opened the cast and picked up the glowing red hammer before putting it on an anvil.

Although it was cool enough to solidify, Felix knew that it was still hot enough to be reformed.

Ax expected, Cyclope started to hammer it down in precise repeated motion, making him resemble the blacksmithing machines.

‘What will happen when the hammer cools off completely while he wasn’t done yet?’ Asna wondered with a curious tone.

‘He will be forced to heat it again but not to the point of melting.’ Lady Sphinx said, ‘But, I doubt it will reach that point as this wasn’t a normal metal we are dealing with.’

Just like it took an insane amount of time for the material to get melted off, the heat wouldn’t dissipate off it so soon.

If it was anyone else, this still wouldn’t matter much as they would be required to heat it up again. But this was Cyclope, the godfather of blacksmithing and forgery.

If one person could shape up a piece of metal to his desired state in one single go, it would defintely be him!

As anticipated, in less than two hours, the hammer was starting to turn slimmer, cleaner, and the edges were refined.

Let’s not speak about the axe’s blade as it was so sharp, Felix felt like his eyes would be sliced apart if he stared at it too much!

Still, Cyclope wasn’t done hammering it down even when the heat started to wear off and the hammer’s real color began to show.

Naturally, he had already created a hole in the center of hammer for the vines to connect with it.

‘Did he finish?’ Asna glanced upward after the clinging noise finally stopped.

‘I think so.’ Felix replied while peeking at Cyclope, who dropped the hammer finally.

His muscular bulky body was covered completely in sweat, making him resemble a Greek god. Felix remained silent as he could see that Cyclope was studying the hammer.

He kept turning it left and right while checking it out up close.

After a few seconds, he put it down and mumured while scratching his bald scalp, “Looks like I have gotten rusty to make such a mistake.”

“Mistake? Did he say a mistake?” Felix sought confirmation with a speechless expression.

“Sorry boy, you have to stay a bit longer than I anticipated.” Cyclope apologized while throwing the perfectly looking silver hammer into the crucible.

Felix didn’t even know how to react. He could only watch the wall getting opened again, exposing them to the star.

“May I ask what went wrong?” Felix inquired, “It looked perfect to me.”

“You don’t see what I see.” Cyclope smiled kindly, “I promised you a perfect masterpiece, and that’s what you will get.”

Felix could only drop the subject and hope that Cyclope get back his mojo.

He knew that obsessive perfectionists like him wouldn’t hesitate to keep trying over and over again for eternity if it meant not finishing this step perfectly!

Fortunately, grandmasters like Cyclopes allow themselves to make only one mistake.

After two days to heat the hammer, Cyclope returned to beating it up until he was finally satisfied with the end result.

Without delay, Felix appeared next to the hammer and caressed it gently with his hand.

“It’s so smooth like I am touching silk.” Felix remarked with a surprised look.

“Try to look into the hole.” Cyclope smiled.

Felix did as he was told and couldn’t help but exclaim in shock, “When did you make such veins within it?!”

Felix ought to feel shocked as the interior of the hammer had many thin and long empty veins, spreading from the hole!

“Naturally, when I was hammering in it.” Cyclope shared, “I used my manipulation to create those veins. When it was cooled, the veins stabilized and didn’t require my help to keep their shape.”

Felix didn’t need to ask what those veins were for as he knew that they were meant for the world tree first root!

Now, the roots would be able to attach themselves with both the axe and the hammer! When they separate, Felix could wield them together like sickles!

The divine ability would merely help Felix switch between forms, but it didn’t mean that the hammer wasn’t required to be first supporting the second form.

“Though, wouldn’t this harm the integrity of the hammer?” Felix asked.

Felix believed that those veins might make his hammer a bit weaker and easier to break.

“Why do you think I decided to do it again?” Cyclope smiled, “The first one had a small vein not in place, making the hammer in risk of being destroyed.”

“But after fixing it, the weakness had disappeared.” Cyclope assured, “The hammer won’t break as long as the vines entered those veins. You should know that stingy tree’s vines are even harder than the entire hammer.”

After hearing so, Felix’s worries were put at ease.

“Do you want to see how the final product will look like?”

Cyclope beamed the shimmering white root and curled it around itself until it resembled a braided ponytail.

Then, he gently pushed it through the hammer’s hole.

“Come, give me your blood.”

Felix was taken aback by his request, but he still complied…He cut his palm and gave it to Cyclope.

He held it above the hammer and poured the blood in the hole and specially the white vine…The moment the blood reached the white vine, Felix was startled to see it moving on its own akin to a worm.

That wasn’t all as the vine began to grow new more branches, which ended up growing inside the hammer as well as around it!

Cyclope pushed Felix’s palm away and started guiding the rest of the growing vines forcefully with his hands until they covered the entire bottom of the hammer.

Since the white vines were emitting light, the entire hammer started to emit it as well, making it resemble a weapon used by an angel to damn the wicked!

“This is the rough version of how it would look like.” Cyclope removed his hands after the vines stopped growing.

“It’s actually exceeded what I had in mind.” Felix praised with a satisfied expression.

He loved every bit of the hammer as it looked unique and extraordinary just from a single glance.

“How about the ancestral golden scales and the Nethersteel?” Felix suddenly inquired, feeling like the hammer was already perfect as it was.

He had no idea what else could those two materials be used for.

“The ancestral golden scales would be used to cover the bottom of the handle to give you a better grip.” Cyclope informed, “I have a couple of ideas to integrate them more into the hammer’s abilities.”

“As for the Nethersteel, it will be used to cover the top of the hammer, giving it an even better protection.”

The bottom of the hammer was already protected heavily with the vines. Although the hammer itself was extremely tough, it wasn’t bad to make it even tougher.

“Here, take it and go play it with it.” Cyclope cracked his neck while yawning, “I will be waiting for you at my room when you finalize your list.”

“Thank you, elder.” Felix bowed deeply in appreciation and gratitude. Although the work wasn’t over yet, Felix couldn’t contain his happiness for even a little.

He finally owned a divine weapon!

It wasn’t any divine weapon…It was a masterpiece that was on the same level as the greatest treasures in the universe!

This bad boy would be the key to dealing with the Darkin faction and the other hidden monsters!

“How heavy can it be?” Felix was too excited to mind Cyclope’s warning as he swiftly reached out to the hammer and held it tightly in his grasp.

Unfortunately, the moment Cyclope released his hand, Felix’s smile stiffened as he felt like a baby holding into a 20 kg dumbbell.

Felix could only curse his confidence and stupidity after ending up getting his fingers crashed by the hammer smashing into the ground!

The most shocking part? His size was at least ten kilometers, making him receive an insane physical strength boost…Still, it wasn’t enough to even lift the hammer!

“Don’t mess up my forge.” Cyclope ignored his painful cries and exited the forge, not bothering to save him.

It was Felix’s fault for ignoring his warning.

“Candace! A bit of help please…”