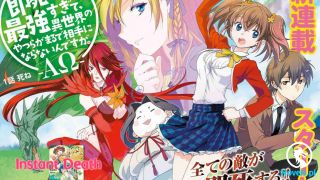 «Super Detective in the Fictional World (Web Novel) - Chapter 781: All of This? It’s All a Lie

Thankfully, Luke’s ability hadn’t matured yet at the time, and Elementary Telekinesis was far more powerful than Elementary Penetration. Most of it was just used for repelling, not annihilating.

Gold Nugget was lucky that it hadn’t been killed.

Of course, after the system assessed Elementary Annihilation and it became an official ability, Luke’s control over it increased significantly.

At most, he would take it out occasionally to zap the dog head so that it wouldn’t be so naughty.

Gold Nugget was practically immune to physical attacks, and even Elementary Telekinesis could only send it flying.

But against Elementary Annihilation, the dog head was as cowardly as a bug in the face of insecticide.

In its own words, Elementary Annihilation had a devastating lethal effect on it.

It was also because of its cowardice that Luke had more conjectures about the effect of Elementary Annihilation.

Facing Wind Demon, who was clearly immune to physical attacks, along with the other three guys who were probably also demons, Luke had still dared to step forward because he had Elementary Annihilation.

The test results for Elementary Annihilation itself was very strange. Wind Demon happened to be the ideal test subject.

It was thanks to Wind Demon that Blue Skin hadn’t been killed by Luke at the very beginning.

If he killed Blue Skin first, he wouldn’t be able to catch up with Wind Demon if the latter focused on escaping.

Elementary Annihilation didn’t have any effect on physical attacks; Luke would use this monster to demonstrate the skill’s effect on the elements.

Sure enough, the result was even better than he had expected.

Using Elementary Annihilation on his arms, he completely destroyed Wind Demon, who had been speeding and couldn’t brake, and then cut Earth Demon to dust.

Even if it had been Mephisto’s clone, Elementary Annihilation had still been able to deal it serious damage.

If it wasn’t for this top-level boss Mephisto’s unusual ability, which allowed him to forcibly touch a person’s soul, he would’ve also been destroyed in the end.

Of course, Luke guessed that there was a limit to what Mephisto’s clone could do.

The guy had talked big when he mentioned Ancient One and Thor, but it sounded more like he was saying, “I may not be able to beat you, but I’m not scared of you.”

It was possible that this guy had created a clone to avoid being hunted down by these two.

When Luke was fighting, the yellow light on his fists and body was just the reverse effect of the Big Dipper Armor’s stealth chameleon function.

The yellow light wasn’t an ability at all; it was just an ordinary light emitted by the armor.

Coupled with the name of his “Chinese technique,” they were a cover-up to prevent anyone investigating the Elementary Annihilation ability.

Only part of the movements he had used to kill Wind Demon and Earth Demon were Chinese ancient martial arts; the real damage was from the Elementary Annihilation energy on his arms.

The truth was that the “Big Dipper Fist” name was something he cooked up from a comic in his previous life.

Just like how Batman wouldn’t use the Pegasus Meteor Fist from Saint Seiya, the “Big Dipper Fist” was in fact nothing like the one from the comic.

None of his abilities had any visual effects, and he didn’t need to shout out his moves.

The yellow light, movements, and names were all lies.

These things would throw other people off. For example, if the Big Dipper Fist was Chinese, then the reasonable suspicion would be that Elementary Annihilation was a mysterious power from that ancient Eastern nation.

Since SHIELD didn’t have law enforcement power in China, Luke wasn’t afraid of Hydra finding out the origin of the “Big Dipper Fist.”

Hm, in any case, he indeed had no background in China.

Even the one move that hadn’t been prefixed with “Big Dipper,””Soldiers, form ranks,” was a deliberate feint.

Any Chinese person who knew their stuff would suspect that it was someone else pretending to be Chinese, since this common phrase had been recited wrongly.

The reason why he was using so many cover tricks for the Big Dipper Fist was because Elementary Annihilation’s effect was truly very unusual.

The Big Dipper Armor had in fact been specially made in order for him to use Elementary Annihilation.

The Big Dipper Fist could only be used in the dark, and “he” would be the specter who specialized in hunting the most difficult supernatural groups.

“He” wouldn’t have any connection at all with Luke’s other identities.

Thinking about how the Big Dipper Armor had defeated Mephisto’s clone in its first appearance tonight, Luke didn’t think that it was suitable for “him” to be connected to anyone.

After checking his first reward for the night, Luke looked at the team module and the names in it. He sighed and said, “Forget it. This is something that can make people unhappy. I’ll just wait and see.”

Making up his mind, he checked the files he had obtained from Johnny’s house and searched for information on Mephisto and the blue-skinned young man.

In the meantime, Drax called to let Luke know that they had arrived home safely, and told Luke not to stay in Dallas anymore.

Luke hummed in reply, but apologized inwardly to his grandpa.

At the very least, he still had two boss-level EXP monsters to kill. He had to try at least once before he returned to Los Angeles the next morning.

He stayed at the donut shop until the morning and finally finished tasting more than 45 different kinds of donuts.

The waitress, who had seen many big eaters, also cast him many sidelong glances.

Luke was the only person the woman had ever seen do so in her life.

Before he left, Luke ordered two boxes each of the best flavors: blueberry cheesecake, honey cream, and tiramisu.

As for the sickening sweetness, Selina and Gold Nugget didn’t really care.

That was because it was these two guys who brought back the sweetest things of them all to try; they truly had very sweet tooths.

After he left, he went to a hotel near Johnny’s house and booked a room where he could observe Johnny’s place.

He washed up and went to bed. When he woke up two hours later, Johnny still hadn’t returned.

Luke wasn’t in a hurry. He turned on the TV.

The local news had already reported the destruction of many streets in the city last night, but Johnny’s face wasn’t on camera.

Luke didn’t know if it was because Johnny was too lucky or because there were too few surveillance cameras in Dallas.

Also, the chaotic fight at the factory in the suburbs last night was on the news, and the police had already linked it to the bar massacre.

After all, a night watchman had died in the factory in the exact same way as the people in the bar massacre.

At noon, Johnny returned to his place.

Before noon, he had gained a lot from the mini drones that he had placed in the church in the cemetery.

If the conversation between the old man and Johnny was true, Luke had a rough idea of why all this was happening.

This included the backgrounds of Mephisto, Ghost Rider, and Blue Skin, as well as what they wanted.

Naturally, this was very advantageous in helping Luke plan his operation.

It was no longer a problem deciding who should live or die.