“My lord, the chief constable from the Pingxi Law Enforcement Office has arrived. He is currently waiting outside…”

Yan Liqiang poked his head up from the paper piles on his desk at Xiong Gungun’s voice coming from outside. He cast a glance at the door as his heart thumped. “Have him wait for a moment. You may let him in once I am done with my work…”

Yan Liqiang shifted his gaze back to the paper piles on his desk as he mumbled to himself. “Interesting…”

On top of the paper piles were a few drawings. As someone who had lived two lives, Yan Liqiang was extremely familiar with objects in the drawings. The objects in question were a screw, a nut, and a bearing.

The designs of the screw and nut were still quite crude. The screw’s spiral groove wasn’t as fine as the normal screws that Yan Liqiang had seen in his previous life. The diameter of the washer’s hole was also a little too wide and the square nut looked quite strange. Even so, this was no doubt a screw. A sample of the metal screw that was placed in a box looked exactly the same as depicted in the drawing.

Rather than the screw, Yan Liqiang was more interested in the bearing. The diameter of bearing was about fifteen centimeters and the diameter of the inner ring was about the size of a duck egg. Inside the bearing were four balls joined with the inner ring. It looked very bulky, thick, and black. Likewise, it was undoubtedly a bearing. A sample of it was also placed in a box. Yan Liqiang had taken a look at it earlier and tried to spin it with his hand. It could spin very fast with minimal resistance. A bearing like this was a huge leap from the traditional slide bearing which was widely used in this world.

Any invention breakthroughs they made were being handsomely rewarded, ranging from a hundred taels of silver at least to ten thousand taels of silver at most. With such incentives, the artisans became extremely motivated in constantly making small inventions or improvements to their arts. As a matter of fact, this screw and nut were none other than the latest inventions by a few of the newly-recruited artisans in the manufacturing bureau. Yan Liqiang also assigned tasks to them when he first announced this incentive at the manufacturing bureau.

The screw was created to resolve the issue between connecting metal and non-metal, while the bearing was created to improve the efficiency and durability of the traditional slide bearing used in four-wheeled carriages produced by the manufacturing bureau. Yan Liqiang had known the solution to these problems long ago, but he kept that to himself so he could see if the artisans in the manufacturing bureau could figure them out. Although they took a little too long to figure it out, they still managed to find the solution in the end just as Yan Liqiang had expected.

The invention of bearing was a rather funny story. The Aquapyro Engine’s flywheel and rotation shaft actually had the concept of a roller bearing. Instead of using a bearing, four rollers were attached to the crankshaft to put the Aquapyro Engine together.

After producing several hundred Aquapyro Engines, the artisans finally thought of replacing the Aquapyro Engine’s bulky flywheel and crankshaft on both ends of the rollers with something else that could provide other functionalities. Thus, this was how the first roller bearing on the Silver Continent was born.

Until now, the two items had not been given names by the artisans at the manufacturing bureau.

— This invention is to be named as a screw. The inventor shall be rewarded with ten thousand taels of silver!

— This invention is to be named as a bearing. The inventor shall be rewarded with twenty thousand taels of silver! The invention may now be used on the four-wheeled carriages. Also consider replacing the flywheel and crankshaft of the new Aquapyro Engines with this object. The screw and bearing still have room for improvement. Keep the good work, everyone!

— I am extremely pleased to see all the inventions from everyone in the manufacturing bureau. Not only that, but I am also pleased to find that everyone has gotten well-versed with sketching clearly-labeled diagrams with measurements!

Yan Liqiang took out his brush to write down his feedback on the documents that the manufacturing bureau had submitted to him before setting them aside. After having a short tea break, only then did he send someone to bring the chief constable from the Law Enforcement Office to him.

Soon after, a man dressed in black arrived in the drawing room. As soon as he entered and saw Yan Liqiang who was seated behind his desk, he immediately gave him a respectful greeting. “Chief Constable Han Ping from Pingxi City’s Law Enforcement Office greets the Protectorate General!”

The man had a square-tanned face with a bushy beard and his strong body was clad in a chief constable uniform. If someone like this were to stand on the streets, his aura would definitely scare off any bad people in the city. He wasn’t a stranger, but a person whom Yan Liqiang knew well. Who would have thought that he was actually someone from the White Lotus Society…?

Yan Liqiang sighed inwardly as he activated the Psychic Serpent in his mind. However, he put an even friendlier expression on his face as he gave the person a smile. “Have a seat, no need to be so formal. After all, this is the second time we’ve met. I remember the last time we met was a few years ago when Lord Sun took down Ye Tiancheng after his inspection at Pingxi City. I was searching Ye Tiancheng’s manor on the outskirts of the city back then. I remembered it was you who brought your men in from outside…”

Upon hearing Yan Liqiang, Han Ping looked rather flattered and excited. His bottom had barely touched his seat when he shot up from his chair again and bowed to Yan Liqiang. “I am surprised. I did not expect the Protectorate General would still remember me although we’ve only met once!”

“Haha, I have good memory. I recall you were only a constable back then. Seems like you have become a chief constable in just a few years’ time. Well done!”

“I’ve only been doing what I can. I can only thank Lord Wang Jianbei for thinking so highly of me…!”

“Do you know why I invited you over?”

“I’m guessing it has something to do with the missing case of an archery academy student!”

“That’s right, you are correct!” Yan Liqiang slightly narrowed his eyes as he leaned forward and stared at Han Ping seriously. “This incident creates a very negative influence because the missing student, Xue Cao, is an excellent student in the archery academy. Not only that, but he has also progressed into a Martial Warrior. In your opinion, who kidnapped Xue Cao? Your side has been investigating this for a long time now. Is there any news?” 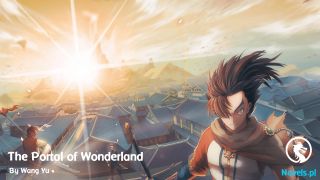