Support
Random Novel
A Returner’s Magic Should Be Spe 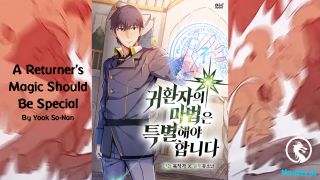 Gu Ning subconsciously thought that the three soldiers could be stuck inside, so she used her Jade Eyes to see the inside of the soil at once. However, she didn’t find any bodies; there was just a dark hole about a meter down. It seemed the hole extended and tilted downwards. Most importantly, it was filled with Yin.

Gu Ning thought that this hole had to be the place where the monster hid itself.

She searched for it in the dark hole with her Jade Eyes. About 10 meters away, she saw a space around 10 square-meters in size and two meters high. There was a small water pond in it too. A giant monster which looked like an eagle with horns was lying there resting.

It had acute senses. The second Gu Ning’s sight fell on it, it felt it and looked at the entrance of the hole. Its eyes were big and bloodshot.

Gu Ning immediately moved her sight away from it, and only then did it lay back down.

Sadly, once Gu Ning moved her sight away, she noticed scattered camouflage in a corner.

Although she knew that it wasn’t very likely that the three soldiers could survive when she heard they were missing, she still felt sad seeing the camouflage. However, it was no use crying, and what she had to do now was to protect innocent people from being attacked again.

Gu Ning didn’t recognize the monster, so she referred to her phone. Luckily, her phone could receive signals in the woods.

Leng Shaoting was a little confused by Gu Ning’s action, but he didn’t ask any questions about it because he knew that Gu Ning would explain it to him later.

After searching, Gu Ning found out that the monster was a Gu Eagle, which was a man-eating monster. It was an ancient monster like the jiao from the myths.

Because she already had a jiao, Gu Ning wasn’t surprised to see a Gu Eagle.

She gave her phone to Leng Shaoting without delay, then said in a low voice, “There is a monster like this in the hole under the ground.”

“Gu Eagle, a man-eating monster? Isn’t it an ancient monster from the myths?” Leng Shaoting was astonished.

“Anyway, it really exists now, and there is camouflage in the hole too. It’s obvious that it has eaten the three missing soldiers,” Gu Ning said. “We must kill it in case it hurts any more innocent people.”

Knowing that, Leng Shaoting felt sorry for the three missing soldiers, but he also knew it was useless to cry now. They had to kill this monster as soon as possible. However, Leng Shaoting was worried. “It seems very strong and cruel. Can we win?”

Gu Ning actually wasn’t sure whether they could defeat the monster together, and she thought it was time for her to let Leng Shaoting know about the jiao.

After thinking for a while, Gu Ning said, “Shaoting, there is another unbelievable thing I need to tell you.”

“What is it?” Leng Shaoting got nervous seeing Gu Ning being so serious.

“In fact, there is an ancient monster in my telepathic eye space now, and it’s a jiao. It’s unusually strong and aggressive, but now it listens to me. If we can’t beat the Gu Eagle, I’ll send it out,” Gu Ning said.

Gu Ning planned to turn to the jiao for help only when she and Leng Shaoting failed to control the Gu Eagle, because they needed to practice their skills and they couldn’t rely on others to help them solve problems every time.

It was impossible that the jiao would stay by her side forever. She had to improve herself in case she encountered stronger enemies in the future.

Leng Shaoting frowned when he heard that. He knew that a jiao was also an ancient monster, and that it was very evil. However, since Gu Ning said the jiao listened to her now, it should be safe.

Although Leng Shaoting was surprised by the existence of the jiao, he soon accepted it.

“Pull out your gun, I’m going to get it out. Once it shows up, shoot it,” Gu Ning said.

Even though she wasn’t confident that guns were useful, they still needed to have a try.

Leng Shaoting nodded and pulled out his gun.

Gu Ning then handed him a bronze dagger. “If the gun doesn’t work, you can use this dagger to fight against it from a close distance.”

After that, Gu Ning used her Jade Eyes again to see the Gu Eagle. When her sight fell on it, it got back to its feet at once and walked to the entrance to have a look, but it didn’t walk out.

The Gu Eagle didn’t know that there were human beings on the ground, so it didn’t understand why it had this strange feeling that someone was looking at it. Therefore, it looked around for a while, then went back to sleep.

Seeing that, Gu Ning fired a bullet against the ground, which scared the Gu Eagle and it jumped up to stare at the entrance, but it still didn’t walk out.

The gunshot made it realize that there were people on the ground, but it didn’t know whether it was the target.

It had eaten three men and was stuffed now, so it had no desire for food and was unwilling to leave the hole. As a result, Gu Ning had to use her magical power to attract its attention.

As the magical power permeated through the ground and into the hole, the Gu Eagle soon sensed it and its eyes lit up. It couldn’t resist the temptation, and quickly left the hole.

With a loud sound, the Gu Eagle directly went to the surface by bursting from the soil.

Leng Shaoting shot it without hesitation, the bullet hitting its leg.