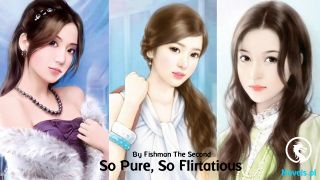 Edward’s expression stiffened. The smile and relaxation on his face disappeared.

“Adventurers? What are you thinking?”

“It is literally as I said. It has to do with the request to be made later. You don’t have to appoint them to important positions. Just in moderation. Show them in moderation. It doesn't matter if you give them false information or whatever.”

Hyeonu waved his hand like it wasn’t a big deal.

“No, what are you saying now? You want me to accept spies with my own hands?”

Even so, Edward’s stiff expression didn’t relax. Rather, it became more serious. Hyeonu’s words could never be listened to lightly.

“Your head is so hard… at this rate, you won’t understand me at all.”

Hyeonu’s expression slightly stiffened. It felt like he had to tell this person all the hidden plans. It seemed impossible to persuade him without this.

‘He doesn’t understand the big picture.’

“Then listen up. I’ll tell you in advance what I’m going to do.”

“In 10 days, you will be free from the effects of the fragments of the demon god. That is what you know so far, right?”

“How can I not know that? I’ve been thinking about it several times a day.”

Freedom—it was something he craved dozens of times a day.

“What are you going to do once you escape from the grip of the fragments? Are you planning to go back to the north? Or are you thinking about continuing the war as it is now?”

Hyeonu naturally proceeded with the conversation. He didn’t just explain his plan. He tried to make it easier for Edward to understand.

“I have to go back to the north. It isn’t enough to wage a war against the empire right now. Time is needed. It is safe to say that the present Yusma Empire is in an unprecedented golden period.”

Edward soberly evaluated the situation. The Yusma Empire practically ruled the continent. There was also an empire in the East Continent called the Yuxin Empire, but there was the emperor, Lebron, and John Blake. It was unclear if the Yuxin Empire could handle these superhumans. This was the case for a great empire, so it was crazy for Edward, who led the relatively weak undead, to go to war against such a Yusma Empire.

“No, the war must continue. You should never stop it.”

Hyeonu shook his head firmly. The war with the undead army shouldn’t end. Even if large-scale battles didn’t take place like they were doing now, they still had to occur intermittently. This was the cornerstone of Hyeonu’s big plan.

“Did you listen to me? I can’t deal with three monsters. At most it is one person, one. Anything beyond that is absolutely impossible.”

Edward didn’t listen to Hyeonu to the end. He cut Hyeonu off straight away. There was no need to listen any longer. It was just ridiculous nonsense.

“The emperor won’t leave the imperial palace and Duke Lebron won’t leave the capital. It is Duke Blake who is the problem, but he also doesn’t want to get involved in a pointless war.”

Hyeonu had determined the future actions of the three monsters.

“There is no guarantee they will move that way. I’m the one who will lose if even one person moves incorrectly.”

“Even so, the only unpredictable one is the emperor. The rest will never get involved in the war.”

Hyeonu also stubbornly continued to express his opinion. He acted like he couldn’t hear Edward at all. Of course, there was a reason for this.

“Lebron will never interfere for a moderate threat. The same is true of John Blake. Additionally, just listen a bit more.”

It felt like his lips were becoming dry from talking for so long for the first time in a while.

“Be the first to accept adventurers and create a kingdom in the north. Then push the front line back slightly and expand. You shouldn’t push as hard as you are now, but instead make it a gentle, thin, and long war. You just need to send adventurers there. Offer reasonable rewards.”

Hyeonu quickly told Edward the plan he had drawn up. Edward thought about it for a while before opening his mouth, “Nevertheless, it is impossible. Don’t you know how many adventurers are in the empire? The power doesn’t match.”

There was no balance between the two of them even if he increased the number of senior undead or pushed with numbers using the low ranking undead. There was no answer.

“Don't worry. The empire’s power is not concentrated in the north. The same is true for adventurers. Don’t think the current power balance will last forward.”

“What does that mean? No way, the power will be divided? What are you thinking, this guy?”Edward asked in an astonished manner.

He was the leader of the undead invading the empire, but no matter what, his roots were the imperial family of the Yusma Empire. He couldn’t stop himself from instinctively being surprised.

“Hasn’t the information entered your ears by now? The different species of the south.”

A corner of Hyeonu’s mouth curled up.

“Don’t tell me… you have even reached out to the different species?”

Edward’s eyes grew larger. This was how surprised he was. Hyeonu’s words weren’t easy to ignore.

“What are you trying to do? Are you going to shake the continent in your hands?”

“Don’t tell me… have you even extended your hand to the East Continent?”Edward wondered with a disbelieving expression.

“I have reached there, but don’t care about it.”

Hyeonu nodded. The Yuxin Empire and Hyeonu were somewhat closely related. They were bound by the relationship between the benefactor of the empire and the imperial family.

“You are a lot more dangerous than I thought.”

Vigilance immediately filled Edward’s eyes. They were ridiculous connections. It wasn’t at a level that a single adventurer could show.

“So don’t worry about anything. Just take in the adventurer and use them roughly as I said. There will be less than 10 people at first, but the number will increase quickly.”

Hyeonu spoke up to here and turned around. He had nothing else to talk about with Edward.

“You will be fine the next time I see you, Edward.”

Hyeonu waved his hand and disappeared.

[Defend the territory against the attack of the undead for 10 days 1/1.]

Hyeonu smiled at the message window that popped up in front of him. It was quite different from the other large guilds. He was promised a definite reward and participated in the city defense battles.

Hyeonu immediately tore a return scroll and moved to the capital, Yusma. He had satisfied the condition to clear the quest, so it was time to receive the reward.

“Your Majesty, I have come after protecting the north with conviction.”

Hyeonu greeted the emperor in an exaggerated manner at the thought of receiving rewards.

“I’ve heard good things about your performance. There are many rumors in the capital as well. it is to the point where everyone knows about the marquis’ performance, regardless of their status.”

[Defend the Cities has been cleared.]

[Experience has been acquired.]

[You have leveled up.]

[All health and magic power are restored.]

The quest was cleared at the emperor’s praise.

‘His words are a bit short today.’

Hyeonu liked that the conversation was progressing quickly. It meant his time alone with the emperor would decrease.

[The emperor’s gift has been acquired.]

[You have become a duke of the Yusma Empire.]

[The title will be changed.]

[The title ‘First to Become a Duke’ has been created.]

[First to Become a Duke]

[You are the first player to become a duke of the Yusma Empire. The title will grow as you rise in rank.

Effect: The stat ‘dignity’ is created and the damage dealt by opponents below the rank of duke is reduced by 50%. Damage dealt to those with a rank below marquis is increased by 25%.]

The reward was also paid immediately.

Promotion to a duke—he hadn’t wanted it, but he liked it because the effect was better than he thought.

‘It is much better than a marquis.’

Hyeonu was smiling at the changed title when the emperor continued speaking, “Duke Gang Hyeonu, I will continue to ask you to look after the empire in the future.”

The emperor waved his hand as if telling him to go quickly.

“The empire is my homeland. I will work harder for the prosperity and stability of the empire, Your Majesty.”

After the shocking meeting with Hyeonu, Edward greeted another visitor. This time, it was an unwelcome visitor.

“From what I see… I don’t think you are doing well.”

The uninvited guest seemed to have known Edward before. He knew how Edward was doing just by looking at Edward’s face.

“Did you come here just to say that, Alexander?”

Edward frowned when he saw the uninvited guest. The man in front of him was someone he really didn’t want to see. He was Edward’s only brother and the tyrant who deprived him of everything.

“I naturally didn’t come here to say this. I came to kill you before you are seen by the eyes of others,” the emperor uttered cruel words without blinking. He said he would take Edward’s life without hesitation.

“Now I can see in person that there is no need for that. It is hard, but you are overcoming it. Otherwise it wouldn’t be enough for someone with a blood relationship with me.”

It was a smile so wide that it glowed white.

“I might’ve been cast out by you, but… my roots are still the empire. Don’t insult me, Alexander.”

Edward felt a chill at the emperor’s smile. His hands would be trembling if he hadn’t clenched them into fists. He came out with great strength. He felt he would be eaten up if he showed weakness.

“Yes, you are of noble blood. Never forget that. I will appear before you the moment you lose your nobility.”

Sparks that were seven colors instantly burned in the emperor’s eyes. The hidden beast briefly appeared.

“Should I thank you for this…? I’m sure you will regret sparing my life, Alexander.”

Edward continued strongly to the end. It was an attempt not to be caught by an overwhelming feeling.

“Regret? Me? It is impossible for the present you. You aren’t my opponent, Edward. Then and now.”

The emperor scoffed and laughed loudly.

“I will say one last thing. I don’t know what you are doing with that guy, but… I hope you will listen to it. There will be a time when you find out that karma is scary.”

Just as Hyeonu did, the emperor turned and left Edward once he finished what he wanted to say. It was without listening to Edward’s answer.

‘That guy? It is definitely that human…’

Edward swept his palm several times over his arm. He had goosebumps. Alexander knew what happened a few days ago. He knew what happened in a place where humans weren’t allowed to enter. He didn’t seem to know the facts of the meeting, but he knew roughly what type of conversation had taken place.

‘Karma? What does he mean by karma?’

That wasn’t the only thing he didn’t understand. Listen to Hyeonu’s request. Additionally, the karma that would return to him. They were words that Edward couldn’t understand.

Edward suddenly felt pity for Hyeonu. Hyeonu had become the prey of that monster.