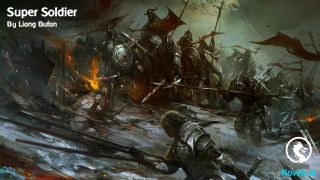 “Gasp, gasp!”Ray was breathing roughly, but he couldn’t afford to stop and restore his breathing. It was due to the eerie light flashing in front of him.

Ray rolled to the right without hesitation. The Mysterious Sky Sword passed by and slashed the spot where Ray had just been standing. Ray rolled over and over again without caring about the dirt on his body. In the meantime, he didn’t let go of his greatsword.

“You can’t win just by avoiding it, Ray. Your specs are more overwhelming than anyone else you will ever meet in the arena. You can’t be pushed back like this. There is no reason for you to lose a single moment.”Hyeonu never stopped moving the Mysterious Sky Sword even while uttering harsh words toward Ray, who was rolling on the ground.

On the contrary, he predicted Ray’s movements more sharply and blocked them.

-It is vicious, vicious.

-You should speak if you have feelings.If it were me, I would log out after feeling a sense of shame.

-How hard has he worked to hide this image of his for so long?

The viewers clicked their tongues and expressed their regret as they saw Hyeonu’s true face.

Hyeonu’s real training, which couldn’t be seen on the livestreams or A-World videos, made people feel truly nervous.

“You should be grateful to learn from me. That guy is really vicious. He is someone who can do anything for himself. It is simply a game, but my brother considers it his professional job,” Kim Seokjung said while approaching the stunned Jamie Moore.

Kim Seokjung continued to speak regardless of Jamie Moore’s attitude: “Do you know why the kids of Crescent Moon tremble when it comes time for training? They experienced something several times more serious than this. There is a reason they improved their skills. They were beaten, scolded, rolled over, and knocked down. They didn’t want to do that anymore, so while playing, they naturally improved. However, he doesn’t know that. Perhaps he is trying not to know or is pretending that he doesn’t know.”

Kim Seokjung laughed and patted Jamie Moore on the shoulder.“So work hard. You should improve your skills before going to my dongsaeng, so you won’t be like that.”

With a smile, Kim Seokjung went back to his spot.

-They can’t help but improve their skills.

-The extreme workers of Crescent Moon.

-Aren’t the kids who applied for New Moon going to withdraw their applications right now?ㅋㅋㅋㅋ

-He who wears the crown must endure the pain.ㅋㅋㅋㅋㅋㅋㅋㅋ.

-There seems to be a reason why Dwayne is always happy when filming movies these days.

-Mason always said that it is good he doesn’t have to practice PvP.

-There was a reason for it.

-Look at the hidden story ㅋㅋㅋㅋ

-There is a reason why Goddess Yuri said she doesn’t want to do PvP every day.

The viewers enjoyed it, but Jamie Moore couldn’t smile when he saw the chat window. Sooner or later, he would be the main person they talked about.

That bomb was turned toward his reliable subordinates.

Meanwhile, Kale was watching Hyeonu’s live stream when he suddenly trembled from the chill that shot through his body.

‘Has the heater been turned off?’

“Ken, is the heater off at the moment?”Kale spoke to the man entering the office with coffee.

The man called Ken glanced at the number on the heating remote control and replied with a smile, “No? It's on? The temperature is at 28 degrees. It's warm enough to wear just a t-shirt?”

“Why don’t you go to the hospital? You seem to be overworked. You are feeling cold while being in such a warm place.”

This was happening in a building in New York.

“Your attack is very fierce. If you swing like this in the arena, won’t your opponent be hit by sharp acupuncture from head to toe? Then it is good for them to save money. There is no need for them to go and get acupuncture done after fighting with you.”Hyeonu made a sharp remark to Ray who was wielding the sword. It was a creative accusation that went beyond mere possibility.

‘When will it end? Were 30 minutes always this long?’Ray swung the great sword, but he didn’t know how he was moving. He simply let go of his mind and left everything to his instincts.

“Tsk… He completely let go of his mind,”Kim Seokjung muttered when he saw Ray’s current state.

‘It's over already?’Hyeonu licked his lips with regret and took back the Mysterious Sky Sword.

“The 30 minutes are over. You’ve worked hard, Ray.”Hyeonu approached Ray, who was continuing to hold the greatsword in his hand without knowing the spar was over.

Just then, Ray’s body moved unknowingly. The greatsword emitted a white light as it swung toward Hyeonu.

“The spar is over,” Hyeonu told Ray again.

“Ah, yes. I’m sorry.”Ray regained his mind. Then he recalled what he had just done and bowed apologetically toward Hyeonu.

“It’s fine. It is something I’ve gone through more than once or twice. Your skills are much better than the other day. It is very satisfying. I think you can play in the arena rankings soon,”Hyeonu replied with a smile. Hyeonu wasn’t surprised that Ray suddenly swung the greatsword. He had many similar experiences before.

‘Hoon did it once or twice.’

Lee Hoon had often done the same thing to Hyeonu unintentionally. Having been too focused on the spar, Lee Hoon had been unable to properly judge the situation around him.

‘In addition, it wasn’t that threatening,’ Hyeonu thought. Crucially, Ray’s attack was slow. It might be fast for others, but in Hyeonu’s eyes, it was an attack that could be easily prevented.

-Is this a secret camera?

-He couldn’t hit Alley Leader until the end.

-In my opinion, I won’t be able to deal a blow against Alley Leader even until I die.

The viewers admired the strange scene.

Hyeonu had naturally blocked the seemingly unstoppable surprise attack. Moreover, he'd done so by grabbing the opponent’s weapon with his bare hand.

“This time, we will be watching the spar between Jamie Moore and Hyung-nim again. Will Jamie be able to escape from Hyung-nim today?”Hyeonu returned to his seat while being followed by Ray. In their place, Jamie Moore and Kim Seokjung moved to the center of the arena.

“You should be more nervous than before.”Kim Seokjung pulled out white gloves from his inventory and put them on.

“What?”Jamie Moore, who was walking to the center of the arena, stopped moving and turned to look at Kim Seokjung.

“I’m going to take it up a notch. I am telling you this so you can be determined in advance.”Kim Seokjung smiled. Then he bent his fingers and started stretching.“If you don’t want to be beaten up, roll well. Isn’t there something that you often say? If your head is bad, your body will suffer.”

“Today’s stream will end here. Thank you for watching my live stream today.”

Hyeonu naturally ended his live stream after the fourth confrontation between Gang Junggu and Ray.

“Can I appear again next time?”

“Hyung-nim, don’t you have the guild’s stream? You haven’t appeared there for a month, right?”

“Today was so much fun.”

“This was my first time appearing here. If there is a chance in the future, I would like to appear again. I hope this opportunity will come again.”

The moment Hyeonu’s words ended, the people present started saying their closing remarks, starting from Kim Seokjung to Gang Junggu, Reina, and Go Eunho. However, Ray and Jamie Moore were sitting down with pale faces and couldn’t say anything. The two of them were exhausted due to having been in a state of extreme concentration.

-It is obviously an opportunity in any sense.

-Yes, Eunho.No one else is showing anything like this.That’s why there are more than 10 million people watching.

Hyeonu looked at the chat window and nodded. He opened his mouth and said, “Yes, there is no other live stream like this. A very rare live stream that is the only one in A-World. Since you know it, please publicize it to the people around you.”

Hyeonu bowed toward the viewers.

-See you next time.

-Hurry and turn on the main scenario stream.

-There is no need to say much. Can’t you just turn it on directly?

-It is nice to see it from someone else’s point of view.Honestly, the emperor and Lebron only appear in Alley Leader’s perspective.

-To be honest, I think that only Alley Leader is showing the real main scenario.

The viewers shouted at Hyeonu. Hyeonu’s live stream today was very fun. The disastrous collapse of Ray and Jamie Moore was a problem for the people involved, but it was a good feast for the viewers' eyes. However, the viewers couldn’t be satisfied with just this.

Hyeonu’s next live stream was scheduled for three days later. Within three days, the battle at Tendmul would definitely take place.

The viewers wanted to see that battle—not from the livestreams of other people but from Hyeonu’s point of view. There was only one reason, which was that the emperor and Lebron would appear on it.

“I understand. I will think about it. Then see you next time.”

Hyeonu waved his hand at the viewers. Then the streaming screen turned black. The live stream ended.

“Thank you for appearing on my livestream today. I will pay you back for this favor.”

Hyeonu ended the livestream and thanked the people who helped with his stream today.

“That’s right, Hyung-nim. Isn’t there a saying that people are different when they go to the bathroom and when they return?”

‘The atmosphere is strange…’Hyeonu instinctively felt it. These two people were going to do something. Hyeonu’s intuition wasn’t wrong.

“Then you can repay the favor by buying dinner right away.”

“That is a very good opinion. Hyung-nim.”

Reina smiled and added strength to Kim Seokjung’s comment, “I like it. It is better to eat together than alone.”

"Me too. It is always welcome to have a meal with Hyung-nim.”Go Eunho was a fan of Hyeonu and couldn’t refuse a chance to eat with him.

The four people glanced at Hyeonu.

‘How can I refuse this?’

“Okay, I will see you today in Apgujeong. I’ll pay for the beef.”

Hyeonu was semi-forced to decide to go out.