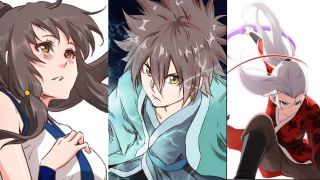 “If you dare touch my brother’s fingers again, next time, I’ll directly stab the branch into Ou Haoxuan’s eyes. Facial trauma can be repaired through plastic surgery, but I wonder if you guys are rich enough to fix eye trauma as well.” Ning Shu’s expression was unusually cold. She stretched out her tongue and licked the blood on Ou Haoxuan’s face.

“It tastes pretty good,” Ning Shu said with a smirk.

Let’s see who could be more twisted.

Min Haochu looked at Ning Shu carefully. “Do you know what you’re doing? You won’t be able to afford the consequences.”

“I’ll die at most. What is there to be afraid of?” Ning Shu’s face was calm.

“Die? You’re too naive.” Min Haochu wore a fox-like smile. “After what happened, you think you can die an easy death?”

Ning Shu didn’t care. “Even if I die an unpleasant death, I’ll be satisfied if I can drag you guys down to the Yellow Springs with me.”

Ning Shu slowly traced Ou Haoxuan’s face with the branch as she said, “You guys were the ones who drove me to this point, so give up on getting out of this situation easily.”

Min Haochu’s pupils shrank slightly, but he continued with a mocking expression, “How naive.”

The number of people in the sports field was increasing. Ou Haoxuan struggled harder after he noticed how many people were witnessing his circumstance. However, Ning Shu was so strong that his efforts were useless.

“Stop moving.” Ning Shu stomped on Min Haochu’s leg. Min Haochu immediately felt like his leg was about to break.

Yi Xiaodong had tears and snot all over his face. Ning Shu continued coaxing him, and he eventually got up from the ground and went towards Ning Shu.

Mu Yeyao still wanted to try and kick Yi Xiaodong to death, but he was stopped by Min Haochu.

Yi Xiaodong walked to Ning Shu’s side and immediately held tightly onto the hem of her shirt.

Ning Shu spoke with a smile, “There’s no way I can do that. If I let him go, we won’t be able to survive.”

“It can’t be that you think you can still have a good ending after doing something like this?” Mu Yeyao snorted. “Let him go and come fight me.”

“Are you an idiot? Who would want to fight you?” Ning Shu said bluntly.

“Xiaotong, let go of Young Master Ou.” The principal had come over with the school’s security team. When he saw the blood on Ou Haoxuan’s face, his expression immediately changed.

“If there’s any problem, just talk it through properly. Hurry and let go of him.” The principal’s voice changed due to shock. If the young master of the Ou family had an accident at school, he wouldn’t be able to escape having to take responsibility. Furthermore, he was the one that got Yi Xiaotong into this school.

The Ou family owned shares of the school, so the board of directors would definitely remove him from the principalship.

As the principal, he was stuck in the middle and was very anxious. He was inwardly regretting letting the siblings come to this school to study.

“Xiaotong, don’t make such a big deal out of this. Hurry up and let go of Young Master Ou!” shouted the principal.

Ning Shu said mildly, “Principal, if I let go of him, I won’t be able to live.”

“No matter what, you should still let go of Young Master Ou first,” said the principal anxiously, his expression filled with agitation and regret.

Ning Shu wrapped her arm around Ou Haoxuan’s neck and pulled him towards the school entrance. Yi Xiaodong held onto the corner of Ning Shu’s coat and slowly retreated with her.