“Becoming an offering does not mean death, but a chance for new life. Su Ming… you might have given up on this chance, but it will be difficult for you to escape reincarnation. I will wait for you in the cycle!

“This is just the beginning of our fight! It hasn’t ended yet! I, Old Man Extermination… will definitely take my revenge!!”

The entire fourth Expanse Cosmos crumbled. It shattered while rumbling, making it look like everything was about to be destroyed in the blink of an eye.

Su Ming was silent. He watched the destruction around him before turning into a long arc that charged towards the gap leading to the Vast Expanse. Then, in an instant, he rushed out of his homeland!

While in the vast universe, for the first time ever, Su Ming… saw the huge Feng Shui compass. It was so big that its end could not be seen.

Su Ming also saw the withered Harmonious Morus Alba under the Feng Shui compass being continuously absorbed. Its four wings were overlapping with each other while being burned by invisible flames that slowly turned them to ash.

Vaguely, Su Ming thought he could see Arid Triad and hear his murmurs.

Arid Triad vanished, and even the four Great True Worlds, Divine Essence Star Ocean, and everything else was reduced to nothingness before Su Ming’s eyes.

The past had become something distant, untouchable. Dark Mountain, ninth summit, the Berserkers, Morning Dao—everything was like fleeting smoke. They gradually faded away, slowly turning into mere memories that would support him so that he could continue onward while alone in the vast universe.

Loneliness seemed to have never left Su Ming. Most of his life after he left Dark Mountain had been like that. It was like a pot of old wine. When he drank with the moon, he could only perform a toast to his shadow…

The winds of time swept up the flowing sand of memories, and it no longer filled a world where he sat in the middle of the night while meditating. The figures in his memories seemed to be near him, whispering words of a beautiful past. Right then, however, they sounded desolate when he heard them while watching the Harmonious Morus Alba being destroyed.

He once wondered whether the glorious past which he lived for thousands of years and which he would see when he turned his head back would exist for tens of thousands of years to become a ballad for the members of the latter generation, but as he watched Harmonious Morus Alba gradually wither… he understood that there would be no continuation.

The song from yesterday could no longer resonate with tomorrow. The murmurs recollecting the past could no longer find any notes from a zither to act as an accompaniment.

Watching the universe’s rise and fall was a luxurious desire of other people. It might seem beautiful, but those who experienced it would know that the destruction contained a mournful cry that no one else would understand.

Tears trickled down the corners of Su Ming’s eyes.

He was the only one left in the world, and no one could see the tears falling down his face, much less ask him about them. The only things left were the Harmonious Morus Alba who was slowly withering to become wisps of aura as well as a lone figure which seemed to be at the verge of death. It had dull and lifeless eyes.

That figure was filled with desolation…

Harmonious Morus Alba disappeared without a single sound. There was no astonishing rumble, no shrill and forlorn cry that would stun the people. There was only death that left behind no traces, as if someone had just woken up from a dream.

Su Ming was silent. He still had many things he had not done. The remnant of the old man from Heavenly Spirit Tribe still remained in his storage bag as well as the other Yu Xuan’s sleeping body.

At that moment, they became his most precious memories, but thank the heavens… that he still had the bald crane with him.

It had appeared beside him at some unknown point in time to keep him company. They watched Harmonious Morus Alba’s destruction together.

They continued staring until a cold and dark voice came from the Feng Shui compass.

At the instant this voice echoed in space, a loud rumble shot out from the Feng Shui compass before it began rotating. It did not spin quickly, but it did manage to form an astonishing whirlwind that swept through the universe around them. Then, for the first time, the black-robed young man sitting on the Feng Shui compass… truly appeared before Su Ming’s eyes!

He was dressed in a black robe, and his body was so huge that it was difficult to imagine. His dull and lifeless eyes seemed to contain a merciless, aloof look at first glance, but in truth, it was only due to a thick aura of death surrounding him. His cold and dark face seemed to not have changed since an eternity ago, and right then, he was looking at Su Ming.

Xuan Zang did not have sight, but at that moment, Su Ming could clearly sense him staring at him.

More accurately speaking, Xuan Zang was not staring at Su Ming… but at the bald crane beside him!

The bald crane shuddered. When it lifted its head, it stared at Xuan Zang, and a powerful feeling that it was staring at its mortal enemy rose in its heart.

It was also during that instant that Su Ming saw the string of pearls in Xuan Zang’s right hand. He had his fingers pinched around one of them, and it was shining with a dark light. Within it, Su Ming saw the shadow of a crane.

That shadow… belonged to the bald crane!

At the instant Su Ming saw the pearl clearly, his eyes shrank, and Xuan Zang slowly lifted his right hand. Then, with the pearl between his fingers, he slowly extended his hand towards Su Ming as if he was about to seize space.

With it, a circular area of tens of thousands of lis around Su Ming instantly roared at a volume that could shake the sky. The universe seemed about to crumble and tumble backwards. A powerful gust of wind that made Su Ming’s robes and hair flutter instantly appeared, and soon after, Su Ming saw the world before him turn into a huge palm. With a momentum that could throw the entire universe into chaos, it came charging towards him.

The bald crane shuddered, and Su Ming’s eyes turned bloodshot. He swung his arm and immediately swept up the bald crane to put it back into his storage bag. Then, he turned into a long arc that swiftly moved back.

But no matter how fast he was, it was impossible for him to outrun the palm that could practically replace the entire region of the universe. It instantly closed in on him, and when it stretched out, it went to grab him.

Su Ming threw his head back and growled. He brought his hands and formed a seal. His Dao Divinity immediately appeared to cover his body, but the method that could previously make Xuan Zang’s finger stop in its tracks was not effective anymore.

Xuan Zang’s right hand closed in on him!

Su Ming’s pupils shrank. The presence of his Dao Divinity did not go away, but once it gathered around him, he brought his right hand up. At the instant he clenched his fists, his body grew; he used the God of Berserkers Transformation. In the span of a breath, Su Ming grew to nearly one thousand feet tall. With all his power, he sent his most powerful blow at the incoming palm.

The universe started trembling furiously at that instant, and Su Ming shuddered. His body fell back like a kite with its string snapped. He coughed up seven consecutive mouthfuls of blood, and his body shattered. The legs that he had formed crumbled, his left arm disappeared, and only half his body remained.

His presence became incredibly weak. When he fell back, a madness born due to unwillingness to admit defeat appeared in his eyes, but it could not stop his body from being pushed back.

The disparity in strength between him and Xuan Zang was far too great. It was simply impossible for Su Ming to fight against him. At the instant his body stopped, the right hand from Xuan Zang came towards him again. The bald crane’s shadow in the pearl pinched between Xuan Zang’s fingers shone even more brilliantly than before!

“Give me… the seventh Reversed Spirit… and you… can leave…”

Xuan Zang’s cold and dark voice echoed in the universe as the palm came to seize its target, but Su Ming’s answer was his laughter and a fearless madness.

He was going to execute Possession. Even if his act of Possessing Xuan Zang at that moment would just be like an egg being thrown at a rock, Su Ming knew that if he did not Possess him right then, there was a high possibility that he would not have the chance to do it again!

Even if… their states of being were completely different and Su Ming’s chances of success were slim to none, he had to try it if there was the smallest chance of success.

Because only by doing so could he protect the bald crane. He absolutely would not just watch helplessly as the bald crane ended up the same as the people from Ninth Summit…

Su Ming knew that Xuan Zang only wanted the bald crane, and if he gave up on it to leave on his own, he would no longer have to face the life-threatening disaster. If he did that, he could just leave and go far away from Xuan Zang and live in the vast universe.

Then, one day, when Su Ming completely stepped into Boundless Dao, he could engage in a battle to the death against Xuan Zang. This was, logically speaking, the path Su Ming should choose!

Only by doing so would his chances of success grow higher.

But if the price for that decision was to give up on the bald crane… Su Ming would rather not take it!

He could not give up on his friends. If he could turn his back on the bald crane to have a chance to resurrect everyone, then if he had to choose to give up on another life in the future, how would he choose?

Su Ming would not choose that sort of life!

Giving up—those two words had never appeared in Su Ming’s life before… and they would absolutely not appear in the future either!

“I… will absolutely not give up!”

Resolve showed up in Su Ming’s eyes, but right then, in his storage bag, the bald crane erupted with an even crazier determination! 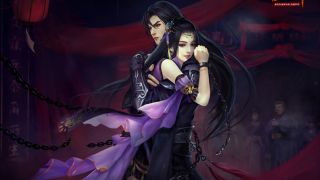