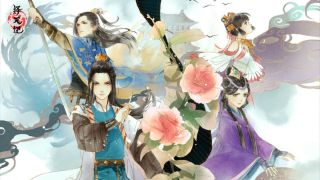 Apparently, it was not Ji Ziming or Manager Wang but these female employees, instead. Compared to Ellie, the others were more fortunate for not offending Qu Jingwan. Furthermore, she would not feel inclined to haggle with these lowly employees.

Back then, Ellie did not think that there was anything good about Pei Ge, yet only this woman stood up for her in this crowd.

She used to think that Pei Ge was not exceptionally beautiful and her work was not too outstanding. To her surprise, many people loved to cooperate with Pei Ge’s company and even their hard-to-please senior CEO had great admiration for Pei Ge.

Ellie thought that this woman only managed to be where she was by relying on Ji Ziming, but after today, her misunderstanding of the woman went out of the window. Perhaps this couple was meant to be, and she, the thousand-year dreamer, should finally wake up from her dream.

“Madam, thank you,” she said sincerely, truly grateful this time. Her slightly smudged makeup made her look haggard, but that did not affect her charisma or her reputation as one of the most beautiful women in the company. She had numerous suitors, but because she was being cared for by Ji Ziming, she only wanted to marry him.

Nevertheless, right now, Pei Ge was the most suitable for the man.

Pining for someone incompatible with her could only stop here. At that moment, she erased all fantasies she had about the CEO.

“Madam, I can see that Miss Qu isn’t a nice person; you should be careful.”

After receiving a blow from that missy, she decided to keep a lookout as she gave this warning to Pei Ge.

“Okay, don’t worry about it. Since your car is ruined, let the Ji family’s car bring you home.”

Pei Ge’s eyes seemed to love smiling. She did not think of Qu Jingwan as someone difficult to handle because she firmly believed that the latter could never beat her.

Ellie thanked her for her good intention.

It was already very nice of her to help her out. If she were to take the Ji family’s car back home, she would be the most embarrassed.

“Don’t be polite; He Yun will arrive in three minutes.”

Seeing the two appreciating each other, Ji Ziming walked to them and smiled at Pei Ge. “Ellie, go to the entrance; He Yun should be waiting for you there.”

Her eyes lingered on the man. She did not wish to give up on him, but she could not bear to see the love in his eyes for Pei Ge.

“Don’t be polite. This is what I should do. Plus, my wife has instructed me to do so, too.”

He did not mind the way this employee looked at him. Ever since he started taking care of her brother, he had known that she harbored feelings more complicated than how a subordinate would treat their superior, but he did not mind it. As long as Pei Ge was by his side, all other women would be mere decorations.

Ellie wanted to say further but saw the bright smile on his face which was unlike the usual him. He gently caressed Pei Ge’s head, his fingers brushing across her face.

She took a deep breath; the surroundings turned quiet.

Seeing the man she loved the most acting gentle and endearing toward Pei Ge, for a second, she wanted his eyes to be on her, wait for him forever, and use all her skills to make him the crowned hero.

However, with this woman’s appearance, everything changed.

In the past, she could fantasize and even cherish this man’s innocuous gift like treasure; at present, she knew that it was time for her to wake up from her dream.

“What did you want to say earlier?”

He only recalled that Ellie wanted to tell him something after he was done talking to his woman. As his mind was on what to do after seeing Qu Jingwan tonight, he completely neglected this employee’s presence.

“Nothing.” Ellie shook her head. “Thank you sir, ma’am. I’ll go to the entrance to wait for Mr. He Yun’s car.”

After saying this, she left the place with the setting sun shining on her.

There was nothing sadder for her than knowing that it was impossible for the two of them to be together. One might understand some people were just not meant to be, but it was hard for them to quit loving someone as though it were an addiction. Once one was addicted, it would be difficult to quit; furthermore, Ellie had been secretly in love with her boss for so many years.

Sitting in the car, she fastened the seatbelt and leaned against the window without speaking to He Yun. The latter sensed that something was off with her and thought that she was acting like this because of the car. He comforted her as he drove.

“Ellie, the car will be fine eventually. Haven’t all the clues pointed to Qu Jingwan? Don’t be too nervous; the CEO will likely buy you another car after this.”

He kept speaking but the woman did not move. She closed her eyes as tears streamed down her face.

She really needed time alone to release all her emotions. She had unrequited love for that person for the longest time, and no matter how long she had waited for him, she would only be his most capable subordinate and not a wife whom he could be proud of.

Ji Ziming was also driving Pei Ge back home. When they were halfway there, she received a call from Zhang Manhua. According to the time zone, it should be morning on her mother’s side.

“Mom, why are you calling me?”

Her anxious voice came through. “Let me ask you: Did you continue investigating Xiaoyu’s whereabouts after returning to China. I was awakened by Gu Zhengrong’s call earlier as he called to ask if I have any news, so I naturally said no; I called to ask if you have any.”

“Mom, don’t worry; nothing will happen to her. She left of her accord and was not taken away. If he really cares, let him find himself.”

Pei Ge was unhappy the moment she thought of Gu Zhengrong. There was even a look of disgust in her eyes.

“I told him that, too, but the young man insisted on getting me to call you.”

She understood that that guy had sacrificed sleep to disturb her mother because he could not ask her himself.

“Tell him that I don’t have information.”