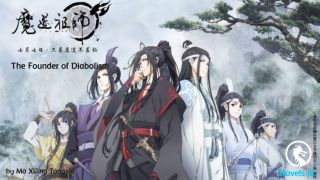 Seeing that there was no noise from the bathroom, Xia Yanran didn’t know what to do. She reached out and pushed the door open lightly.

The man was leaning against the wall, looking down as he…

Xia Yanran widened her eyes slightly, a little flabbergasted as she swallowed back the words she wanted to say.

The man who was looking down suddenly looked up at her.

There was nothing going on with her anymore. With his situation, he probably wouldn’t run out after her. However, at the thought of a big boss like him doing it himself… Cough, Xia Yanran couldn’t control herself and started to laugh the moment she closed the door.

She thought that he wouldn’t hear her, since she was laughing very carefully.

Indeed, Xiao Yi didn’t hear her laughter. However, when the door was closed, he saw her lips curl up. His handsome expression immediately darkened completely.

It was awkward enough already, but she still dared to laugh at him!

After Xia Yanran closed the door, she heard the man’s footsteps. Feeling danger, she froze for a second before she ran towards the bedroom door hurriedly.

She had just opened the door when the door was pushed closed once more with a loud bang.

Xia Yanran was forced to turn around, her eyes meeting the man’s suppressed and burning dark eyes. It was as if Xia Yanran had been frozen in place, unable to move anymore.

Xia Yanran’s hands by her sides curled up unconsciously.

“I actually… Hmph.” She wanted to say that she didn’t want to see him doing it on purpose, only scared that something had happened to him with the quietness in the bathroom and him not coming out.

However, he didn’t want to hear any of her explanation. He felt miserable all over. He wasn’t a saint and was rather tolerant of her already. However, right now, she had sent herself to him and he didn’t want to hold back anymore.

He wanted her to be his antidote.

That was what he thought when he smelled the difference in the fragrance back in the clubhouse’s room.

Xia Yanran was pushed against the door as he grabbed her chin and his lips pressed onto hers, domineering and intense.

His breathing was extremely rushed and heavy, spraying heavily on her. Her senses were surrounded by his warm and intense breathing.

Xia Yanran felt her legs go weak. She felt like she was about to lose the determination to resist.

In their relationship, he was the domineering one most of the time.

She didn’t want it to be like that anymore…

However, he didn’t give her any chance, carrying her up and placing her back on the bed.

The scorching hot kiss landed on her lips impatiently, ravaging her lips before he pushed her mouth apart, his tongue entering her mouth to conquer her tongue.

His slender and strong fingers brushed through her hair, resting tightly at the back of her head, not letting her move away or resist her.

Xia Yanran felt half-forced and half-willing. As he ravaged her, her mind went blank. She didn’t know what she could do apart from letting him do what he wanted.

The breath laced with a faint alcohol scent landed on her cheeks and neck, acting like small bugs that burrowed into her skin. It was tingling and numbing at the same time. She closed her eyes, lashes fluttering slightly as her rationality and consciousness faded away.

As if feeling her give in, his kiss became even deeper as her cheeks flushed completely.

Even though they were not strangers to each other, it had been very long since they broke up and weren’t together. The sudden intense emotions made them feel the long-lost flutters and emotions for each other.

Just as she was dazed from the kiss, he suddenly let go of her. The weight on her disappeared and Xia Yanran took the chance to catch her breath, feeling like she was about to suffocate from the kiss.

Her scarlet lips parted slightly, as she opened her dazed and pretty eyes to look at the man standing beside the bed.

He didn’t leave, tugging his wet clothes off himself instead.

As his clothes were wet, the buttons didn’t come off so easily. He was short-tempered usually, so half-way through his buttons, he chose to tug them apart instead. The expensive buttons landed on the wooden floor, knocking against the floor crisply when they did.

After he took off his shirt, he undid his belt casually once more.

When he took off his clothes, his dark and burning eyes never left her face. His forehead was covered in sweat, his breathing heavy as his red eyes showed that he was reaching his limit.

He got on the bed once more, his handsome face leaning towards her. Even though he felt like he was about to explode, he still kissed her patiently, from her cheeks to her ears. His voice was hoarse and deep. “I’m going to do it, don’t kick my face again later.”

Xia Yanran met his eyes, feeling like a deer had hidden in her heart as it thumped crazily. She didn’t know why, but his words made her heart softened intensely.

However, she couldn’t help but scold, “As*hole.”

He leaned down to bit at her lips, their breaths interlacing with each other. His red eyes sparkled at her. “Yanran, do you still like me?”

He smirked, revealing his white teeth as he chuckled darkly.

His heavy panting sprayed at her sensitive ears once more, muttering something that was extremely shameless before he kissed her once more without waiting for Xia Yanran to reply.

Xia Yanran grabbed his hair tightly with both hands. She wanted to push him away, but her hands seemed to lose energy while she moaned softly from his kisses.

To be honest, she hadn’t made the decision of whether she should be with him or not. She wanted to see what he would do for her in the month she asked for.

After all, they had feelings for each other. Seeing him hold back with so much difficulty, and at the thought of the sweet and happy times he used to give her, her heart softened for him.

Sometimes, women were that emotional.

It was not that she really wanted to do it with him, but it was because she had feelings for him in her heart.

Feeling her daze out, he looked up from her neck, staring at her with red eyes as he said hoarsely, “Yanran, after you asked for a break up, I never touched any other woman. It has always been you, can you continue to be mine?”

Xia Yanran knew that he was an animal, but he was even more of an animal after being drugged.

After the nth time, Xia Yanran really wanted to kick him, but she didn’t even have the energy to lift her legs.

“Xiao Yi, if you continue to bully me, I’ll really ignore you.” Her eyes were red, tears still present on her cheeks.

Seeing her exhausted look, he hugged her, leaning down to kiss her tears away. “You foolish girl, how am I bullying you? I’m doting on you.”

Xia Yanran curled the blanket around her, rolling to the side of the bed to ignore him.