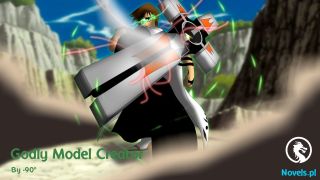 "…" Wei Wuyin turned his head towards the voice, his expression reflecting indifference and tranquility. The footsteps stopped after he turned his focus. The approaching figure halted a notable distance away, roughly twenty or so meters. Their breathing had also settled.

Wei Wuyin felt a deeply investigative and probing gaze on his body, unable to make out any other details of this new arrival. The faint scent of blood permeated the air as time elongated between this odd standoff.

"…You don't seem like a newbie." The voice spoke out, and the mocking and playfulness dissipated, replaced by a voice tainted with seriousness. The voice was masculine in nature, not particularly deep nor high.

"You don't seem like one who courts death," Wei Wuyin calmly countered. It was as if he dismissed the entirety of this individual's existence. At the moment, Wei Wuyin was unsure of his situation and there was no exposition giver of the finer details here, so he was unable to understand who this person was or the intent of this Nexus Battlefield.

However, this was a Battlefield, so some things were self-explanatory. For example, fighting and death were centralized concepts explored thoroughly here. The initial words of this individual alluded to at least that much, and the smell of fresh blood lingered in the air.

"Oh? What do you mean by that?" The voice slowly grew deeper, carrying aggression and a rising ferocity. The smell of blood thickened with every passing second that remained silent. The tension in the air stifled the world. If this created atmosphere was indicative of anything, it was the prelude of a bloody battle.

"…" Wei Wuyin remained silent. Turning his head elsewhere, he brought his hand before his face and thought for a long moment. This Nexus Battlefield was very different from the Battlefield from earlier. Firstly, the suppression of spiritual strength and astral force was far, far greater than before. He could bȧrėly grasp a single meter of distance around him with all four Astral Souls unsealed.

Secondly, his physique had been pushed to its physical energy limits. If it was an ordinary cultivator, this might be a minor matter, but he was a cultivator that possessed four Astral Souls, a Draconic Void Heart and True Dragon Bloodline, and had taken an astonishing amount of physical energy enhancement products. He had never thought of being able to refine his physique prior to the Star Core Phase, so this was a pleasant yet curious surprise.

"You dare take your attention off your enemy? Do you consider me air?" The voice was faintly shocked and enraged, finding Wei Wuyin's dismissive actions infuriating, especially considering where they were and what their positions were.

Wei Wuyin didn't answer his question, merely asking: "Are you my ally?" From the vocal range, he eliminated the possibility of the voice belonging to a titan, so it was possible the voice belonged to a human.

"…what? Allies?" The voice was perplexed by the question, unsure what Wei Wuyin meant by this. Was he truly a newbie or was this some strange manner of trying to form an alliance?

"I see," Wei Wuyin nodded. He then said, "What? Is being an ally with a member of the human race beneath you?"

"…" There was a silence followed by a heavy scoff. "You are a newbie," the voice said in an absolute statement. There was a footstep that pressed forward, sliding slightly against the earth. Wei Wuyin could tell the voice was about to launch an attack, getting into some type of stance from these sounds.

"Oh?" Wei Wuyin turned towards the voice and placed a faint smile on his indifferent face. "What makes you say that?"

"Enough!" The voice shouted aggressively, clearly catching on with Wei Wuyin's intentions. "You think you can use me to sound out answers? You think I'm an idiot? Just die!" The voice grunted and his footsteps became rapid and firm. Each step was stable and measured, and Wei Wuyin could hear the faint sound of metal cutting through the air.

Wei Wuyin reacted swiftly, twisting to face the voice fully, and then lowering his posture. With a step backwards, he dodged an oncoming strike that sliced the thick air with incredible sharpness. The feeling of air grazing the skin of his neck was incredibly apparent.

Wei Wuyin's spiritual sense expanded to its limits, grasping the details of the weapon in question, but not its wielder. A long bident dyed in black with specks of fresh blood on its blades' edges and tips.

Wei Wuyin gauged the angle and length of what he could observe, locating the general area of its wielder. With a steady step forward, he leaned in and lanced with his right fist towards the location he believed the torso to be. His movements were so smooth, so swift, that only an exclamation of shock resounded before a sharp series of bone cracks thundered the air.

Wei Wuyin felt his fist impact padded armor, likely similar to his own gambeson, and the force it carried pierced through the padding and pushed onwards into his abdomen. For a split second, Wei Wuyin felt the hardened ribs beneath the armor attempt to protect the inner organs, yet it gave way as easily as the armor did with a resounding crack, and that fist dug deeply into the flesh of this enemy after. Wei Wuyin felt organs at the end of it touch his knuckles.

"UGH!" The sound of air being knocked out of one's lungs, including a wad of acidic stomach fluids and blood spurting out against one's will. It splattered Wei Wuyin's face, yet he added a step forward, throwing the weight of his body further into the strike.

The sound of skidding against hard ground followed the sounds of a body pushed through the air, brought down by the gravity afterwards.

"Gah…ugh! Ho-how?!" The voice shouted out in shock between gurgles of blood and gasps of air.

Wei Wuyin ignored the voice, standing upright and glancing at his fist in wonder. After wiping off the bodily fluids on his cheek with his sleeve, he couldn't help but look at the direction where the voice tried to gather himself, attempting to stand up with a struggle.

"So my ȧssumption was correct. Interesting," Wei Wuyin commented to himself. His physique was elevated to the standards of his physical energies. For other cultivators, this might not be impressive or heaven-defying, but to him who refined his physical energies to an extreme limit of his cultivation realm, had higher physical energy limits thanks to his Void Dragon Bloodline, this gave him an insidiously unfair advantage.

Unfortunately, he realized all his forces, including Alchemic Eden Force, were hindered just as severely as the rest. The restrictions here were indiscriminate. If not, he would freely and unhesitatingly scan through this cultivator's memories. However, he didn't want the restriction to impact his precision and interfere or outright cause it to fail with catastrophic consequences.

Turning his attention to the voice, Wei Wuyin gave a faint smile, "You up for some questions? If so, I can consider not killing you. Of course, that depends…on how detailed and useful this information is."

Wei Wuyin kept a distance, but the voice's grunts and breathing through gritted teeth revealed his vexation and fear.

"…You're after the Obelisk of War?" The voice asked between pants, almost sounding defeated entirely.

Wei Wuyin's smile deepened and he didn't answer, "You up for it? Or shall I allow you to catch your date with death. After all, you've courted it quite thoroughly before. Would be a little disappointing if you missed it, what do you think?"

"…" The voice didn't respond yet the tension in the air lessened considerably.