Support
Random Novel
Drop!! ～A Tale of the Fragrance 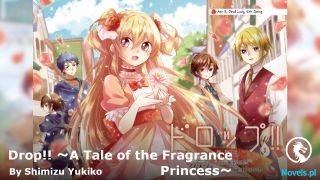 Pon, Vantner, Regas, Peak Sword, and Zednos in the Overgeared Guild all had normal classes. Among the top 10 in the unified rankings, the only one with a hidden class was Agnus.

That’s right—originally, the most important concept in Satisfy was control, not class. Satisfy was the game that people confident in their control hoped for. However, the game had long since changed. Was it because Grid’s items had developed? No, this wasn’t the fundamental problem.

The reason that the gap between normal and hidden classes was difficult to overcome with control was due the diversity of abnormal statuses skills. Think of the early days of Satisfy—at most, people possessed two or three skills that caused abnormal statuses, and ‘stun’ was the most powerful one. Over time, there was the third class advancement and more hidden classes were obtained. The type and number of skills that caused abnormal statuses increased significantly. There were too many risks to be considered in battle.

In other words, it became a fucking game of abnormal statuses.

‘Now there is a chance.’

The high rankers with a normal class had completed their third class advancement and adapted perfectly to their new strengths. In the current world of abnormal status conditions, they weren’t easily incapacitated because they made sufficient preparations.

Then what about the ones with a hidden class? They had resisted abnormal statuses for months or even years, and naturally developed a bad habit. They allowed themselves to be hit by skills that caused abnormal statuses without being vigilant. They learned it was more efficient to destroy the target by quickly attacking, rather than paying attention to pointless attacks being thrown at them.

Halle smiled as he recalled the expressions they all showed when their resistance was neutralized.

‘These guys need to know. The reason they have reigned isn’t because they are great. It is just that the privileges they received were great.’

Halle distrusted the concept of effort. He hated humans who placed the word ‘effort’ in their mouths. Business, sports, studying, etc. The best people in each field didn’t reach their current position because of their effort, but instead it was because of their talent and luck. It was proof that effort wasn’t exclusive to the best.

Were there any high rankers who put in less effort than the old Kraugel or the current Grid? Of course not. All the high rankers worked hard in the same way. All the rankers reduced their eating and sleeping time, only focusing on the game. They also researched the game in their everyday life.

However, Halle was limited to being stuck at 54th place on the unified rankings, and there were many people who were worse than Halle. It meant the value of their effort was different. The value of someone’s effort was determined by their talent and luck.

These were Halle’s thoughts.

The high rankers were just lucky to have better talent than other people, and among them, those who changed to a hidden class just had better luck. The world who treated them as heroes was just ignorant and pitiful.

‘They don’t know these people are a plague draining the life of the game.’

Halle bet everything on Satisfy. The ruin of Satisfy was nothing more than the ruin of his own life.

‘I can’t let those who believe in innate luck ruin the balance that is controlling my life.’

A notification window popped up in front of Halle as he strengthened his motivation.

[You have entered the territory of the Overgeared KIngdom.]

[The heat of the desert has increased fatigue.]

At the same time, the coachman spoke. “This is Reidan.”

“I will serve you well.”

A carriage pulled by camels. It was a surprisingly good ride.

Halle turned his attention back to the window and one of his party members asked him, “Will Yura really come to Reidan?”

Yura was known to spend most of her time in hell. It was because the class called Demon Slayer exerted its real power in hell. In the human world, she was weaker than other legendary classes. For this reason, Yura became a target. Unlike Jishuka, who only became a legend recently, Yura was a better hunting target.

“She will definitely come because it is the day of Nyangmong’s Festival.”

Nyangmong, an ID that was created by mixing a cat’s crying and a dog’s barking, was an ID that would make people feel that a child could do better. However, no one in the world would laugh at Nyangmong. Pet Master—he had a unique class and he was one of the backbone of the Overgeared Kingdom. He was able to establish friendly relations with all types of wild animals and monsters so thousands of people in the Overgeared Kingdom could safely travel through the rivers and mountains for economic activities. Additionally, the Wyvern Group that the Overgeared Kingdom started to operate on a trial basis a few months ago was created by Nyangmong.

“The festival has been held twice a year since Nyangmong has become the representative of the lord.”

The name of the festival was Nyangmong’s Festival and it was a festival where hundreds of animals and monsters marched through the city. It was very popular around the world because it was spectacular to see animals and monsters together in a procession without distinguishing between herbivores and carnivores. The number of players visiting Reidan increased by 2000% during the festival and it could be inferred that the economic value was great.

“Nyangmong’s Festival has become an important festival for the Overgeared Kingdom. They have to pay attention to the security, so Yura attends every festival.”

“You mean that the legendary class Yura is used as an escort? That is a real luxury.”

“Luxury? Is that true? In fact, Nyangmong’s Festival is more of a military parade than a festival.”

“It is a military parade that shows one hidden class player can exert influence over hundreds of animals and monsters, which can serve as an army. It is a much more important festival than what is known on the surface so it isn’t a luxury to attach Yura as an escort.”

“Hidden class… it is poison! It is a lump of cancer that must be cut out for the peace of the world!”

Halle’s associates realized that there were two targets today, not one.

“Oh my, you’re beautiful. I don’t know who your parents are, but they have given you so much love.”

Nyangmong had heart-shaped eyes as he touched and hugged the stray cats and dogs gathered for today’s event. It took him a lot of time to show affection to hundreds of animals one by one, but it wasn’t a problem. This was why he set the festival time to the afternoon in the first place!

“Our reliable worms and bull uncles have arrived.”

He stroked the back of the giant worms that rose from the ground and surprised the soldiers. Additionally, he took off the fedora he was wearing and placed it on a minotaur’s head.

“Hahaha, now you are a gentleman.”

A light flashed in the red eyes of the minotaur wearing the hat and it snorted. It looked happy.

The knights looked dazed because they couldn’t adjust to the atmosphere. Nyangmong asked them, “Is the street control going well?”

“Yes! We have thoroughly deployed soldiers to ensure the safety of the people and tourists aren’t affected!”

“What about the arrangement of food and snacks?”

“Yes! All the streets are full of food so that the cats and dogs can eat anytime and anywhere!”

“You’ve worked hard. Always pay close attention to the animals… take responsibility for the safety of the animals and people.”

“Yes! Leave it to us! We will carry out the order in the name of Nyangmong!”

In fact, Reidan’s knights and soldiers had been confused. Nyangmong was appointed as the lord’s representative soon after Zednos was appointed the new lord. However, he was neither a military officer nor a civil officer. He was just an animal loving person who cherished the street cats that harassed the merchants and the wild dogs that made children pee. They wondered if it was okay for such a person to become the lord’s representative. They questioned the choice of Prime Minister Lauel for the first time.

However, the current Reidan had made great strides. The street cats helped merchants transport fish and the wild dogs protected children from monsters. The giant worms who drove the soldiers into a desperate corner due to their ferociousness became docile and the guardians of the desert. Economic activity increased as people were able to move freely around territories.

The peak of it was Nyangmong’s Festival The people were happy as they greeted the tourists who flocked to the festivities held twice per year—once in spring, and another in autumn.

‘The lord of Reidan has been great from generation to generation!’

Reidan was called the second capital of the Overgeared Kingdom and the pride of the people of Reidan was great. The genealogy that went from Grid to Chris, Zednos, and Nyangmong made the people’s pride even stronger. Enthusiastic knights and soldiers scattered to their respective locations to fulfill their mission while Nyangmong took care of the animals until the time for the festival arrived.

He wanted to let the whole world know these kids’ beautiful and adorable appearance. He wanted everyone in the world to love these kids. Nyangmong fully combed the fur of the cats and dogs and opened the gates of the lord’s castle.

Just then, the soldiers guarding outside the gates coughed up blood and collapsed.

They were caught off guard. The intruders took advantage of the knights and soldiers being distributed throughout the city and found it easy to break into the castle. Nyangmong’s expression stiffened as an unidentified person appeared in front of him.

“I don’t see Yura. It seems long-term peace has made even the Overgeared Guild careless.”

Nyangmong gulped and asked, “Who are you?”

The intruder replied, “Those who have gathered their will to pull down the minority for the majority. We are revolutionaries.”

“…Aren’t the giant worms and minotaurs participating in the procession? They can’t protect you. Now die for the cause.”

Halle kicked off from the ground and aimed a kick at Nyangmong’s face. He would deal one hit first and then do a spinning back kick to hit the abdomen. However, Nyangmong unexpectedly avoided his attack despite Nyangmong himself being known for having no combat ability. It was also in a breathtaking manner.

‘He isn’t very fast, but what are these reflexes?’

Nyangmong stared at the surprised Halle.

“I am the butler of 13 cats. Do you think a surprise attack from you will work when I have been training and dealing with the attacks of masters coming at me in the dark every day?”

“You are really talking bullsh*t like a dog. It doesn’t matter if you die early or late. You will still die.”

Halle released a fierce pressure—it was the pressure of an Asura, the third advancement class that only three people had acquired since Regas, and a class whose difficulty to acquire was classified as atrocious.

The frightened Nyangmong scattered the cats and dogs by throwing food everywhere.

Halle’s fist shot forward like a beam of light and pierced Nyangmong’s chest.