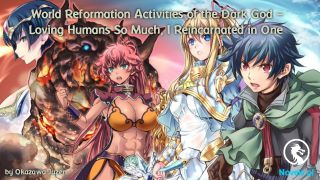 Quinn was concerned about everyone in the Cursed members, from those who had been with him for a long time, such as Alex, to those he hadn’t known for long before he went into slumber, such as Hayley.

However, he believed that most of them would have chosen to live their life freely until the end, and hopefully hadn’t got involved in all of the current mess that was going on.

“I am sure you want to know more about what happened to everyone in the Cursed faction,” Logan said, smiling at them.

“The Cursed faction is not really known to the current generation, but I knew you would care about them all.”

“I have, to the best of my ability, kept track of all members of the Cursed faction for the longest amount of time, whether they know it or not.”

“But, I have not been in contact with most of them; please keep that in mind while you see the next slides.”

Behind Logan, the screen started to change once again, and the first image that appeared was surprisingly of Alex Way, the forger that Quinn had later turned into a subclass called the Blood Fairy.

“Now, before I continue, I want to state that most of the members of the Cursed faction lived a fulfilling and long life.”

“So if you do not see them on this list, it’s alright to assume that they had lived through the peaceful years that you had created, Quinn.”

“In fact, Alex Way was one of them. However, as time went on, Alex became a legendary renowned weapon forger due to his skills.”

“He was one of the few people who could create a Demon tier weapon that would fulfil its true potential.”

“Because of this, there were many groups after him, even before the fighting and battles had started.”

“In fact, the danger was so much that Alex had created quite the legendary set of equipment for himself to defend himself.”

“After all, we couldn’t protect him all the time, thus he didn’t wish to take any risk.”

“Still, multiple groups had gone after him for more reasons than one when all the chaos happened.”

“If you remember, Alex used fairy blood in his weapons.”

“This was incredibly useful when fighting against vampires.”

“Knowing this, Pure, the Dhampirs and the humans were heavily after him. There was one thing that they were unaware of though, and it’s the fact that fairy blood is also effective against dhampirs.”

“I learnt of this thanks to Richard Eno’s knowledge that had been left behind.”

“Knowing everyone was after him, I had figured out a way to put Alex into an eternal slumber, similar to how the vampires were put to sleep.”

“At first, he was against this and wanted to stay to fight against the enemies, but then Andrew… the other Blood fairy, was killed by the enemies.”

“After that, Alex was more inclined to listen to our ideas.”

Raising his left forearm, Logan tapped on it. His entire arm was encased in a strange metallic object, and in the next second, something popped out: it was a small vial with a red liquid inside.

Logan threw it out towards Quinn, who caught it, and used his inspect skill on the object.

“Alex went into a deep slumber, and the plan was to wake him up when needed and when we could protect him.”

“Now, we need him for both of those reasons. However, someone… has taken Alex.”

“Perhaps it’s the same people behind the disappearances of the original vampires, but I don’t know.”

“I think that this vial is better in your hands. You’re more likely to find him before I do, Quinn.”

“Use that vial and wake him up when you do. I am sure he will be happy to see you. He always wanted to thank you for changing his life.”

[Find the Blood Fairy Alex Way’s tomb and wake him up again.]

So far, he had no luck in Owen’s Quest, so he knew that this would be a hard one as well, but it would perhaps give him answers to the other vampires.

This could be a way to resolve things without him. If Quinn was to disappear from this world again, if they had Alex. they could perhaps have a way to fight the dhampirs because his ability was a massive weakness for the latter.

Still, the blood fairy weapons were a double-edged sword since they worked against the vampires as well.

“You asked about Leo and Erin. I am aware of who Erin is at the moment. I don’t know what happened or why she had attacked Samantha back then.”

“Based on her and her group’s actions, I don’t believe she is with the Red vampires or Laxmus.”

“It doesn’t make any sense, but I don’t know why she would have attacked Samantha at that time.”

“I’ll be honest, what the Dhampirs and what Erin is doing at the moment makes the least amount of sense to me.”

“But, unfortunately, I haven’t had a chance to talk to her. Still, something has been seen with the Dhampir leader and take this as you will.”

“It’s a large monstrous figure, sometimes appearing by her side from the shadows.”

“With fingers so large that they scratch the floor when its hands are by its side.” Although there was no footage, Quinn could guess what was being hinted at.

“He… decided to go to her after leaving me?… but why her?”

“As for Leo… I only came to know later that he had died fighting on the battlefield against the vampire attack and the Pure.”

“Perhaps they would know more about what happened to him but if I tried to ask them about it, I don’t think they would listen to me at all.”

The screen then changed, and to everyone’s surprise, the person they could see on screen was Quinn himself, but it wasn’t the current long-haired Quinn. It was the short-haired younger version of him.

The version that the others recognised more due to the statues and paintings of him looking this way, been able to gather information.

“You asked about Vincent. This person is someone whom I have been looking for myself but have not have been sightings of him, or you.”

“In multiple different places: there were stories and even a video of him. I believe Vincent is very much still alive to this day.”

“But he has been missing since we placed you in the tomb. Also, he hasn’t tried to make contact with any of us.”

“We can’t deny that there has to be a reason why he is hiding, but I am afraid, only he knows what that is. Maybe he’s waiting for your return to show himself?”

Finally, Layla appeared on the screen, but she looked a bit different from before.

Layla was covered in dark clothing and had huge dark bags under her eyes in this image. At the same time, there were scars on her face and over her body.

Finally, Quinn could see that underneath her name, it stated the leader of the Red vampires.

“Leader Black!” Hannah said, standing up. “Leader Black was a member of the Cursed faction?!”

Now Hannah was starting to understand why Quinn had asked her the question of the Red Vampire leaders.

“I don’t know what has happened to Layla, Quinn. All I know is that she used that black sword a lot in her fights.”

“She was in contact with the Cursed faction for a while, eventually deciding to leave not long after Sam’s disappearance.”

“The others thought that she had gone looking for him. Only later to find out that she was part of an organisation called the Red Vampires.”

Quinn couldn’t help but clench his fists when thinking about what to do. He wanted to speak to Layla and ask her a few questions.

Also, the Dhampirs were planning an attack acainst the Red Vampire. Quinn needed to decide what to do.

The image on the screen changed once more, and Sil replaced Layla.