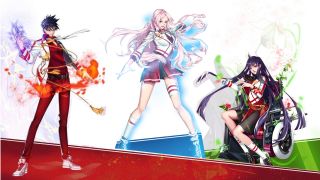 «My Crown Prince Consort Is a Firecracker (Web Novel) - Chapter 1871: This Darling is Fifteen Years Old

In the Divine Province, twenty years old really was a very young girl in view of the generally long lifespans.

Madam Jing wasn’t wrong in saying this, but…

If your daughter is still a child, then this darling is still only a baby!

“Pfft.” Qi Xuanxuan smothered her laughter with her hands.

Qiaoqiao’s stoic face really was so inexplicably hilarious and adorkable!

Was this madam brainless? She actually declared how her twenty-year-old daughter was immature in front of Qiaoqiao, and so she hoped that the other party would let her daughter off due to her “immaturity?”

Madam Jing’s jaw was indeed nearly dropping to the floor.

Even she could not guarantee that her own daughter would be able to achieve the level of the surging spiritual energy coming from that whip just now after triggering her divine meridians.

Yet this girl was actually only 15 years old?

Madam Jing took a deep breath as she looked at her daughter, who was still in Luo Yang’s grip. She then hastily turned to beg Mo Lian, “Your Highness the Crown Prince! Please be merciful! Our entire Jing Family will definitely remember Your Highness’s goodwill in the future.”

Even though Mo Lian had curled his lips, the frigid air about his smile made Madam Jing involuntarily give a shudder.

Luo Yang did not need Mo Lian to give another order. He scooped up the dagger that Qiao Mu had tossed to the ground with the tip of his foot and pressed it against Jing Minyao’s neck.

She still had yet to trigger her divine meridians, so she could be considered just a normal person, her existence like an ant. She was simply powerless to resist Luo Yang.

Of course, she was completely unaware that Luo Yang’s cultivation realm would not even make her a match even if she had triggered her divine meridians.

“So d*mn ugly.” The Gingko Immortal looked away with a snort.

On the other hand, the Little Despot observed the drama with interest.

He felt that he really was lucky to have followed the punk Mo out from that god-forsaken Punishment Tower. Otherwise, he wouldn’t be able to experience the wonders of the world.

Sure enough, it was too boring inside the Punishment Tower!

Mo Lian turned a blind eye to her and smilingly followed his wife’s slender little figure with his gaze.

“No, you cannot kill her! My daughter! My daughter is the Jing Family’s prodigy! Her divine energy was projected to reach level 10 during testing. This means that she will definitely become a level-10 grand divine cultivator within 20 years. If you dare kill her, the Jing Family will fight you people to the death!” Madam Jing’s horrified gaze was fixated on Jing Minyao’s neck.

“Shut up!” Jing Linyao creased her brows. “Do not casually speak for the Jing Family. Jing Minyao was at fault in the first place for this matter. She should be responsible for the consequences on her own! The Jing Family has no obligation to pay the price for her foolishness.”

Madam Jing glowered malevolently at Jing Linyao and pointed shakily at her while screeching, “You, it’s you who actively plotted to kill my Minmin!”

“It’s only her who is foolish,” Jing Linyao responded apathetically.