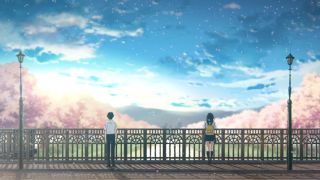 Chapter 1862 Hide Your Head and Show Your Tail

Watching the carcass in front of him drying up quickly and turning into dust, which then vanished in the end, Bai recalled the blood-colored snake at the tip of his finger.

The tip of his toes landed on the tip of the tower where the frost had melted. He looked into the distance and finally said coldly, “Get out, stop hiding. We’re the only ones here.”

Though his voice was cold, it spread out in all directions like an endless wave. It even scattered the black clouds that covered thousands of kilometers.

The tip of the black tower that was covered in the clouds finally revealed itself.

Bai looked down. Without the clouds covering it, his field of vision extended to almost half of the entire city.

As his voice echoed, the doors and windows of the tower suddenly exploded. Black tentacles rushed out of them frantically, stretching toward the tip of the tower where Bai was.

Bai merely lowered his head. A blood-colored giant python extended out from his back. The giant python divided itself into hundreds of snake heads at speed that was barely visible to the naked eye. They bit the sticky tentacles.

All of the tentacles were quickly broken and swallowed by the blood-colored giant python.

However, just as the first round of attack ended, the second round arrived fiercely.

The endless black, sticky tentacles rushed out of countless buildings crazily. Almost all of the buildings in the huge city had ambushers hiding inside. Each window, door and even hole became a source of the ambush.

At that moment, endless tentacles were sweeping toward the tip of the tower frantically from all directions.

Bai was like a target; a target that was being attacked from all directions.

Watching the innumerable tentacles coming over like an endless wave, like a butterfly getting out of its cocoon, giant blood-colored wings came out of Bai’s back maniacally.

Within a blink of an eye, 14 gigantic wings covered the entire sky.

There seemed to be an endless blood-colored ocean floating above the clouds.

The blood-colored ocean contained 14 almost invisible threads. They were connected to Bai’s back.

Bai did not even look at the endless tentacles rising from beneath his feet. Instead, he raised his head to look at the blood-colored sky.

He smirked lightly. He felt relaxed, as if he had let go of something. At that moment, the tens of tentacles, which were thinner than hair, beneath Bai’s feet spiraled up toward the tip of the tower. They blended in with the color of the tip of the tower. They moved completely silently, targeting his ankles. The second when the tentacles reached Bai’s feet, a blood-colored electric arc suddenly flickered in the blood-colored ocean in the sky.

The blood-colored electric arc was so fast that it almost surpassed the limit of space and time. It hit Bai’s soles directly.

The tens of tentacles turned into dust instantly from the attack.

A slithering black tentacle that was broken into half beneath the tip of the tower was exposed. Clearly, it could not hide from the attack.

After merely retreating for a second, the broken tentacle charged at Bai even more ferociously now.

Since the disguise was removed, it did not bother with it anymore.

However, a couple of lightning bolts were shot from the blood-colored sky just as it moved. They landed consecutively, crushing it into dust.

The tentacle was clearly just an appetizer.

Almost at the same time it turned into dust, the endless tentacles beneath Bai’s feet started coming at him from all directions like a tidal wave.

Nevertheless, he remained expressionless. He did not look panicked at all.

The reason being was that the moment the tentacles were about to touch his body, blood-colored lightning was brewing in the sky.

Countless blood-colored lightning bolts fell like a crazy storm. With Bai’s body as the center, the lightning continued spreading out into the distance continuously.

At the same time, the endless tentacle wave was destroyed instantly, as if it had been burned with fire.

The tentacles turned into dust instantly when they were hit by lightning. As the lightning flickered, the tidal wave of tentacles very soon quieted down.

Within two to three breaths of time, the seemingly endless tentacles were cleared out entirely. The entire city regained its peace. It was quiet again, just like the time when Bai had just arrived.

He stood on the tip of the tower and waited for a few seconds.

Seeing that the surroundings were still quiet, he chuckled. “Cthulhu, is this all you’ve got?”

“If you don’t have any more tricks up your sleeves, just surrender like a good boy. I’m too lazy to waste my strength.”

One must say that Bai had undoubtedly become much sharper with his words after spending a long time with Grimace.

The sound of a huge wave was heard after Bai spoke.

The source clearly originated from a distance from the big city.

He lifted his head to look into the distance. Very soon, he saw the water beneath the cliff under the suspension bridge rising continuously. Within the blink of an eye, the water flooded the cliff, reaching the gates of the city. Within the span of a single breath of time, the water had flooded most of the buildings in the city. Only the tip of the tower beneath Bai’s feet and a small number of the city’s rooftops were still above the water.

Watching the continuously rising water and the wave that was getting angrier, Bai knew what plan the opponent had.

Not only was teleportation prohibited in R’lyeh, flying was prohibited as well.

If all of the buildings were drowned in the flood, he would only be standing in water. Meanwhile, the opponent controlled the ocean. It would mean that regardless of whether he was on the surface of the water, or deep within it, Bai would be within the opponent’s territory completely.

“You’re pulling this trick on me?” Bai had a mocking expression on his face when he realized what his opponent was trying to do.

The next second, a huge wave suddenly arose. It was heading toward the tip of the tower where Bai was.

At that moment, Bai, who was prohibited from flying, stretched out colorless threads on his back. They entered the blood-colored clouds in the sky at high speed. Indeed, the prohibition on flying had restricted Bai’s flying ability, but it could not hinder the ability to float from all sorts of skills and divine abilities.

Therefore, the blood-colored clouds Bai released could float in the sky.

Meanwhile, the threads on the blood-colored clouds could pull his body up. Cthulhu, who thought that it had certainly defeated Bai, clearly did not think of that.

It finally could not help but roar furiously as it watched Bai’s body ascend at high speed.

The next second, whirlwinds quickly consolidated on the surface of the water. They turned into whips, lashing in the direction where Bai was.

Bai watched the approaching whirlwinds calmly. Meanwhile, the blood-colored clouds in the sky had turned into mist.

He was ascending quickly thanks to the colorless threads pulling him up. His body was soon covered by the clouds, and he vanished into the blood-colored clouds entirely.

The ocean beneath the clouds had flooded the entire city completely. Even the tip of the tower had been swallowed by the ocean.

The ocean waves were choppy, just like Cthulhu’s current mood.

Bai had merely disappeared for a moment, when a teasing voice suddenly came out of the blood-colored clouds in the sky. “Didn’t you like to hide your head and show your tail? I learned this from you.”