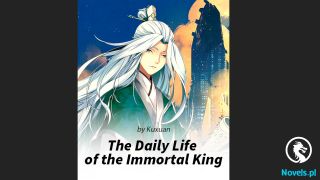 Zhuo Yun cleared his throat and said, “The medicine seller was very cunning and it was impossible to locate the guy. Since he’s from a secretive clan, perhaps he’s capable of concealing himself very well.”

He could only console himself in this way for failing to accomplish his task.

Huo Yao glanced at Zhuo Yun and could not resist correcting him. “It’s just a normal person. What can the person possibly do?”

Min Yu raised his brow and glanced at her upon hearing this.

“No matter what, we were unable to find the person,” Yang Yi sighed and answered.

Before long, Yang Yi added. “I think the person might know someone in the Apothecaries’ Association. We lost the medicine seller near the association.”

Huo Yao furrowed her brows. Why was it linked to the association again?

As she pondered, Min Yu asked. “Why did Chairman Wang want to see you today?”

Huo Yao paused for a few seconds before she threw her thoughts out of her mind. She shook her head and replied. “I went over to see him since he was unwell.”

Huo Yao turned her head and looked at him. “How did you know?”

Min Yu raised his brow and said, “I invited Chairman Wang to come over to examine you when you were unable to wake up. I noticed he seemed tense, so I kept an eye on him.”

Chronic poison was nearly undetectable and required long-term consumption to take effect, so this must have been going on for quite some time. She could smell a conspiracy brewing.

Sure enough, she was wise about not joining the association officially.

Deputy Chairman Qin had asked to see her earlier and made demands on her. She was certain this would not be the last she heard from him.

She could sense a headache coming on just thinking about it.

She should not have gotten greedy and become an honorary deputy chairman for the sake of free Chinese herbs.

Huo Yao leaned back into the seat expressionlessly.

Min Yu glanced at Huo Yao. He rubbed her palm as he held her hand. “Don’t worry.”

Huo Yao tilted her head sideways and smiled. “Why would I need to worry about anything with you around?”

Min Yu nodded with a straight face. “I’m glad you feel that way.”

When Zhuo Yun and Yang Yi saw Min Yu and Huo Yao’s behavior, they looked at each other awkwardly. They were appalled by their lovey-dovey interaction.

Min Yu raised his head to look at Yang Yi as he held Huo Yao’s hand. He said to Yang Yi solemnly, “Keep searching for Shangguan Yu. Even if you have to go through the city with a fine tooth comb, find him.”

“Okay.” Yang Yi nodded. He would have done the same even if his boss did not order it.

After all, he had embarrassed himself in front of Huo Yao because of Shangguan Yu.

Huo Yao quietly glanced at Min Yu. Even though she knew he was thinking about Shangguan Yu and not her, she could not help feeling uneasy.

Only Huo Yao and Min Yu remained in the living room.

Min Yu pondered as he glanced at her before he came closer. “Do you know Shangguan Yu?”