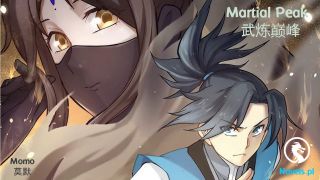 There was a huge copper bell floating above the Hidden Dragon Martial Sect. It spanned a length of over ten thousand meters, looking almost like a floating mountain.

Despite its huge size, its intricate design showed that great effort was put into its construction. On the surface of the bell were eighteen lifelike dragons coiling around it.

Even someone with Li Fengxian’s airs appeared tiny before the bell.

The bell also had quite a background to it too.

It was no other than the Hidden Dragon Martial Sect’s Dragon Bell.

Li Fengxian was currently standing beneath the bell, grabbing onto the rope to toll it. Yet, despite having stood there for more than an hour now, he was still unable to bring himself to do it.

As a Hidden Dragon Elder, he knew deep well what the bell represented. Unless something serious occurred, this bell would never be tolled.

The moment the bell rang, all of the elders and disciples would rush over and prepare for combat.

The sectmaster’s order to have him toll the Dragon Bell to gather everyone in order to announce Chu Feng’s punishment was more than indicative of the sectmaster’s attitude toward him.

Even if Chu Feng could survive the eleventh level of the Hidden Dragon Prison, his life in the sect from now onward would unlikely be smooth-sailing.

Li Fengxian really couldn’t understand why the sectmaster was treating Chu Feng in such a manner. Chu Feng was a talented individual, and the sect ought to do everything it could to protect him.

Such a thought arose in Li Fengxian’s mind.

Such rumors had been going around for a while now, so it was not just blind speculation on his part.

He didn’t think that it was right for the sectmaster to do that, but he wasn’t in a position to oppose the sectmaster. So, he closed his eyes, gritted his teeth, and began moving his arms to toll the bell.

Unlike normal bells, the Dragon Bell didn’t chime a deep reverberation. Instead, the eighteen dragons coiling around its surface rose into the sky and formed a massive formation.

All eighteen dragons released a furious howl at once that echoed throughout the Hidden Dragon Martial Sect, alerting everyone in the realm.

This was the Hidden Dragon Martial Sect’s Dragon Bell. The bell’s toll was no other than the dragon’s roar!

All of the disciples and elders who weren’t in closed-door training immediately rushed over from all directions to gather beneath the Dragon Bell. Despite the hurried assembly, they swiftly got into positions, forming a neat formation according to their affiliated halls.

Not everyone showed themselves though. Some of the experts noticed that the one tolling the bell was Li Fengxian and realized that it wasn’t something of particular importance, so they chose to just watch the situation from a distance away.

Instead of answering the question, Li Fengxian turned his sights toward the disciples of the North Tortoise Hall and ordered, “Chu Feng, step out.”

Chu Feng had no idea what was going on, but he still stood out and flew toward Li Fengxian.

However, before Chu Feng could get close, Li Fengxian suddenly tossed out a golden chain to bind him.

This abrupt event astonished not just the elders of the North Tortoise Hall but everyone else too.

By this point, Chu Feng’s reputation had already reached everyone’s ears. As someone who had consecutively broken Dugu Lingtian’s records and grasped control over the Blackwater Sixfinger Lake’s formation, the means he had displayed had indubitably surpassed that of anyone else since the sect’s establishment.

Everyone thought that Li Fengxian was calling him forth to compliment him, but he ended up chaining him up instead!

“Lord Hidden Dragon Elder, may I ask why are you shackling me?” Chu Feng asked with a slight frown.

He never thought that he would receive such treatment after proving himself worthy.

“What am I guilty of?” Chu Feng asked.

“As a disciple, you’ve committed insubordination by daring to attack a protector. That’s a major crime in our Hidden Dragon Martial Sect!” Li Fengxian said.

“A major crime? What about Protector Qi harming me despite shouldering the responsibility to ensure the disciples’ safety? If not for my luck, I might have already lost my life to him. I could have killed him after grasping control of the Blackwater Sixfinger Lake’s formation, but I chose to only bind him instead so as to await the arrival of the elders to judge the matter.

“Am I still guilty despite all of that?” Chu Feng asked.

“Chu Feng, your actions are understandable, but the Hidden Dragon Martial Sect has its own rules. You could have reported the matter upward to have the elders deal with Protector Qi, but you shouldn’t have made a move against him,” Li Fengxian replied.

“Very well. If you wish to put it in such a way, there’s nothing I can say. However, I would like to ask what’s the punishment that is being accorded to Protector Qi,” Chu Feng asked.

“Protector Qi has been stripped of his position and is currently being punished in the sectmaster’s prison,” Li Fengxian replied.

Chu Feng didn’t know the inside details regarding the sectmaster’s prison, so he thought that it was some kind of cruel place. Due to that, he was at least able to accept this outcome, and it alleviated his anger significantly.

“Insubordination is a severe crime. The sectmaster has sentenced you to three days of reflection on the eleventh level of the Hidden Dragon Prison,” Li Fengxian said.

“Hidden Dragon Prison? The eleventh level at that?”

Everyone was astounded to hear those words. That was practically a death sentence!