Support
Random Novel
My House Is a Magic Power Spot ~ 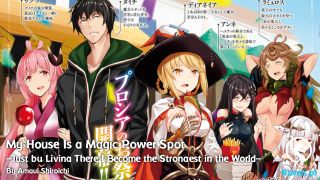 There must be a demon if something turned out of the ordinary. This sentence was particularly true in the game.

This was a natural reflex and thinking of players, regardless of whether it was local or foreign players. In fact, even a top expert like Wang Yu would feel the same.

After all, any unexpected and sudden situation like this would either end up with a hidden quest or the appearance of a BOSS. Either way, it wouldn’t turn out to be a good thing.

Naturally, this was what the Japanese players felt. When they saw a ship that they had never seen before, all of them immediately stopped what they were doing and came forward to the shore.

After the ship came to a halt, the Quan Zhen Sect players walked down unhurriedly.

When everyone saw that the people walking down from the ship were players like them, all of them couldn’t believe their eyes.

To think that this was this ship belonged to fellow players… Since when were players capable of producing ships like that? Which guild was this?

At the thought of this, everyone subconsciously looked towards the chest of Wang Yu and the rest.

As nerds, everything the Quan Zhen Sect’s players knew about the Japanese was from the media so they already felt that this bunch of people were wretched by nature.

Furthermore, the Quan Zhen Sect never liked being watched by others like animals in a cage. Now that all of the Japanese were staring at their chests, the Quan Zhen Sect’s players were naturally not feeling too comfortable. After all, there were two ladies in the squad.

A hot-tempered person like Ming Du even raised his staff and was about to slaughter some people.

Fortunately, Fearless reacted swiftly as he pulled Ming Du back, “Don’t start trouble so quickly! We can talk about everything else after we are done with official matters.”

Everyone came here with a quest to complete and it was true that Immortal Island was not in their national server. In a foreign land with no friends, everything was stacked against them. Causing trouble the moment they set foot on the first city was essentially causing trouble for themselves more than anything else.

After what Fearless said, Ming Du retracted his staff obediently.

Fearless walked up to ask, “May I ask if there is an NPC called Karl here?”

The fastest way for a player to level up was to complete quests and quests were generally given out by NPC in each main city.

With Harbor City’s seal, Karl was basically living with the taxes paid by the entire city so he was definitely not going to be some unknown resident NPC. As long as he wasn’t a commoner, the players here wouldn’t be unfamiliar with an NPC like him.

Who knew that after hearing Fearless’ question, all of them revealed shocked expressions and started crying out frantically.

These fellas were clearly astonished by the sudden appearance of foreign players.

“What’s going on…” Ming Du was as confused as everyone else.

“I’m not sure but I think they are surprised at our identity.” Fearless scratched his chin and said.

Wang Yu pulled open the settings tab as he looked through and said, “This game doesn’t have any simultaneous translation capabilities?”

Such technology had been made common over ten years ago and who would have thought that a high-technological game like > wouldn’t have this function.

Fearless replied, “In order to differentiate the different community, language independence was the most direct method. In many games of the past, languages of different factions would be different, let alone the fact that we are in different countries now.”

“Different language? Then how are we supposed to complete our quest?” Yang Nuo questioned.

Immortal Island had a total of six main cities and Saga City was merely one of the six. Since Karl was seen to have appeared at Immortal Island, what are the chances of them finding a single NPC on one of these cities? If they couldn’t even communicate with the locals here, wouldn’t they take a few months just to find one person?

“Boson, we have to depend on you now!”

Fearless turned back to look at Boson as he nodded and walked forward.

Boson had studied abroad in Japan before and this fella was actually proficient in eight languages.

Indeed, one could tell when an expert was here. After the exchange of a few sentences with the Japanese players, they seemed to have understood why the Quan Zhen Sect was here.

As a Chinese author, I am not well-versed in the Japanese language and even if I am, I doubt most of the readers will be… Therefore, all conversations after this will be in English.

Indeed, English is the universal language!

Even though Boson did not like talking normally, being proficient in eight languages meant that he had the necessary standards required to converse. After a few minutes, Boson was basically one with the locals.

Following which, Boson asked, “May I ask if there is an NPC named Karl in Saga City?”

As the players heard this name, they were about to say something but all of a sudden, a short Warrior who Ming Du tried to kill earlier stepped in to interrupt, “We have never heard of him!”

After saying that, that Warrior waved his hands towards the other players surrounding them, “Everyone, get lost and stop crowding here! Even if you guys have paid, I can still stop you from entering this area!”

Everyone seemed to be terrified of this short Warrior and after his round of reprimands, all of them left obediently.

Even though the Quan Zhen Sect did not understand the conversation between the Japanese and Boson, they were not idiots. Everyone could tell the intention behind the actions of this short Warrior.

In terms of causing trouble, Ming Du was always the most extreme one. At the sight of this, he jumped up and said, “Is this fella acting arrogant? Do you need me to slaughter him?”

After Ming Du said that, the short Warrior walked towards Boson and lifted his head, “Are you Chinese?”

Even though this fella was short, his tone was high and mighty.

“Tsk!” the short Warrior grunted, “This is Immortal Island and we do not welcome you! Please head back!”

Boson might be quiet but it didn’t mean that he had a good temper. Boson was already feeling irritated by how this short Warrior disrupted his conversation with the others. Now that he tried to chase him away, Boson was naturally not going to endure that.

In their massive server, nobody dared to talk to the Quan Zhen Sect in this manner and a mere local bully of this Immortal Island actually acted this arrogantly in front of them…

Boson smiled as he gradually took out his Sword of God while reaching out his other hand onto the short Warrior’s neck. “What did you say? I didn’t hear too clearly!”

After playing the game together for such a long time, everyone worked well with one another. The moment they saw Boson’s stance, everyone took out their weapons too.