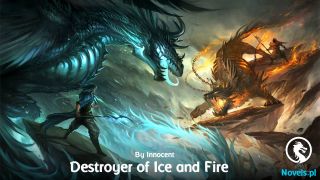 The water in the Whitesky Star River billowed, as if it was trembling in fear.

The ones who were the most frightened at the moment, however, was no other than the old man and the young man.

The old man was an extraordinarily powerful expert, renowned even within the mysterious Saint Valley. It would be no exaggeration to call him a powerhouse of the world.

Yet, before the tremendous strength that had sealed even the Whitesky Star River, he found himself unable to do a thing at all.

This made the old man deeply cognizant of the fact that he had betted wrongly.

The sudden emergence of this power only went to show that there was someone incredibly powerful protecting Chu Feng from the shadows, and the other party was far beyond his means to deal with.

“You and your damned ideas! You’re really going to bring about my death one of these days!”

The old man glared at his disciple in such great fury that it almost felt as if he would strangle the latter to death. If not for his disciple’s suggestion, he wouldn’t have coveted Chu Feng’s strength and chased after him.

However, it was already all too late now.

Chu Feng was indeed someone with an incredible background, protected by the strongest of experts in the world. The sin of daring to eye such a person was more than enough to warrant death.

The young man’s conceit vanished without a trace. He was so nervous that he found himself unable to utter a word at all. His fear was only greater than that of his master’s.

The young man kneeled to the ground and began kowtowing toward the sky. He didn’t dare to dare to pull his weight and act domineering anymore. All that was inside of him at this moment was the fervent desire to clutch onto his life and survive this crisis.

“Milord, we bear no ill will toward the young man. We were just joking around! If we really intended to hurt him, we would have never allowed him to leave.”

The young man spoke with such an earnest and subservient attitude that one would find it hard to doubt his words.

However, the old man only shook his head at his disciple’s action.

It was all futile. How could someone as powerful as the other party possibly fall for such lowly lies?

The old man had already given in to despair. He was resigned that the two of them would lose their lives here.

“Had I known in advance, I would have never chased that fellow here!” The old man sighed to himself.

“Who were you chasing?”

A deep voice suddenly sounded from above the sky. It was resounding and lofty, carrying a divine aura with it. It sounded almost as if a deity was addressing them from heaven.

“He’s an elusive figure. I’m also not too sure who he is. I only know that he wears a red robe and a red straw hat. I haven’t had a chance to see his face before, and I’m not too sure how powerful he is.

The old man had indeed lied to Chu Feng. The two of them didn’t just drop by this area by coincidence. They knew who the culprit who massacred the race from the Ancient Era was, and they were here to find him.

“Another word of advice, that young man, Chu Feng, is not a person whom any of you can afford to touch. If you dare to harm him, even if I’m willing to let you go, that man will not turn a blind eye to it. Not even the Saint Valley will be spared once that man is enraged, so I suggest you think twice before trying anything.”

The deep voice pierced right into the hearts of the old man and young man, jolting their souls in astonishment.

Everything suddenly fell silent after those words were spoken, and the energy that trapped the old man and the young man gradually faded.

This was a sign that the man from before had left the area.

The old man and the young man traded glances with one another, unable to believe what they had just gone through.

They actually managed to escape the ordeal just like that?

All it would take for the other party to reap their lives was a mere thought, but they were still let off the hook.

The world of cultivators was truly a mysterious place where there was always a higher peak ahead of one no matter how one tried to scale the mountain.

He couldn’t even say for certain whether the strongest Lord Saint Monarch of their Saint Valley would be a match for the other party.

And what that alarmed him further was the ‘that man’ whom the other party spoke of earlier. To put it in other words, there was an even more terrifying expert that could possibly wipe their Saint Valley away from the face of the world.

“Master, I know my mistakes!”

A person suddenly sobbed beside the old man. It was his disciple.

The arrogant young man had begun to wail as he kneeled down before his master and kowtowed deeply for forgiveness.

“Stop crying. What can crying do?” the old man said as he pulled the young man back up to his feet.

Even though he was very angry earlier on, there was no denying that he doted on his disciple a lot.

“Do you finally see that there’s a world far greater than what you can see at the moment?” the old man asked the young man.

“I know it now. I’ll never dare to look down on others easily anymore,” the young man said while sniffing in his snot.

He was really terrified earlier on, knowing just how close he had been away from death.

“Sigh! I’m also being taught a lesson over here too. It hasn’t been long since our Saint Valley re-emerged in the world, and I thought that we’re already an invincible entity around. Yet, barely after we appeared once more, we encountered that powerful red-robed man who specifically hunted down the races from the Ancient Era.

“We thought that the red-robed man was the only one who could threaten the position of our Saint Valley, so we were determined to get rid of him so as to solidify our standing. We chased him all the way here, only to end up meeting that expert from earlier on…

“Looking at it now, it seemed like we were far too narrow-minded. Who could have thought that the current era of cultivators would be far more terrifying than we thought… I really need to head back and have a good talk with our Valley Master about this matter.”

With a flick of his wrist, he took out a unique-looking compass that emanated a golden glow. It was obvious that it was no ordinary treasure with just a single look.

The needle on the compass was currently pointed in a certain direction.

However, barely after taking a glance at the compass, the old man suddenly changed his mind and kept his compass back in.

“Master, are we not chasing him anymore?” the young man asked.

The old man rose to the sky as he spoke.

The young man shot a long look in the direction where Chu Feng had departed toward before he quickly followed his master. He was trying to maintain a calm look on his face, but the fear in his eyes ran so deep that it couldn’t be concealed at all.

The old man and the young man thought that they were finally safe, but little did they know that the person who had struck such deep fear into their hearts was still lingering the area, having yet to take his leave.

Deep in the sky, a pair of eyes were also looking in the direction where Chu Feng had left to.

“Boy, this is the final time I’m helping you. You have to walk the rest of the journey yourself, or else… you would be going against your father’s wishes.”