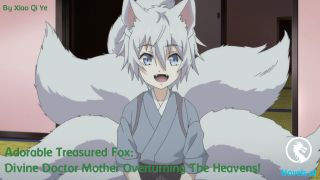 A roar echoed across the heavens.

Without the golden hands holding it back, the Black Water Dragon roared excitedly and made its way to the source of that previous roar.

Over there, the eerie man in black armour had a sombre face, as a devious aura rose from him.

The intensity of that aura was enough to make any ordinary cultivator shiver in fear.

“You finally showed up?” Emperor Bai was not surprised by the entrance of another person.

He knew from Jian Wushuang that there was an Ancient Era expert behind the Black Water Dragon. Without a doubt, he was the one.

“Hiss, hiss~~” The Black Water Dragon revealed an aggrieved look in front of the eerie man.

The eerie man looked at the Black Water Dragon and saw the scars and broken fang. He was devastated.

“How dare you beat up Scaly like this! You must have a death wish!” The eerie man glared at Emperor Bai with murderous intent.

“Ridiculous!” Emperor Bai on the other hand sneered. The golden Divine Power Sea rose once again, now heading straight for the eerie man.

Behind Emperor Bai, a large and magnificent golden shadow appeared out of thin air.

The golden shadow was 99,000 feet high, and a majestic aura surrounded it.

Emperor Bai made his move.

In a blink of an eye, the eerie man and Emperor Bai collided in the middle of Divine Blade City.

Both of them did not use any divine weapons, only their fists.

Both of their fists, each containing earth-shattering destructive powers, collided.

Boundless Divine Power was destroying everything around it.

The waves of that terrifying shock rolled over every corner of the city.

As the ripples swept over, the Void started to collapse.

Beneath their feet, the enormous Divine Blade City, countless palaces and taverns were crushed into rubble, then into powder.

One collision was all it took to make the entire city disappear.

At the centre of the terrifying power.

The eerie man with murderous intent lifted his head and looked at Emperor Bai in surprise.

It was no wonder he was surprised.

The opponent’s fist was amazingly strong.

Evidently stronger than him.

The eerie man was blasted backwards.

He retreated from the centre of Divine Blade City, all the way to the outskirts of it.

After he had recomposed himself, he could not help but look at his right hand. His hand was now numb, tingling pain coming from the inside of his bones.

“So powerful, close to a Chaotic Divine Demon.” The eerie man’s gaze turned solemn. He fell quiet for a while, before asking, “If I’m not wrong, you are that Emperor Bai right?”

To him, at that era, under the huge restrictions placed on the earth, only Emperor Bai could demonstrate such power.

As Emperor Bai admitted to his identity, the eerie man’s face turned sour.

He was an Ancient Era expert and had been a powerful one back during the Ancient Era.

But under the heavy restrictions placed on this earth, he could not demonstrate much at all, to the extent where he had some reservations against going against the Chaotic Realm Emperor Bai.

The collision proved that Emperor Bai was invincible in the current era.

Even he had to concede.

After thinking of that, he sighed and said coldly, “I concede for today. Scaly, let’s go!”

The eerie man had no intention of continuing his fight with Emperor Bai.

He was angered by what Emperor Bai had done to his Black Water Dragon, but he had no choice but to escape.

However, Emperor Bai would never let him get what he wanted.

“You want to go? How could it be that easy?”

That completely enraged the eerie man.

“Emperor Bai, I no longer wish to get back at you for hurting my mount. You really think I’m afraid of you?” the eerie man was furious.

If he could demonstrate his full fighting power like back in the Ancient Era, he would not even take Emperor Bai seriously. Even true Chaotic Divine Demons were nothing in his eyes.

He had already made concessions against ants like him, but he was not willing to let him off?

A thick golden light shimmered on his enormous body.

Things did not end with the golden armour. A boundless aura rolled from the golden shadow behind Emperor Bai, turning into golden emperor.

The golden emperor overlooked everything coldly.

“This is…?” the eerie man’s face changed suddenly and had his eyes dead set on the enormous golden emperor. He knew what secret skill Emperor Bai was using.