Support
Random Novel
The Story of One Continent 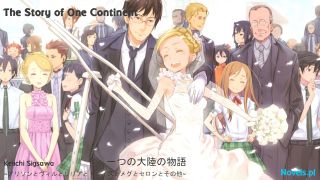 A large amount of majestic divine power instantly rose up, and in the blink of an eye, it formed a huge sea of divine power.

Endless divine power churned like huge waves, slamming toward the heart shaman one after another.

The heart shaman snorted coldly, but a large amount of black fog immediately erupted from his body. This fog was incomparably black, and it also emitted a foul stench.

In the blink of an eye, the two experts had already engaged in a fierce battle.

There was no fierce collision of power or even a violent roar. There was only a sizzling sound caused by the continuous erosion and compression of energy.

Jian Wushuang, Long Lu, and the others had already retreated to the side.

No one dared to get involved in the fierce battle between Dao Dragon and the mind witch.

“Lord Dao Dragon is obviously much stronger than the heart witch. With his help, the heart witch has no chance to fight at all. What’s next…” Jian Wushuang’s eyes turned slightly cold as he stared at the five experts of the Purple Cloud Pavilion, with a flip of his palm, the Blood Mountain Sword appeared in his hand.

Long Lu and the other five saw Jian Wushuang take out his long sword, and they also sensed the rising battle intent from Jian Wushuang.

“What is this kid planning to do?”

“He is only a rank three True Saint. Does he want to fight with us?”

“Humph, who cares? Since he wants to die, we will help him. Guys, let me attack first!”

Buzz, buzz, buzz. A large amount of dark airflow soared into the sky.

The long black stick was like a huge mountain, crashing toward Jian Wushuang with a rumble.

Seeing this, Jian Wushuang smiled indifferently. “Ninety years ago, I fought with Long Lu head-on. At that time, I used my full strength to use blood Asura and forced him to retreat. But now…”

A trace of disdain flashed in Jian Wushuang’s eyes.

Just as the pitch-black longstaff was about to hit his head, Jian Wushuang suddenly attacked.

This evil aura was enough to make ordinary cultivators tremble in fear.

Jian Wushuang held the sword with one hand. The Blood Mountain Sword had already turned into a bolt of blood-red lightning and struck the pitch-black longstaff in an instant.

It was the peerless sword technique, Xi Xiang!

The sword light was brutal and invincible!

The sound of metal colliding rang out, and Long Lu’s body shook violently.

Long Lu raised his head in shock. The next moment, his body shot backward like a cannonball. While retreating, he kept rolling, and it took him a long time to regain his balance, there was also a trace of blood at the corner of his mouth.

“A rank four, rank four True Saint, and at the peak of rank four?” Long Lu stared at Jian Wushuang in disbelief.

Ninety years ago, when he fought with Jian Wushuang, Jian Wushuang’s divine power aura was obviously at the level of an ordinary rank three True Saint. But now, he had reached the peak of the rank four True Saint. His realm…how could he have improved so much all of a sudden?

Moreover, he had reached the limit of a rank four True Saint. How could Jian Wushuang’s attack be so powerful?

After all, he was a genuine rank six True Saint. At that moment, he had used all of his strength and used the strongest move he had created. But in the end, he was directly confronted by Jian Wushuang, he had been sent flying by a sword and his divine body had been seriously injured?

Not only Long Lu but also the four rank six Peak True Saints from the Purple Cloud Pavilion and all the members of the Heaven-cleaving Alliance who had come out of the lair to watch the show were shocked by this scene.

“A rank four True Saint had sent a rank six True Saint flying with a sword?”

“Not only that, but the divine power of the rank six True Saint was obviously weakened. Apparently, his divine body was severely injured in the collision and he used his divine power to repair it.”

“A single strike severely injured a rank six True Saint. How is this possible?”

Everyone was in disbelief.

Only Jian Wushuang was not surprised by the result.

“The divine power of a rank six ultimate True Saint, the first form of the Xi Xiang, has been greatly improved over the past 90 years by comprehending the ‘Gold-splitting secret manual’. Now, it has also reached the level of a rank six absolute art. In terms of power, it is no weaker than the staff skill of Long Lu!”

“In a situation where the absolute art is equal, the divine power of an ultimate True Saint of the sixth rank is naturally stronger than that of an ordinary sixth rank True Saint. Moreover, my comprehension of sword principle is also very high. The immeasurable sword tree in my body has reached 16,500 feet. This has already surpassed many top True Saints, so the power of my swordsmanship is naturally stronger!”

“All in all, of course he will be crushed by me!”

Jian Wushuang felt that it was reasonable, so he did not care about Long Lu.

“Long Lu, you are not qualified to kill me. It’s better for the four people behind you to attack.” Jian Wushuang’s cold voice echoed in the world.

Long Lu’s face was extremely ugly, but there was nothing he could do. He could only look at the four people behind him.

The four people looked at each other, and then a short elder in dark cyan armor took a step forward.

“Brat, let this old man see how much you weigh!”

He could see that this short elder was much stronger than Long Lu, and he was definitely very powerful among the true saints at the peak of rank six.

And that was indeed the case.

Jian wushuang had seriously injured Long Lu with one sword strike, which shocked many people, including the four True Saints at the peak of rank six.

After all, these four rank six Peak True Saints came from the Purple Cloud Pavilion. In front of so many people, they had to care about their dignity and identity. It was not good for them to attack a rank four True Saint at the same time, therefore, the short elder was the strongest among the four.

The short elder’s body burst with evil energy. He dashed out like a purple lightning bolt.