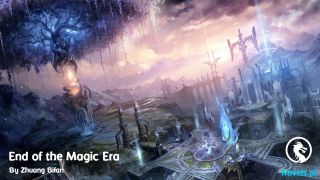 I lay flat on the summit of the Sagara mountain, absentmindedly peering at the mountain trail. There was no other mountain climber within sight, so I didn’t need to spend the extra effort to make it happen. Besides, this is just a stubby, wintry mountain with the maximum elevation of several dozen meters that doesn’t even serve as a sightseeing spot. All the impression it left was nothing but a place that even the locals won’t step into and instead it looks like a place where businesses would illegally dump their waste in, so unless someone had to deal with some serious circumstances, no one would be here.

Additionally, it’s currently 9 PM on a weekday. No students nor working adults would be in their right mind to spend the time climbing up a mountain at this time of the evening.

Still, there was a sliver of chance that a retired elderly or a camping enthusiast will be here, so I made sure to be ready to sneak up behind them and put them to sleep with a spell, but fortunately for me, there was not even a hint of anyone coming up here, perhaps thanks to the record-breaking cold wave sweeping about right now.

Like I said, only someone with a grave circumstance would even attempt to come up here. Yes, people like me or Saeki Yuuta.

Along with a crunchy sound of his feet stepping on gravel, the figure of a slender young boy came running towards me. His face showed an expression of pure anger, desperately gasping for breath as his legs carries him forward.

Currently, I’m hiding myself with Concealment magic, so Yuuta’s eyes reflect nothing.

Looking for me, who was right next to him, the boy yelled.

I’m quite sure he’s not a bad person, so since I don’t want to bring any more harm to anyone more than necessary, I decided to quickly put him to sleep. I stood up and cast my spell from behind him.

“I heard you’re supposed to be quite weak, but aren’t you giving your all right now.” I said, catching the boy as he fell asleep.

This feels truly disappointing. I can be sure that this won’t be the end of it, so dropping my guard right now would be suicide. After all, I can be certain that Kana will be tailing her brother without a doubt. She would conceal herself and follow him without the boy’s knowledge.

Keisuke C had been monitoring the Saeki household since early in the morning through the telescope I bought, monitoring it from the distance where even Kana’s Life Detection won’t be able to capture. Since he’s using a telescope, he could even see through anyone even if they were to conceal themselves with a spell of their own, so he could give me a detailed report of who went in and out of the house through my phone.

Kana is definitely here, so the question remaining is; where is she?

I took a combat posture and surveyed my surroundings, hinting to anyone that their surprise attacks won’t work on me.

Before long, three streaks of Sword of Lights were unleashed.

Seems like the level of her concealment skill is not as high as I expected since the activation of her sword skills weren’t completely concealed.

With a beaming sound, the wavering Sword of Light swayed randomly, swinging to the left and right from time to time. Perhaps she was wondering why her surprise attacks didn’t connect, or what is it that she should do at the moment.

“Dispel.” Facing the Sword of light, I cast a purification spell. As the spell wraps around its target in a blinding light, the veil of invisibility concealing Kana’s figure disappeared, revealing the three identical figures of Kana, all blazing in rage.

One of three Kanas made a huge swing with her sword which I easily dodged by lightly moving backwards. After throwing a Hail Mary of an attack, her posture greatly crumbled. Witnessing a great chink in her armor, I couldn’t allow this chance to pass me by.

I shot a Flash Bullet spell, and the Kana that was faltering forward evaporated.

The second Kana immediately jumped to where I am, I countered by unleashing a straight punch towards her face.

With a short grunt accompanying the sound of water splattering, everything above that Kana’s neck disappeared. The resistance I felt was like that of a water balloon, and the now headless body greatly convulses as it falls down. Since it would trouble me if she were to resurrect, I decided to immolate her body with an advanced fire spell.

“What’s next? You’re down to the last person.”

The last Kana in the middle held her sword. Her gaze alternates between me and her brother, perhaps truly lost whether she should retreat or focus on extracting her brother.

“You should clearly see the difference between our power right now. Stand down.”

I’m not an opponent she can fight head-on, or at least that’s the message she should already understand.

Kana stored her sword and raised her hand, surrendering.

She’s being too obedient, which is truly unnatural for someone of her personality. Besides, I can still see it in her eyes that she’s still itching to fight, which also showed me that she’s the type of person that’s bad at lying. Perhaps I should intimidate her even more so I could corner her further.

I said to her, “You should’ve done this from way earlier” as I casually walked up to her. I put a hand on her shoulder and showed my intent to talk this one out.

“You made six copies of yourself and left the other three at home, right?”

“Chill out a bit. It won’t be difficult to resolve things peacefully, so that both you and Yuuta can go home with your lives…”

It was at that time when Kana abruptly thrusts her sword of light to my nether region. What an awful taste of surprise attack.

I had a defense value of over thirty thousand, so her attacks wouldn’t even tickle me. In fact, no blade could even pierce my eyeballs, much less my privates.

“…I can’t believe you. Who in their right mind would even extend their training down there?”

“This didn’t happen because I wanted it to. If you want to hurt me down there, do it mentally.”

Inevitably, I lopped off both of Kana’s arms, which disabled her use of her Sacred Sword skill. She might have casted Regeneration spell on herself before coming here, but it should’ve been blasted off by Dispel along with her Concealment, so there’s not a risk of her arms growing back.

Of course, she still could cast another instance of it, which is right about now.

But I wasn’t so foolish as to let that happen. Before she finished her chant, I thrust a finger into her mouth, effectively disabling her from chanting anything.

“Don’t even bother trying. Your jaw doesn’t have enough strength to cut my finger off. It feels like a pair of sponge pressing on my finger at this point.”

“There’s too big of a difference between our base stats. Give it up, you’ve run out of cards up your sleeves.”

Her remaining feet desperately stomp on mine, which was nothing but a futile resistance from her part.

“Let’s talk. I’m not one to enjoy tormenting a girl.”

Her saliva dripping out of her mouth, the girl kept attempting to struggle free as she continued biting on my finger.

“You can detect life forms, right? Use that to find the other Kana. If you do that, I’ll let you live and dispose your other copies.

“After everything is over, I’ll let you live your life as a normal human. How about it? Throw away your sense of elitism and stop killing people you don’t like. Take it as a token of friendship from a fellow summoned hero” I said, persuading.

Did it get through?

Her answer was apparently a kick toward my nether region.

In the end, I reluctantly cast Terror at her, a crafty debuff that amplifies her sense of fear and pain, though I did so hoping that I don’t accidentally break her spirit.

“Let me talk about the past for a bit.”

Talking next to the girl’s ear, I told her about my adventuring days in that other world.

“I completely eradicated the entire goblin species in that world. Do you know how?”

I told her about how I took the goblin children alive and crucified them in front of their nests and slayed their enraged parents one by one. How I tortured them so gruesomely that it left a bad taste in my mouth even talking about it. Casually, I talked about such past for the girl to hear depicting the most specifics of details with every word right next to her ear. My goblin subjugation was a tale of genocide, for thinking about how they are the race that took Elza’s life removed any restraint from my actions.

“If you still choose to be as hard-headed as you are, then you will be a goblin to me, and I will wipe the floor with you as I did with them. I trust that you do not want to live the remainder of your life enduring unimaginable torture, yes? …oh, come on, don’t start wetting your pants now.”

Her body fluids start to ceaselessly flow out of her eyes, nose and crotch.

I lightly patted the girl, completely changed from who she was mere seconds ago, on the head. “Take it easy, I won’t go that far for a human, and you are a human, right Kana? A human wouldn’t think of killing the people that doesn’t make her selection, right? I wouldn’t have any restraint if you’re a ruthless demon, but you’re not a demon, right?”

Kana shook her head, to which I replied by saying “Good, I don’t hate obedient children.”

The will to fight she had in her eyes just seconds ago had completely disappeared, and the rage in her eyes was replaced by pure terror and hollowness.

“That leaves me with the other three.”

As I whispered thus, the phone in my pocket rang. Quickly pulling it out, I looked at the screen.

I threw a quick reply saying [ty] and descended the mountain carrying the Saeki siblings as I basked in the convenience and the inconvenience of the information society.