Support
Random Novel
The beginning after the end 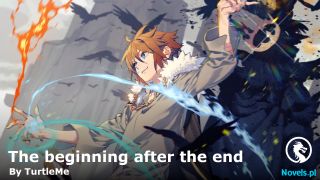 Resting in the living room, I mindlessly turn on the television, and what appeared first was the figure of Saeki Kana being interviewed. The girl that I should have murdered in the morning is now surrounded by the press, quietly taking questions from reporters all around her. It was not a recorded footage, it’s live, which means that right now, Kana is still alive.

Feeling cold sweat running down my back, I continue to gaze at the screen, seeing Kana’s eyes glaring with fury.

“I have a power to clone people,” she said, flanked by one…two…six girls that looks like a carbon copy of her. Shocked to my core, I increased the volume. “If there are any humans that want me to clone them, come forward. I can do it for you quickly.”

To my side, Angelica and Ayako-chan were staring blankly at the screen. I mean, I was. Why were there multiple Kanas? Judging by the quick scan I did; she shouldn’t have any self-cloning skills. Which means…she cast a Regeneration on herself and cut cleaved herself clean exactly in two.

I know that the slashing attack using the Sword of Light can be affixed mid-air, and she probably did that and throw herself into it. It was probably a crazy stunt to do, but it’s still possible for her to still correctly aim at the precise location to cut herself exactly in half with the Holy Sword skill. She can bring up a reticle that could even show the prediction of where the slash would go as well as showing the exact size of whatever material cut is going to be after the cut. All she had to do after that is to move according to that prediction.

Using the Sacred Sword in that way is unprecedented, but Kana had pulled it off. Several times at that.

“…I guess that makes sense, no matter how high your agility is, it would be difficult for a lone criminal to go around cutting people in one night.”

There are several Kanas, which simplifies things. There are six people on the screen, but she might have more clones around. Even if she’s not a big deal for me to take care of, if she keeps increasing her numbers, it’s going to be a huge pain in the ass. It would be better for me to take care of her sooner than later. The longer I ignore her, the more number and therefore the more strength in number they will have.

I groaned at Kana’s provocative smirk.

“Is this the person that cloned me?” asked Ayako-chan, her voice trembling.

“Right, I never really taught you how she cloned you, didn’t I?”

I told Ayako-chan about the general notion of summoned heroes before moving on to explaining about Regeneration and the sword skill that made the cloning possible. She was listening to my explanation somewhat absentmindedly, but she’s surely listening. I wonder if she gets it though.

“I know it might be hard to accept it, but…Ayako-chan?”

Ayako-chan cried as she repeated the words “I’m glad”. The problem of whether she’s the real one or the fake one must have been burdening her conscience and her sense of the meaning of her existence. I think it’s the natural response for a girl…no, for a person.

In retrospect, Kana’s heart is no longer human. She didn’t think twice of cloning herself, and she said it herself that she is encroaching the domain of God. An arrogant, whimsical, mythical God.

“How should I deal with her…” I whispered, rubbing my chin. I wasn’t really expecting an answer, it was just a conversation between me and I, yet Angelica responded.

“Are you going to fight that person daddy?”

“Yeah, she’s acting based on a dangerous ideology. Looks like she lived a complex life in the other world where she can clone the people she liked and kill the rest.”

“Sigh…the hero turned to be the demon lord, huh. A common story if I say so myself.”

Angelica furrowed her brows, bringing her hand to the crying Ayako-chan’s back.

“Her status is quite something, but she’s not someone I can’t win against. Her entire strength wouldn’t be able to equal to ten percent of mine.”

“That’s the point. The most annoying of everything is that she’s showing it to the public.”

“Why?” Angelica asked completely clueless, to which I gave her a summary of my explanation.

“That Kana knows that I’m after her, so she prepared some countermeasures to protect herself…pretty sure there are some other Kana in that thicket we went to, so that’s why she’s acting this quickly.”

“Umm…how does appearing on TV connected to her countermeasure?”

“A famous person will be surrounded by the mass media around the clock. It wouldn’t even be weird if they managed to set up cameras surveilling her house. I think she’s deliberately using the media for protection.”

She’s thought it through, I’ll admit.

“Cameras can still see through Concealment, so it would be difficult for me to assassinate her. If I have to kill her, my hands are tied. I can’t just come to her now knowing that if I do it will remain in records. It’s an effective method to deter my attacks.”

“How about taking her down from long range?”

“That’ll be difficult. It’s hard for me to say this, but my firepower is so huge that I’m really bad at pinpoint sniping an individual, and I don’t want to put the reporters or curious onlookers in the line of fire. Besides, the maximum range of the Sword of Light is merely several meters anyways.

“So she’s using human shields, huh. Seems like being too strong is becoming a handicap” said Angelica, sighing.

“Right…of course, if I decide to ignore the public eyes and take the offensive, it’s an entirely different story. I could just walk up to her and decimate every single copies of Saeki Kana, but I’m sure she predicted that I wouldn’t do that. She knows that I’m pretending to be a magician as to not disturb the society. She knows that I’m the type that would rather live a quiet life.”

“Hmm…seems like she’s holding her fort against a siege, raising her own popularity and establishing a castle of cameras to defend herself.”

“True that,” I said, laughing.

“…hm? But aren’t you supposed to be good at sieging a fortress, daddy?”

It’s true that I have over 60 spells that are useful in storming a fortress. I’ve lost count of the number of times I decimated entire goblin nests to the point of their near extinction.

“Well what do you know, Kana is leaping straight into the subject I’m best at.”

If I don’t have to choose how to go about this, it’s easy for me to bring her out of her hiding hole.

I cracked my neck as I peered at Ayako-chan, wiping her tears on the corner of my eyes.

“She made Ayako-chan cry, so I won’t hesitate to blast her with all I have.”

“That’s my daddy!” Angelica exclaimed, her hands joined together and making a dry-sounding applause.