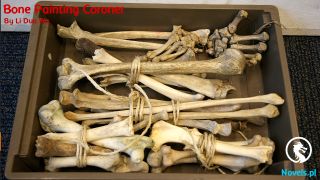 His eyes were filled with shock and disbelief as he looked at Qiao Ruhai.

In any case, at this moment, his expression was complex.

His expression changed several times in a short period of time.

Qiao Ruhai didn’t expect such a reaction from him.

He was a little shocked.

He didn’t know if what he said was good or bad.

He looked into Gong Zeli’s eyes and asked nervously, “Young Master Gong, did I say something wrong?”

“You said that you saw Qiao Mianmian drenched at the birthday party?”

“Did she tell you why she was wet?”

“T-This… she didn’t say,” Qiao Ruhai said cautiously. “I asked her about it, but she didn’t say anything. She said that it was because the lights in the backyard were a little dim and she wasn’t familiar with the road, so she accidentally fell into the water.”

“She’d been to the backyard?” Gong Zeli felt his heart rate increase to 150. His fingers were trembling more and more, and his chest was also shaking.

The answer he wanted to know seemed to be getting closer and closer to him.

“So, she got wet after going to the backyard? Do you remember the time?”

It was good enough that he could remember what happened 10 years ago.

He couldn’t remember the time exactly.

But to Gong Zeli, what he knew now was enough for him to investigate the truth.

Although he wasn’t 100% sure about some things.

But the evidence they had now was close to 90% true.

If… the truth was as he guessed, then…

Gong Zeli clenched his fists as anger rose in his chest.

Qiao Ruhai saw the change in his expression and felt even more uneasy, thinking that he’d said something wrong.

Gong Zeli took a deep breath and threw the teacup in his hand away. “Old Master Qiao, thank you for coming today and settling a very important matter for me. If you have any requests, you can ask me. Take it as my gratitude.”

God knew how hard it was to get Gong Zeli to say something like that.

He didn’t even dare to think about what it meant to be helped by the Young Master of the Gong family.

He saw that Gong Zeli didn’t look too good and was worried sick. He thought that he had said something wrong and angered him.

He thought he was going to be in big trouble.

But who would have thought that the next moment, he would be so surprised?

But even though it wasn’t easy to get Gong Zeli’s help, Qiao Ruhai didn’t dare to ask for it.

The other party was being polite.

If he wasn’t serious, then his EQ was too low.

“Young Master Gong, you’re too kind. I didn’t do anything. Moreover, it’s my honor to be able to speak to you. I don’t dare to ask for anything more.”

Gong Zeli smiled. “It’s rare for me to take the initiative to help someone, and I’ve been rejected? Old Master Qiao, you’ve to think it through. There won’t be another opportunity if you miss it. Are you sure you don’t need anything?”