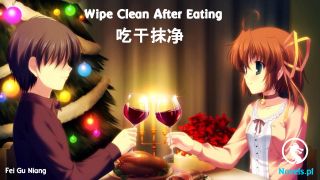 «I Only Wanted A Class In The Apocalypse (Web Novel) - Chapter 915 A Demoness!

The two girls seemed to feel something amiss. Yet with a silent warning gaze of mine, they kept their silence and slowly nodded.

“Come with me,” I said to my Hilary while moving towards the stair, “let’s talk down there.”

She followed me towards one of the rooms there. Once we entered, I turned and asked:

And just as she said it, she suddenly closed the door with her foot, stripped off her entire armour and clothes, before jumping over me.

It happened all of sudden, making me fall over the bed with her body over mine. Her lips kept devouring mine before I got turned on.

And then I held her soft and slim body and touched her soft skin with my fingers, before turning her around, looking at her in an evil way, “You asked for it.”

And for the next five hours, we kept devouring each other until we both laid on the bed with short breaths and weak bodies.

She… Was indeed a bit different. She got that lust from before, but it tasted different. It was like the same person but I got to meet her after ten years being apart or something.

She got new tricks, had new spots to get aroused and moan from. She was aggressive and bold before, but this time she felt like she was trying to conquer and dominate me all the time.

Of course she failed, as I was the one who got to dominate my girl, not the other way around.

“Who are you?” and as I got a few minutes to catch my breaths, I noticed that she recovered faster, much faster than before.

In previous times, she always went to sleep, losing her consciousness after such intense intimate time together.

Yet this time her eyes were wide open. Her two lumps on her chest kept rising up and down, but she didn’t seem as tired or exhausted like before.

“Did you think only one soul got over me?” and as she opened her mouth, I got to see a weird satisfying smile on her face, one that never appeared before over Hilary’s face.

This one looked more devilish than ever.

“Who are you?” and with a swoosh, my light glaive appeared. I didn’t have my strength sacrificed as I didn’t see any value in wasting my souls over such a thing during my travels.

“Don’t worry, I’m still Hilary,” she put a face, one that looked truly exhausted and tired, with semi-opened eyes. It was just the same face that my chick put after any time together and when she was about to sleep.

“And I’m not,” and then her face changed again, showing her sober look, with such daring eyes that seemed to want to devour me again.

“This…” It felt really weird. It was indeed her, but it wasn’t.

What? Did she get a personality change? Or did she get that old and nasty soul disease humans had before the apocalypse? The one called schizophrenia?

“Tell me, human race Hye…” and just as she said it, she sat straight, looking at my glaive as if she was looking at a toy. Her way of calling me stirred up all the vigilance inside me.

This way… It was never said to me except by races other than my humans!

“Tell me… Have you ever heard of demons?”

“Demons? The ones in the ancient stories?” I raised an eyebrow. For a reason, this thing inside my Hilary, or this new Hilary, seemed to not fear my glaive at all.

So I put it down and used it as a stick instead, leaning my head over it and watching her while she added:

“Are you… Part of that race?” I slowly asked, while every single feature of her didn’t miss my eyes.

And as I said it, she slowly nodded.

“No, I’m still a human,” she shook her head, making me more puzzled.

“Don’t look at me like this, I can’t control myself when you do,” she laughed, such a laugh that managed to turn me on.

Damn! Were demons all this sexy?

“I’m… A mix of the two races I guess,” she raised her eyes to the ceiling, patting over her lips with the tips of her fingers in such a tempting way.

“I got where the human soul came from, but what is all about this demon soul? How?”

“Do you think your enemies belong to which race?” she suddenly looked at me in such a serious way, saying such dangerous words.

“I am… Or was part of that race. We aim to turn the entire cosmos into a living hell, a place where we will call home.”

“Don’t be surprised. Although these are just memories of my demoness soul, the one that controlled your beloved girl, they are correct and solid. We are your enemies, everyone’s enemies. And… We aren’t alone.”

I never expected any of this. I always craved to get more information about these mysterious enemies. Yet when I got the chance to have such, I didn’t feel the same excitement or joy I expected to have.

“You don’t look that happy to hear such secrets. What? Did anyone race me up and tell you about this before me?”

She looked a bit sad, and I couldn’t help but sigh. “No, you are the first.”

“Cool, then you shall reward me.”

“Come on! Don’t be stingy…” and just before I could get a head or tail of what was going on, she jumped again on top of me, “give me a handsome reward using your precious thing down there.”

And before I could say anything, she sealed my lips with hers while her hands moved, touched my body, reigniting my fire once more.

Ok, if you wanted to get rewarded in such a way, then don’t blame me later on for tearing you down till near death.