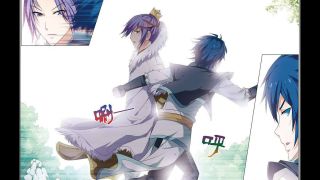 “Please lord, leave them. Our forces need more pressure from time to time. And with the presence of the towns and villages behind them, it will look exactly like the apocalypse.”

I got his point. Damn! This kid really was a war maniac!

“Cool,” and under the silent pleading gazes of Lily I had to agree, “but you have to get big weapons to help if things went south at some point.”

“That… I won’t say no to such an offer, lord,” and he finally lowered his ego and agreed to my suggestion.

“Tell me, have you sent people there to train?” I pointed towards the other far away and not clearly seen shore.

“Yes lord, I had to improvise and do it. I also had to arrange people in different groups just to make sure everyone will get proper rest and training chances.”

“Also there are many towns and villages at the other shore,” he pointed at the direction of that shore, “we had to do so as all the paths in between mountains and a very huge space inside the mainland were already occupied.”

“I’m waiting for the promised help.”

“I said I’ll bring them,” I rolled my eyes, “but first I’ll leave you here to arrange for things.”

“You don’t plan to abandon us, right?”

“As if I did it before,” I laughed before looking at Legend. This kid made me feel bitter. He was in a very poor state.

“Here,” I took out a dark gold grade full body armour, a strong shield, two swords, and a big axe, “I don’t know which weapon you prefer, so…”

“How about a glaive?” he looked at my dragon glaive, making me wonder if he was eyeing it or something, “just to be like lord.”

“Then take this,” I got him a nice dark gold glaive, “it looks just like mine.”

“Thanks lord,” Legend showed a genuine happy smile on his face, making me laugh.

“Don’t just run away and forget about us,” and before I left, Lily shouted this, making me raise my glaive high in the air without saying anything.

I didn’t return directly to where I stopped. First I used one of the bookmarks I saved before, leading me to the place where I summoned the little turtle before.

The place should be in the mountains, but right now there were lots of people living here. Seeing such densely packed towns and cities made me admire this place.

This world… I swore I’d turn into a place of heaven for all my people.

No matter where they came from, no matter their origins, they’d all enjoy such heaven with me.

“It’s not suitable here,” I looked around and the place was occupied already. The building process didn’t fully occupy the paths in between mountains, but they got at least two thirds of them covered.

The path I was flying on top of was almost filled. I wanted a very vast region, a place where it would turn to a huge base of my newly acquired people.

That was how I’d solve the problem of lacking generals. I got ten races of the mightiest and most ancient ones in the universe.

Just looking at how the Hectors did things here made me envy them. And these weren’t even close to the mightier Toranks or Hescos. Not to mention the ten ancient big races.

Asking these races to give me leaders and generals? I was sure they didn’t have a big fight in their lives before, but they hailed from such a fierce army.

And that blood was just like fuel, waiting for a spark of fire to get ignited.

If not for the deep grievances with the ten races from the alien universe, I’d rather prefer to ask them to come here instead.

At least they got rich battle experience, kept training as I saw it myself when I came to the underground world.

The grand formations they formed were still fresh in my mind. It told me a lot about how deeply prepared they were.

I kept flying for a few hours before I finally entered the vast ocean of trees. I looked at this place and decided to keep moving forward.

I flew for ten hours straight before I decided to stop. I saved this bookmark before opening a portal and went back to the place of my pocket world.

“Lucias, spread the word over my ten universe races,” I called for Lucias before asking him this, “make them move their people through the portals I’m going to open. Ah, also make them select capable leaders and generals.”

“To train my soldiers and make them also train their forces.”

“Oh, so they can also bring their forces to train?” Lucias just proposed such a nice idea that I missed.

“Sure, it will be great,” I nodded, “just make them bring such people to one side and wait. I’ll open different portals for them… Make them wait there.”

I selected a far place deep to the south from their current location.

My universe forces were situated in the south. As Lucias moved, I waited for a few minutes before I started to open portals all over the place.

Moving such a huge number of people would take many portals and lots of time. So I made sure to spread at least ten groups of portals, each had at least one hundred in them.

Then I went to the place I pointed at before, and started opening portals leading to the big military campus directly.

Then I sent a message to Lily notifying her of that when I saw a huge number of people coming towards my direction.

[Make sure to welcome them, and see who is going to be leaders and generals. Use them well]