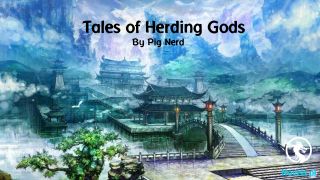 «God of Illusions (Web Novel) - Chapter 548: The Ultimate Version of Devouring the Heaven and Earth!

Chapter 548: The Ultimate Version of Devouring the Heaven and Earth!

How big is the biggest face you have ever seen?

As big as a pot? A millstone?

If You Feng was asked this question, he would tell you at once: As big as the sky!

The size wasn’t even the scariest thing, but the fact that you would never forget this face after a glance! Because of the unforgettably sleazy expression on it!

In the air was an enlarged version of Bai Xiaofei’s face smiling down. The next second, the giant face opened its mouth and sucked in. Immediately, a visible energy column shot up into the sky and was sucked into Bai Xiaofei’s mouth like a noodle strip.

The shock on You Feng’s turned into horror. The noodle strip was energy drawn from his body!

If the energy sucked away by the golden tentacles before was like a bowl of water from a tank, then this noodle strip was equivalent to smashing a big hole at the bottom of the tank. You Feng struggled against the huge face for control over his own energy, but no matter how hard he tried, it was futile as the energy showed no sign of returning.

At this rate, he would run out of energy in a few more seconds!

It was a pity that the big face in the sky didn’t last that long. Bai Xiaofei suddenly spat out a mouthful of blood and the huge face vanished. Even Blackie was forced out of its Spiritualization state.

Seriously injured, Bai Xiaofei found it difficult to even flap his purple wings and fell straight to the ground like a rock. Right at this time, Hu Xian’er had secured her balance from the explosion earlier and ran back, catching Bai Xiaofei in her arms.

Meanwhile, You Feng still hadn’t recovered from the horror just now, still lying on the ground in a daze. A normal creature could never shout in joy right after a narrow escape but would be completely weak in a puddle of mud like the current You Feng.

And this was also the only chance for the human party to kill him. Once he came to his senses, the tables would be turned!

The other two Exquisite Rank puppet masters weren’t stupid. If they couldn’t grasp this opportunity, they wouldn’t be worthy of their rank. Bolting towards You Feng, they smashed their best attacks straight down onto him.

At this point, You Feng had only just returned to his senses, and it was absolutely too late. Relying on his own reaction speed, he had no time to hide or block the attacks of two Exquisite puppet masters.

The left foot had just been withdrawn from the gate of hell but the right foot was stuffed in, this was exactly how You Feng felt at the moment.

The split second the attacks were about to hit their target, the surrounding thick fog suddenly gathered and enveloped You Feng. When the attacks fell, they only blasted away the fog, revealing nothing as You Feng had already disappeared!

Everyone could guess that this dense fog wasn’t simple, but its ability to take away the duck that was next to their mouths was something no one expected. If this ability could be used at any time, Starnet would have zero chance of winning!

Looking at one another, the two Exquisite puppet masters revealed pity. Killing a Monarch Rank magical beast was definitely something to brag about for their rank, and such an opportunity had been right in front of their eyes. However, this wasn’t the time for regret. Compared to unwarranted fame, handling this chaotic situation was the top priority.

With this thought, the two Exquisite Rank alumni came to Hu Xian’er’s side and looked deeply at Bai Xiaofei, who was waking up from his brief coma…

Who on earth is this young man?

It was no secret that Hu Xian’er had a puppet that could control time, but it was beyond their belief that she who had such an ability actually listened to Bai Xiaofei. In addition, Bai Xiaofei’s heaven-defying ability just now didn’t seem to be fake, even they at the Exquisite Rank weren’t certain they could create that kind of aura. The two alumni scanned Bai Xiaofei and found out that he was…

“What’s the situation?” asked Bai Xiaofei as he completely woke up, ignoring the expressions of the two Exquisite Rank puppet masters.

“You Feng was taken away by the strange fog. I sense no other magical beasts in this area, no one is approaching either,” said Hu Xian’er as her ears twitched.

After reaching the King Rank, the innate ultimate skill awakened in Hu Xian’er wasn’t the strengthening type, it only upgraded her hearing. However, the extent of this upgrade was a little scary. As long as she wanted to, she could even hear sounds inside Starnet all the way from the inner layer of the Infinite Mountain Range!

It was a pity that Hu Xian’er wasn’t capable of fine control just yet. Once she expanded her hearing, all sounds within that range would flood into her ears, which was really uncomfortable…

With a long sigh, Bai Xiaofei sat up with Hu Xian’er’s support.

“Help me watch the surroundings, I need time to recover,” saying this, Bai Xiaofei closed his eyes and two Starnet Stones appeared in his hand.

His physical condition was in a terrible state. All the meridians in his body had burst, his internal organs were damaged, and his bones and tendons suffered in different degrees… To put it bluntly, there was no intact area in his body from the inside out!

If it weren’t for his perverse physical body saving up origin energy for times of need, he would have been dead by now.

And the cause of this was: over-absorption.

Inspired by the creations of the tentacles just now, Bai Xiaofei immediately considered the possibility of using Blackie’s Virtual Reality to strengthen Devouring the Heaven and Earth so as to quickly plunder a target’s energy. Clearly, his experiment succeeded.

With the collaboration of Virtual Reality and Endless State, the ultimate version of Devouring the Heaven and Earth was forged. Needless to say about the effect, even a Monarch Rank magical beast couldn’t fight back after being caught.

Unfortunately, Bai Xiaofei currently couldn’t maintain that state for a long time. The ultimate version of Devouring the Heaven and Earth consumed more than just origin energy. For some reason, it even madly extracted his spirit!

On a different note, Bai Xiaofei’s body couldn’t contain so much energy, or else he wouldn’t have ended up like this…

In any case, the success of his experiment was a great gain. Just because he couldn’t use it now didn’t mean he couldn’t in the future. What’s more, even if the ultimate version couldn’t be used, the simplified version wouldn’t be a problem. As long as he was willing to study deeper, nothing was impossible!

And this was only the tip of the iceberg for Virtual Reality. The deeper he dug in the future, the more he would understand why Lei Shan regarded Blackie as a treasure!