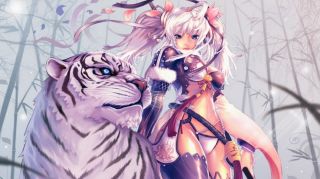 «God of Fishing (Web Novel) - Chapter 2385: The Mastermind Behind the Scenes

Chapter 2385: The Mastermind Behind the Scenes

Cao Buqi was dumbfounded. No way? We’ve hunted Cao Buqi eight times, but you haven’t come out once. Why did you come out this time?

Seeing Han Fei walking over from afar with an unfriendly expression, Cao Buqi, the peak-level late-stage Star Transformation Realm cultivator, and the other person were dumbfounded.

In an instant, the three of them were on guard. This guy was not Cao Mengde, but Han Fei, who challenged the Heavenly Race, defeated the Dragon Fighting Street, killed Yi Qianxing, and fought Zhao Qinglong head-on. In just a few years, Han Fei’s name was household in the Divine Capital Dynasty.

Seeing Han Fei, Cao Mengde almost burst into tears. He wailed, “Brother Fei, save me! This man’s Extreme Cold Pearl is an ultra-quality godly weapon that can suppress all flames. You can’t miss it!”

Cao Mengde knew Han Fei’s personality very well, so the first thing he did when he asked for help was to tell him the level of the Extreme Cold Pearl. He bet that Han Fei would definitely be tempted.

Sure enough, Han Fei’s heart skipped a beat, and then his soul and blood heated.

Han Fei didn’t expect that he would encounter an ultra-quality godly weapon so easily. This thing turned out to be a treasure of the same level as the God’s Prayer Bead.

There was no need to emphasize the effect of the God’s Prayer Beads. Hanging them on his body every day, even when he was sleeping, he was cultivating. It was very beneficial to body tempering, soul training, anti-poison, and cultivation.

Although this Extreme Cold Pearl seemed to have a single function, it was an ultra-quality one. This was the second ultra-quality godly weapon Han Fei had encountered.

Cao Buqi seemed to realize that something was wrong, but now Cao Mengde was almost under his control. He said telepathically, “Master Qiu, come on, kill Cao Mengde. Don’t fight Han Fei.”

In the blink of an eye, Master Qiu had already been vigilant when Cao Mengde shouted. Seeing Han Fei appear, he had already prepared his strongest attack. Even if Cao Mengde’s physique was not weak, he could still kill him.

Master Qiu had almost inserted a hand into Cao Mengde’s body, but suddenly, he forgot what he was going to do.

Shocked, he tried to activate the Star Bead and launch his strongest attack, hoping to instantly kill Cao Mengde. However, in the next moment, his consciousness suddenly blurred.

Basically, those who fought Han Fei were either killed or lost without knowing why. The only people who knew Han Fei’s trump card were the people of the Heavenly Race.

He felt that he knew Han Fei’s personality. Han Fei was a money-grubber! Even if he caught him, he might not kill him. As long as he promised him resources, Han Fei wouldn’t kill him. He could even give him the Extreme Cold Pearl. After all, his identity should be more valuable than Cao Mengde!

However, Cao Buqi underestimated Han Fei too much. At this moment, Cao Buqi lost consciousness and fell to the bottom of the sea with a bang, creating a big pit.

Han Fei grinned slightly. He knew that in this demonic source’s territory, there was already a huge whale of the Sky Opening realm coming over, but it didn’t get too close, as if it was waiting for the battle here to end.

In an instant, Cao Buqi and Master Qiu were both dead meat. The Cao Family cultivator’s first reaction was to run away. However, what he didn’t expect was that in the next second, he fell to the bottom of the sea too.

Cao Mengde was dumbfounded. Han Fei’s figure became majestic in an instant. Han Fei didn’t even move, and the three cultivators were defeated. God knew what kind of monstrous ability this was!

Cao Mengde burst into tears. “Brother Fei, you’re finally here. You don’t know how long I’ve been waiting for you! Brother Fei, I, Cao Mengde, will definitely repay you for saving my life… Blah, blah…”

Han Fei, on the other hand, waved his hand and said, “Cut the crap. No more acting, OK? When did you know that I had arrived?”

Hearing Han Fei’s words, Cao Mengde hurriedly said, “Brother Fei, the thing we gave you was mutual, so I know you are constantly approaching. You were already here when I was chased for the fifth time…”

Han Fei nodded slightly. “No wonder, no wonder I feel that these days, Wu Bufan, Luo Dafei, Li Chen, Zhou Run, and the others are all approaching me. It’s indeed because of this thing. Since you know that I arrived that day, why didn’t you ask for help?”

Han Fei grinned and said, “You’re actually worried that I won’t help you after knowing that you’re hiding your strength, right? Because helping you means offending many people in a big clan. I’ve been thinking about this question for days. To be honest, I’m thinking about it now.”

Cao Mengde’s heart suddenly tightened, so he hurriedly said, “Brother Fei, we all know that we have let you down, but we have no choice. With our current status in our families, we can only get limited resources. Otherwise, we will definitely not be stingy with your remuneration. In fact, I don’t know what to do next, but Brother Fei, what we lack is just an opportunity. We will definitely remember this favor. If we rise in the future, as long as Brother Fei needs us, we will do our best to help you.”

Han Fei chuckled. “Even if I want half of your Cao Family, can you give it to me?”

Cao Mengde nodded slightly. “We don’t have any feelings for our family. Our family only brings us endless despair. Besides, only in our family do we know that if we don’t prove our Dao, we won’t have any say unless we’re peerless Heavenly Talents. Even if we’re peerless Heavenly Talents, as you’ve heard, Brother Fei, my younger brother could compete with the main branch in the past, but his blood and spiritual heritage were pulled out and he died a tragic death. Therefore, whenever there’s a chance, I hope that the Cao family will be destroyed.”

Han Fei couldn’t help but laugh. “Without the Cao Family as my backing, what can you give me? I think even if you can enter the arena competition this time and show your talent, you are still not strong enough. There will still be strong masters in the family who will pressure you. You might still be unable to escape your fate.”

Cao Mengde nodded. “Therefore, many years ago, we have been accumulating resources and building our connections. We have never used these people, not even once. We are waiting for their growth, and we are waiting for an opportunity. All the races in the East Sea Divine Realm will select talents from this 100,000-year competition. We have already decided to go to the Capital of Horror, which is a paradise of freedom. As long as we don’t die and have a chance to continue to grow, we will return to the Divine Capital Dynasty in the end and make these people pay the price.”

Han Fei was curious. “So many of you have been hiding your strength together for so many years. I don’t think every one of you is so smart. Therefore, there should be a leader among you, right? It’s this person who is giving advice and asking you to carefully disguise yourselves until now.”

Cao Mengde gritted his teeth and nodded slightly. “Since Brother Fei asked, I won’t keep it a secret…”

Han Fei interrupted, “Are you sure you won’t keep it a secret?”

Cao Mengde explained, “He told us before the first round of the qualifiers that you must’ve been suspicious of us, so you had been testing us in the third round. He said that we could show our real strength in the fourth round. If you didn’t take action, we could only accept our fate and see if we could survive. But if you did, you don’t have to hide anything from you.”

Han Fei couldn’t help but be interested. That person was really brave and intelligent.

Han Fei thought of the names of those people and said, “Tell me who this person is! Is it the one smoking the pipe or the one playing with walnuts?”

Han Fei couldn’t help being surprised. Zhou Run? The one playing with the backscratcher? He thought this person might be Wu Bufan or Li Chen. He thought that Luo Dafei wasn’t quite likely to be that person. As for Zhou Run, Han Fei would subconsciously ignore this person because he had almost no sense of existence.

Han Fei couldn’t help but exclaim in his heart. This person had made it so that others couldn’t remember him at all, but he was still in the group. He seemed to have no status in the group, but was still a member of the group.

Who would have thought that such a marginal figure turned out to be the smartest one?