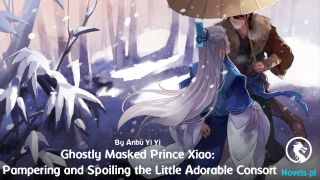 At that moment, a force that was both familiar and unfamiliar at the same time appeared in front of him.

As soon as the God of Destruction’s attack was diffused, Fei Yan could see its residue in front of him as a surprisingly gentle mist.

“Yan’er, take a step back.” The cold and familiar voice made Fei Yan tremble.

Fei Yan could not see anything but in that darkness, he felt an unbridled joy!

Jun Wu Xie had stood in front of Fei Yan and extinguished the God of Destruction’s attack at the critical moment.

Jun Wu Xie’s entire body was surrounded by a golden aura. It was neither blinding nor huge but it was so rich and mesmerising that nobody could ignore it.

Standing behind Jun Wu Xie, Fei Yan could instantly feel the calming effect of her power. It was as if all the pain and unease he was feeling had disappeared.

“Thank you for what you’ve done.” Jun Wu Xie smiled faintly at Fei Yan as she looked back at him.

Yes, she still had people to protect. How could she be defeated so easily?

Fei Yan could not help but smile from the reaches of his heart.

Standing opposite Jun Wu Xie, the God of Destruction’s expression changed as soon as he saw her.

He was a god and was familiar with god level powers. Earlier when she and Jun Wu Yao charged into the hall, he could sense that they were strong and even had some chaos power but he did not feel any pressure.

But he did not know why he felt a strong sense of pressure when Jun Wu Xie appeared in front of him this time.

That kind of pure divine power, which was gentle and seemed to envelope others felt harmless to most, but for the God of Destruction, it was an extremely unbearable softness!

“Your power…why has it become stronger!” The God of Destruction stared at Jun Wu Xie in shock. He could not believe that not only did she not fall into despair after Jun Wu Yao’s death, she instead increased her power level exponentially!

That power was reminiscent of the Great God that the God of Destruction saw many years ago.

Jun Wu Xie slowly turned to look at the God of Destruction. When his eyes met her own golden gaze, it was not hate that could be seen in them but a cool, calm, indifference.

“To kill a God.” Jun Wu Xie raised her chin slightly and looked at the God of Destruction with a cold, icy stare.

“You claim to be a god but have long not been fit to be a god, much less the only god in the Three Realms. Today, I will have a taste of what it feels like to kill a god.” Jun Wu Xie stated matter of factly, her voice not betraying any emotion.

The God of Destruction looked at Jun Wu Xie silently. The Jun Wu Xie in front of him seemed to have snapped out of the despair she was in when he last saw her. She now had an air of supreme confidence, which when combined with her newfound powers, made the God of Destruction feel a sense of oppression that he had never felt before.

“Kill a God? You? Do you even know how you’ve managed to survive till now? What are you going to use to kill me? Hahaha!” The God of Destruction laughed loudly in spite of his unease, hoping to dispel those feelings with his bravado.