Even Yan Wan was so close to jump and hit the roof after secretly monitoring the movements of Jun Wu Xie for two months!

“What is this little bastard doing! How is he so dumb!” Sitting in the main hall of the city palace, Yan Wan was so angry that his whole face went green.

And there was Liang Shi Shi, quietly standing aside, not having the guts to even let out a fart.

Before this, Yan Wan had let Jun Wu Xie take full charge of the outbound course of the ships. Besides wanting to procrastinate the progression of his cultivation, he had also asked his people to covertly find the leaders of each ship in order to let them hunt less Sea Spirit Beasts after they departed so that he would be able to accuse Yan Hai for slacking on his jobs.

But even if he was beaten to death, he would have never thought that the Sea Spirit City would actually fail to bring even one Sea Spirit Beast back for two consecutive months!!

More than a hundred crews were dispatched and there were nearly three hundred ships on the sea. Even if all those ships squeezed together in the same region and simply just cast their nets into the ocean, they would still be able to catch quite a number of Sea Spirit Beasts, yet they just returned miserably without even getting a piece of the creature’s scale!

Even Yan Wan who was thinking to set Yan Hai up was so mad that he was almost going to cough blood out!

During the two months, the Sea Spirit City was still constantly exporting the blood, bones and meat of the Sea Spirit Beasts to the whole Upper Realm, causing the plentiful depot to be half-emptied all of a sudden!

He, the Master of the Sea Spirit City, would also hit the bad patch!

Before this, Yan Wan was still feeling complacent about his plan, but now, he just wanted to slap himself. Why would he be blinded by the short-term benefits in front of him at that time and handed over the duties to Yan Hai?!

“This is so sickening! This is truly sickening! Is the bastard born to stand against me? He wants me dead!!” Grinding his teeth, Yan Wan glared at the floor in front of his legs with a gloomy face.

“Master… Please do cool yourself down.” Noticing the raging expression of Yan Wan, Liang Shi Shi quickly gave him a cup of tea as she tried to comfort him with her soft and gentle voice.

“Cool my ass down! This was the fabulous idea you gave me? Let the bastard handle the outbound course of the ships? He wants to die, that’s fine! But if we can’t fully supply the Sea Spirit Beasts, there’s no need for him to even snatch the position of the city lord of the Sea Spirit City from me, the people above me will straight away slash my head off! If His Lord knows about it…” Yan Wan couldn’t help himself from shivering in fear. The problem had totally gone beyond his expectation.

At first, he was just thinking of surreptitiously causing Jun Wu Xie some trouble, but he wouldn’t have thought that Jun Wu Xie would actually choose to send the helve after the hatchet. Don’t even mention about hunting a small amount of Sea Spirit Beasts, she straight off brought hundreds of empty ships back!

The Sea Spirit Beast stocks left in the entire Sea Spirit City could only let them sustain for, the most, one month longer. If Jun Wu Xie was still going to screw everything up this month, then Yan Wan would also be implicated in the problem!

“Go! Ask the bastard to come and see me now! Let me see what the hell is he playing on! He’s the one who wants to die, not me!” Yan Wan was so furious to the point that his whole body was trembling in wrath. He thought that no matter how pissed off Yan Hai was, all he could do was just to swallow his frustration up in silence and carry out the tasks submissively since hunting the Sea Spirit Beasts was something that was connected to the entire Upper Realm. Who would have thought that this guy would actually go to such extent!

After being shouted at the face by Yan Wan, Liang Shi Shi did not dare to make a sound anymore, scaring that Yan Wan would kill her in a sudden burst of rage. At the moment, she regretted mentioning the idea so much. She shouldn’t be talking anything during that time!

Support
Random Novel
Until the Saint Loves Back 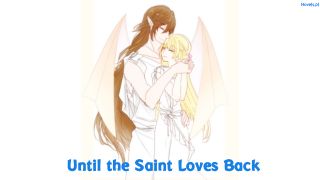