Support
Random Novel
The Strange Adventure of a Broke 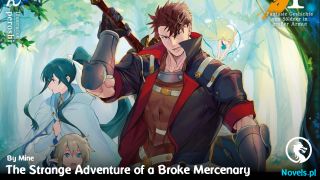 The path toward the Bonehead tribe’s home village was rather simple. The road was mostly flat as most places in the dried-up desert were.

There was some up and down as hills appeared everywhere, but most places were still flat and cracked from the heat.

The group of people behind Alex walked with almost no loss of momentum in their strides. In fact, the hope of getting their home back seemed to have reinvigorated them.

Alex was on a constant lookout for beasts as his spiritual sense was constantly activated all around him.

However, he didn’t see that many, and they never really came toward them.

They walked without stopping and before they knew it, night fell. The hot day transitioned into a cold night. However, that did not stop the people’s advancement at all.

Since every single one of them was a high-level body cultivator in their own right, they could handle this small chill.

This far out, Alex finally saw the first tribe other than the Stepstones tribe. He didn’t know what these people were called, but they were settled in a valley hidden behind a slightly tall set of hills.

He quickly scanned the place for his father, and when he realized there wasn’t anyone that looked like him, he moved on.

Li Yun said that the tribe they had just walked past was called the Valleywind tribe. Alex continued to be surprised by just what random names the tribes gave themselves.

“Well, you know, since we aren’t like a family or something, we have to distinguish ourselves using something after all. These people call themselves Bonehead because they used powdered bone and water to put on their hair.”

“Our home looks like a bunch of stepping stones. That valley gets a lot of wind. So on and so forth. We don’t really care if the name is good or not, just that you can say who we are after hearing the name,” she said.

“I see,” Alex said. “I’m just used to hearing sect names that seem to be grand and well thought out. Hearing such random words being used throws me off quite a bit.”

“Since you make it sound like you’ll be staying in the wasteland for a significant period of time, you might as well get used to it,” she said.

“That’s not true,” Alex said. “I plan on not staying here for longer than I need to.”

Li Yun stayed quiet for a while. A few thoughts ran through her mind and he asked, “Where do you plan on going next? Can you take me?”

“I’ll be heading south,” Alex said. “I need to get out of the Wasteland as soon as possible so I can gather Qi again. With Qi, I won’t have to waste a long time to find my father. Who knows, he might have also gone south and started cultivating already.”

“Since I’m going to have to struggle a lot, I can’t take anyone with me. Aside from that, I will have to find a way back to the other continents. Since flying through the ocean is so hard, I will need to focus on doing whatever I can otherwise to go back. If I were to take another person with me, that will double my difficulty. That’s why I’m intent on not taking anyone with me,” he said.

Li Yun got a little sad when she heard that. She had really come to expect Alex as someone she wanted in her life, but seeing that could never truly hurt her in ways she hadn’t been hurt before.

The rest of the journey was a rather quiet one as the only noise in the wind were footsteps and tiny whispers.

No one dared make a noise that was louder than the night wind itself.

The east slowly lit up, letting them know that the sun would rise at any minute now. Still, they continued walking without stopping until a few minutes more when Alex stopped and told the rest of them to stop as well.

Alex decided to see it all for himself, so he quickly expanded his field of view, taking in the nearly 2 kilometers-wide area that was covered in beasts. Compared to this, the beasts from the other night were nothing.

“Everyone, settle here,” he said.

“Huh?” Han Guanxi walked forward. “We’re not that far away from our tribe’s grounds. Just an hour or two and we will reach it.”

“I know,” Alex said. “That’s why I told you all to settle here. Do you want to fight the beasts again?”

“Oh,” the man said. “I’m sorry. I thought you were just saying so because you didn’t want to continue moving for today.”

“It’s fine. Just settle here for a while. Since there are so many beasts, it might take me a while to defeat them all,” Alex said.

“No, there are simply too many beasts for me to be able to keep you alive. Its better if you stay here with them,” he said.

Alex was about to refuse too, but he paused for a bit. However, after thinking for a moment, he shook his head. “You’re too weak,’ he said. “I know how you feel, but you will have to stay and wait. That’s all you can do right now.”

The man’s face saddened a bit and he lay on the said.

“I will be leaving now,” he said. “Before I go, is there anything I should keep in mind about your tribe’s grounds? Some buildings maybe that I shouldn’t destroy.”

The man thought for a bit. “As long as the Sacred flame still burns when we get back, we will be happy,” he said.

Alex smiled at just how little the man was asking from him. “That’s doable. Alright, I’ll leave now. Don’t leave this place unless something strong comes this way. If it does and you can’t win, just run away.”

Alex finally left the group and walked on his own for another 8 kilometers which easily took him another hour to reach.

The moment he got remotely close to the tribe grounds, a bunch of beasts noticed him and came to eat him as he was the only source of food for them in a very large radius now.

Alex saw the beasts as well and brought out Midnight to fight. Without even pouring at Qi into the sword, Alex easily fought off the beasts.

He cut them up however he could and collected the corpse into his storage ring. Since this was the only source of usable resources, Alex wasn’t going to simply give up on them.

Another few beasts noticed him and came to fight him. The same thing repeated once more as Alex got his hands on another few corpses. However, one of those beasts managed to run away injured, and Alex quickly caught it in his spiritual sense.

He was about to use Heaven’s Impact to defeat it, but for some reason, he wanted to see what this beast was going to do.

He saw the beast slowly make its way through the other beasts, who quickly stepped aside.

“Ah,’ he thought when he realized what the beast was doing. They were going for the sacred flames. “So they know that the flame can heal them too, huh?”

Since the beasts were occupying the small hall where the Sacred flame was, Alex wondered if they had come for the Sacred flame at all. After all, that made sense for the single reason that they could heal after fighting.

And from what he could see, the beasts really did fight almost all the time. ‘Is that how they get strong? Random fighting with immediately healing?’ he wondered.

If that were the case, he would have to get rid of the Sacred flame before fighting the rest of the beasts. However, if he did so, there was a chance of the beasts running away from this place, only to return later.

This meant that, whether he liked it or not, he would have to kill all the beasts in the tribe just for the sole reason of not leaving an enemy for the future.

Alex quickly counted the number of beasts that were there, but there were simply too many to completely count them. If anything, there were surely above a thousand different beasts, and each one of them was quite strong too.

He checked his tiny reserve of Qi just in case things got dicey and walked towards the closest beast.

And so began Alex’s fight against the thousand different beasts that had taken over the grounds of the Bonehead tribe.

Alex fought all beasts one by one. Whether it was a fox, a snake, a vulture, a group of bugs, some worms, or even some deadly poisonous scorpion, none of them could withstand more than 2 of his attacks.

He fought outside of the tribe grounds, inside of it, inside houses, and even close to the hall where the Sacred flames were.

One by one, Alex killed all of them and took their corpse into his own storage bag.

After a while, he looked around to see the remaining beasts, and to his surprise, there were none.

Alex had done it. He had successfully killed all the beasts that were plaguing the tribe’s grounds. Next, he had a little plan of his own.