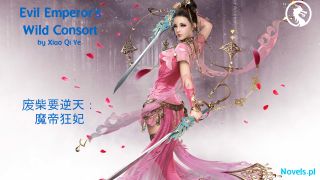 Polaron City was The Athilia Kingdom’s biggest Granary. They stored food for the harsh winter and emergencies were stored in the city, and that city was under the rebel army’s control now.

Zhang Mengyao planned to take over the city because they could not rely on hunting to maintain their supplies while they were in a war. On top of that, the supplies in Harnian City were only enough for one or two days if they wanted to feed the citizens too. So, yeah, they were low in supply and made their move to Polaron City to secure the food. So, two days after capturing Harnian City, they immediately made their move to Polaron City.

Three kilometers away from the Polaron City, The Tarrior set up their camp in the middle of the forest with their armies spread out in the forests. In the main tent, Zhang Mengyao gathered the leaders to talk about the plan to take over Polaron City.

”Ten days, nine nights, Supreme General,” Alton responded, “But I don’t think you need to worry about His Majesty. I finished the Trial of the Ancient in two months and eight days. Of course, His Majesty is stronger than me, so he will finish the trial within one month. We still have time before his return.”

Zhang Mengyao shook her head, “That’s fine. We are not in the race, so we must prioritize safety over time,” She then glanced at Moonsong, “Care to share your plans with the others, Legion Commander Moonsong.”

Moonsong would lead the attack on Polaron City. Chief Moon had shared the idea with Zhang Mengyao, and the latter agreed with his plan.

”The plan is simple. We will launch night raids once more but with a slight change this time. My Tribes and the Elfs will take over the wall, but we will not start the fight immediately. The Moon Tribe will sneak into the city and assassinate The Rebel Army as many as possible while the Elves secure the entrance for us. Once The Rebel Army is alerted of our presence, that’s the time the main force will enter the city,” Moonsong explained. Just like he said, it was a simple plan that was easy to follow. There was no intricate strategy in it.

”Why do we have to wait until the enemy is alerted to enter the city? Isn’t it better if we enter the city once The Moon Tribe and the Elves secure the entrance?” Alton raised his hand and asked, “We don’t have to attack them directly, but it’s ideal for taking the position before the fight breaks out, no?”

”I am just afraid that they will be alerted if we enter the city prematurely,” Moonsong explained.

”Don’t you and your tribe secure the entrance for us? If you manage to secure the entrance, then there’s no issue for us to enter the city. We can secure our position in the city and lock them down inside the city if possible. I do agree with the chance of alerting the enemy, but it can be solved easily. We entered the city in turn, a hundred people per group into the city and spread them out into the four sides and locked the rebels inside the city,” Alton spoke out.

There was no objection from Chief Moon, “Then I will lead the infiltration team, and Marshal Alton will lead the army to sneak into the city.”

At midnight, Moonsong led his tribe and assassinated all the guards on the southern wall. After the Moon Tribe took over the wall, The Elves replaced the Moon Tribe to guard the wall. At the same time, they opened the door on the gate. Just two small doors on the main gate as opening the gate would create a loud noise that might alert the rebel army.

Moonsong led the Moon Tribe into the city. He hid on the roof, and next to him was his daughter and Sir Lu An. Lu An joined the assassin team as he was more capable than any of his tribesmen in the assassination.

”Do we just kill the sleeping knights and ignore the patrols?” Sylvia asked her father while eyeing the patrol on the street. In each thirty-meter range, they would find a group of three patrols. One was holding the magic lamp, patrolling the street.

”Killing the patrols will raise suspicion, but if we don’t kill the patrols, they may be the first ones to notice the infiltration,” Moonsong voiced his concern. While the Moon Tribe was good at assassination, this was the first time he led his tribe to use this tactic. There was a shift change, and they did not know when the shift time for the patrol was. The patrol who returned from their shift might notice their comrades were killed once they returned.

”I have spied the city last night and got some useful information,” Lu An pointed at the tower that was as tall as a five-stories building, “They will ring the bell for the shift change. Didn’t you guys hear the bell when we secured the southern wall?”

Moonsong fell silent for a moment and nodded. He heard the bell as it alerted him as he thought they were caught, but that was not the case because there were no knights rushing to the southern wall.

”Then our first target is the tower, right?” Moonsong looked at the towers and looked around the city, trying to find more towers, but that was the only tower in the area.

”Sounds good,” Moonsong agreed with the idea and commanded all the Moonlight Rabbits. The Moonlight Rabbits split into a few groups, and Lu An moved alone with Yeon Hee. The hostage from the Haven Group was now working for the Intelligence Division.

”I will take care of the first tower,” Lu An pointed at the closest tower with his thumb. He did not wait for Moonsong to respond and disappeared into the shadows, while Yeon Hee was three seconds late in reaction.

Sylvia said farewell to her father and left with her group to the east side. She was leading five hundred Moonlight Rabbits on her own.

”Why don’t you take a proactive approach instead of listening to the youngsters?” Grand Elder Auron asked Chief Moon, “The plan is okay, but it’s something you can think of easily.”

Chief Moon smiled, “Lu An has a close relation to the Emperor. I am just taking a safer approach so I don’t offend Lu An. A youngster like him usually has a big ego, so I don’t want to accidentally offend him.”

”Then we are marrying your daughter to The Emperor for nothing if you are still afraid of him?” Grand Elder Olming furrowed his brow.

”I am not afraid of Lu An; having him on our good side will benefit our tribe more than offending him. Our Tribe will not be threatened by marrying Sylvia with His Majesty, but having Lu An on our good side can help to raise our tribe’s status within the Empire. This is just a simple political approach, Uncle,” Moonsong explained, “Let’s save our chat for later. We have an ongoing mission.”

”I guess I am too old for thinking that far,” Grand Elder Olming massaged his forehead and shook his head, “I will leave that to the young’un.”

The rebel army put a curfew on the citizens, so there were no people in the street but the patrol team. That made their work easier, and Polaron City was in a much better condition than Harnian City. The rebel army in the city still fed the citizens and did not torture them, just like what happened in Harnian.

There were seven people in plate armor; three people were sitting on the chair in the middle while the other four kept a watch out in four directions. Lu An jumped out of the shadow of one of the three guards. At the same time, his sword swirled around as the glint of the red sword flashed. The sword found the gap between the helmet and the plate armor, cutting the three people’s heads simultaneously.

Lu An reached toward the three bodies with his hand, and the three bodies disappeared. He put them into his inventory before they could make noise. After killing the three people in the center, he went for the watcher on the edge of the tower. A clean-cut in the neck and put the bodies into the inventory.

Lu An shook the blood from his sword and sheathed it back. By the time he killed all the guards in the tower, Yeon Hee had caught up. She quickly realized that the guards in the watchtower had been cleaned up.

”You are too slow,” Lu An said while putting the sword on his waist, “Should bring Viona instead.” There was a tinge of regret in his tone when he said the last part.