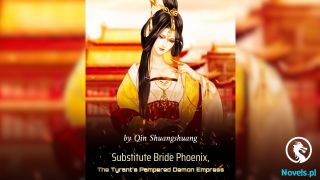 ”God?” Tang Shaoyang grew apprehensive when she called herself a God. No matter how confident he was in himself, God was on another level for him. He could not beat God yet.

”Yeah, not a God creation or something like that, but my level of power. The System categorizes me as God,” The female figure replied.

”What makes you different from the normal spirit aside from the process of the contract?” Tang Shaoyang overcame his nervousness with a lot of questions in his mind. Since the opposite party appeared not hostile, he took the chance to ask more questions.

”We can continue our chat if you can pass my test,” The female figure replied flatly, “I have seen your will power against my Ancestor. I am amazed that a mere Ancient Rank can stand up and challenge my Ancestor. Now I want to see your potential. I don’t want to form a contract with a weakling.”

”I have two choices for you to prove your potential. First, we can have a fight here. I will not go all out because that will defeat the purpose to see your potential. You don’t have to worry about that. Or we can explore the second option, a simple one, let me see your window status.”

Tang Shaoyang furrowed his brow. He would choose the first option if he was not in a rush. He missed the time to enter the Dimensional Tower, and he did not know if his people encountered trouble there, so he wanted to go back as soon as possible. However, he did not find the idea of showing his window status to someone he just met. He did not want to show his window status to someone he could not trust.

[I think it’s worth a try, Master. Showing her your window status does not hurt you that much. First of all, she is a spirit, so she could not harm you in any way. Second, even if she refuses to form a contract with you, there’s only one percent or even lower to see her as an enemy. Even if you meet her again in the future, your window status will not be the same anymore. Of course, the first option is better if you are willing to stay here for a while.]

Zaneos shared his thoughts to help his Master to make a decision. The Demon Swordsman believed they would spend another few days before Tang Shaoyang chose the first option. If Tang Shaoyang had to fight someone with the same level of power, it was not going to be easy to beat him even if it was a God. In fact, Zaneos wanted to see the fight as well. He wanted to see Tang Shaoyang go all with his current power. However, The Demon Swordsman was aware that his Master’s thoughts were elsewhere, not in the fight.

”I choose the second option, and I want you to make an oath before taking a look at my window status,” Tang Shaoyang chose the simple and fast route. He wanted everything done and quickly got back to Earth. He took so much time in the trial dimension.

”I am surprised you took the second option instead of the first one. It seems I misjudged you,” The female figure nodded, “I, Avyn, the last Kankara’Xeo, will not spread…”

”I, Avyn, the last Kankara’Xeo, vow with my life, will not spread Tang Shaoyang’s window status to anyone or use it against him in the future!” That was a simple and quick oath, but covered up everything Tang Shaoyang was concerned about.

The female figure was covered in white glow for like twenty seconds. It absorbed the white glow, an indication the oath was in effect.

Tang Shaoyang was not expecting her to make an oath by herself like that. He did not think it was possible to make an oath without a priest. However, he still could not trust the credibility of her oath, but again, he did not have the time to go through with all of that. Just like Zaneos said, there was so little chance that he would meet with this dragon beastmen in the future.

”I want to fight you too, but we don’t have the time. A Dimensional Tower just opened up in my world, so I need to return quickly,” Tang Shaoyang shared the reason before showing the window status to the female figure.

’But what is Kankara’Xeo? Do any of you know what it means?’ He recalled the female figure calling herself the last Kankara’Xeo instead of something like a dragon. In fact, he thought she was an Ice Dragon or Frost Dragon, something not far from that.

Tang Shaoyang did not receive a definite answer from all his spirits. No one knew, including Zara the Angel of Death and even Maldros the Black Storm Dragonewt.

Meanwhile, Avyn opened her delicate lips slightly as she was surprised to see the window status, ‘What is this? Two Classes? Two Talents? What with his race, is he not a human? Tang?’

Avyn stopped looking at the window status and flew closer to Tang Shaoyang. He was surprised with the sudden approach, but she held his cheeks before he could step back from her. For the first time, Tang Shaoyang saw Avyn’s crystalline blue eyes. Her eyes were the most beautiful eyes he had ever seen.

”Dragon Eye and also Demon Eye?” Avyn muttered as she was not expecting two different bloods flowed in a human’s veins. “What are you? A human? Demon? Dragon Descendant? I don’t have the knowledge about you? Tang?”

”I don’t think it’s included in the option. You only asked me to show you the window status, no?” Tang Shaoyang frowned.

”That’s true, but I can’t make the decision or judge your potential with no information. I don’t want to establish a contract with uncertainty,” Avyn released his cheeks and flew two meters backward, “If you refuse to explain your race, then I will rather wait for another thousands of years than gambling my life with you!”

Tang Shaoyang let out a sigh as he could not win against her with words, “Fine. Tang is a new race that I accidentally created. I was integrating with my demon spirit far too long that caused abnormality. Can’t you hear it? I have three hearts.”

Avyn fell silent for a moment before approaching Tang Shaoyang once more. This time, she suddenly put her right hand on her chest while holding his shoulders. Her strength was no joke that he could not budge even an inch, “That’s true. You have three different heartbeats. Interesting, but I don’t think Demonification is the only cause, it triggers evolution. You are still hiding something from me.”

”I don’t hide anything from you. I also only have limited knowledge about my evolution. However, I have a rough guess; the evolution is possible because of my first Talent, Divine Body. The Divine Body talent evolved to High Human, and maybe because I am a High Human, I evolved instead of dying. That’s the only thing I know.” Tang Shaoyang shrugged, “So now, three different bloods flowed in my veins, Dragon Blood, Demon Blood, and also a High Human blood.”

”Good. If you can make a new race, then your potential is endless. I have seen the remaining status too, having two Grade SSS Spirits is decent too. I guess you pass the second test,” Avyn nodded, “Then the last one, not a test, but your determination. Do you know your class is cursed?”

Tang Shaoyang was caught off guard with the last word. He never heard of it, “What do you mean by cursed class?”

Tang Shaoyang nodded his head, he fought Alton, the Legend Rank while he was still in Epic Rank. He thought he won because he had two classes and two talents. Later, he figured out that Alton also had two classes. He was not in that great advantage aside from the two talents he had. However, Spirit Integration was the one that helped him to win against Alton. He integrated with Zaneos, and he overwhelmed Alton with the Demon Swordsman’s knowledge. If he was not that crazy and summoned all his spirits to fight Alton, it was just a one-sided fight instead of a close fight. He responded with a nod.

”Because your class is disgustingly powerful, Gods don’t like you or to be more specific; Gods don’t like people who possess your class. They are jealous of your power. They feel threatened by your power, because once you reach the God Rank, you will overpower the other Gods. What do they do to prevent that from happening? They will try to kill you before you can reach God Rank, or Gods will bend together to fight you, to gang up on you! Hence I called it cursed class!”