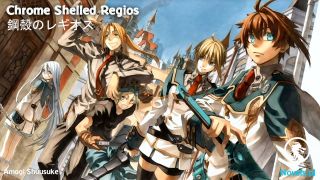 Chapter 918 Until Our Last Breath!

The three Tarriors had their bodies cut in half by Bolios. The armor did not matter as the sword sliced the armor through and killed three Tarriors in one strike. Even after, the Tarriors around the giant zombie did not retreat. Seven Tarriors thrust their spears toward the giant zombie, but Bolios spun with his six hands spread out, parrying all the spears.

Bolios was still holding the greatsword, and it sliced the seven Tarriors as it spun around, “No! Retreat! Get back into formation!” Gan Shuo yelled loudly, telling the Tarrior to get back. He did not know if he had to be proud or baffled as his subordinates faced the giant zombie fearlessly. In a different scenario where they had a small chance to win, he would be proud of them, but not this time. It was more like a suicide to him.

The Tarriors listened to Gan Shuo and tried to get away from Bolios, but the giant zombie caught two Tarriors. Two pairs of its hand held the head of each Tarriors and were about to crush their heads, including the helmet.

Gan Shuo sprinted in desperation, running as fast as he could to save the two Tarriors. However, he was just too slow to reach there in time. He was sent flying like eighty meters away by the giant zombie.

The two Tarriors started to scream as the helmet started to sink in. Just as he thought the two Tarriors were done for, a figure appeared above the seven meters tall zombie. Wan Yongzhen leaped above Bolios, holding the silver spear in his hand. At the same time, Duan Ya and Zhen Yang came from behind Bolios.

Head was the zombie’s weakness. It was just common knowledge for the Tarrior, and that was why Wan Yongzhen came for the head. The silver spear was covered in mana, and he plunged into the zombie’s head from the top.

Bolios noticed the incoming attack, and he swung the greatsword upward. The sword and the spear clashed, blowing Wan Yongzhen away. It was a good try, but his real purpose was not to kill the giant zombie but to distract it.

As the giant zombie clashed against Wan Yongzhen, Liao Zhenya and Zhen Yang slashed their swords upward, aiming at Bolios’ other hands. Their swords cut through the hand, and the two Tarriors fell off from Bolios’ grips.

Bolios was angry with the interruption and let out a beastly roar. It swung the greatsword toward the two who were about to land on the ground after cutting its hands. They could not dodge the sword for sure, as they did not have the shield to block the incoming attack. On top of that, they did not have a defensive skill as their class was Grand Warrior.

The class provided great destructive power and one movement skill. They could not use their movement skill while their feet were not on the ground. With that, their only choice was to block the greatsword with their swords. However, they would suffer greatly to receive the attack with their disadvantageous position.

”Good work,” At that moment, Gan Shuo managed to reach the giant zombie in time before the sword could reach Zhen Yang and Liao Zhenya. He swung his shield, which was enforced by mana, toward the sword. He shoved the shield toward the sword instead of defending passively. With that movement, he deflected the attack without losing his built-up momentum.

Gan Shuo did not hesitate to leap toward the hand that was holding the greatsword. He used one of the Grand Guard’s skills, [Heavy Strike]. The sword cut through the wrist and fell off along with the greatsword. He then kicked the giant zombie’s body to push him down from the air, “Run!” He shouted toward Liao Zhenya and Zhen Yang.

Both did not hesitate to run, dragging the half-awake Tarrior who had just been rescued from the death door.

”Don’t lower your guard! The other one is still in the sky,” Gan Shuo reminded the others to keep their guard as he looked up at the flying zombie. He did not have the time to grieve from losing seven of his subordinates. Those sevens were his first casualties since he took the post.

To Gan Shuo’s surprise, Arkelios was still watching from above. The flying zombie did not show any intention to help the cornered Bolios.

”You should not let your focus split. You just angered someone you should not have angered,” Arkelios shook his head while smiling. The smug smile invoked Gan Shuo’s urge to punch its face.

After five minutes of bombarding the giant zombie with mana arrows, the archers stopped shooting as they ran out of their mana. They could no longer use the skill as they used everything to kill the giant zombie.

The explosion died down and revealed the figure behind the smoke. Bolios was still standing on his feet, but it had lost half of its body. Everyone could see the bones and the decayed inner organs inside its body. It lost five hands, three of them were cut by Gan Shuo, Liao Zhenya, and Zhen Yang, and the other two hands were lost in the bombarding of mana arrows. On top of that, a quarter of its head also went missing.

The giant zombie still stood straight, and everyone could see Bolios’ right eye moved, meaning it was still alive even after all of that. They had not crossed the worst part; the flesh started to bubble from the missing part. Bolios regenerated all the missing chunks in the following five seconds and returned to its original form.

”GRAWWWLLL!!!” Bolios released an angry roar as black energy started to cover it. A giant egg made of black energy formed, covering the giant zombie.

Gan Shuo thought of attacking the giant zombie right now. This was a golden chance while the giant zombie did not move. However, as the thoughts appeared in his mind, the black egg disappeared and revealed Bolios’ figure.

The seven-meter-tall Bolios was reduced to four meters, and its body was covered in skeletal armor. If before it had a white skeletal armor, the new one was black. The black skeletal armor covered its body from the top to bottom, including all its arms. An additional pair grew up after it came out from the black egg. Bolios now had four pairs of hands.

That was not the end of its evolution. If its height was reduced by almost half, its hand grew longer, a half-meter longer than before. Not just that, the two-meter-long tail also doubled up to four-meter-long.

The first thing he did was look at his subordinates. If his subordinates were discouraged after Bolios used its transformation, the chance of them stalling the fight until the reinforcements arrived would fail. With no will to fight, this zombie would easily slaughter them.

Instead of losing their will to fight, the Tarrior gathered behind him to his surprise. They stood in a formation once more, and he could not believe it, “You guys are not afraid of death, huh?” He muttered to himself, somewhat proud to have them on his team.

”Death will come to us anyway if we do nothing, right? Do you remember Emperor Tang Shaoyang’s words?” A man in his mid-thirties came next to Gan Shuo. He was one of the Squad Captains on his team, “Emperor Tang Shaoyang said better die trying than die doing nothing; we will try to fight this damned monster until our last breath.”

Gan Shuo laughed, “That’s right. It’s not like this damned zombie will take us prisoner or anything. Better die trying than doing nothing,” He nodded his head, straightened his back, and raised his shield to his chest level.

”We are on your back too, Captain,” Wan Yongzhen, Zhen Yang, Liao Zhenya, and Chang Jie came, standing right behind him.

Chang Jie smiled, showing his white teeth, “That’s not enough to make me run. I don’t want to escape like a coward again for the second time. I will face anything this time. I will not run!”

Gan Shuo waved his hand, “Whatever.” He did not stop Chang Jie this time. There must be a reason why the big guy insisted on fighting; the guy might have a backstory he did not know. Whatever it was, it was not his concern anymore since the death was right in front of him.

”Until our last breath!” The Tarriors followed afterward.

”Better trying than die doing nothing? Then I will not give any of you a chance to try,” Within that single second, Bolios appeared right in front of Gan Shuo.

Gan Shuo’s eyes widened in shock. He did not have the time to use the skill or use his mana to enhance his shield as Bolios punched him. The shield broke apart, and the punch landed on his chest.