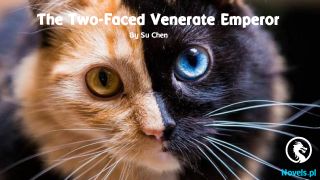 Time ticked down, and the Stanion Family was approaching the Harnian. The city’s atmosphere returned to tense once more upon seeing the frequent appearance of the patrols. People celebrated after the four rebel army leaders’ execution, yet the war came to them once more. Even though the Tang Empire told the citizens nothing about the incoming battle, they could guess it by looking at the fortified wall.

Meanwhile, Zhang Mengyao still discussed the following plan to cope with the Stanion Family. Legion Commander Moonsong returned to the room with the new update from his legion from surveying the forest.

“We have found another cavalry force coming toward our direction, around five thousand,” Legion Commander Moonsong reported the discovery. The Gienas Kingdom personally sent reinforcements for the Athilia Kingdom from another territory.

”But should we fight them?” Kang Xue raised a question, “Can’t we just drive them away from the city?”

”Then let them return a bigger force to us?” Vice Marshal Allan shook his head, “Even if we don’t want to fight an unnecessary battle, we can’t just drive them away after they come for us, Lady Kang Xue.”

”But the Stanion Family knows us as the Athilia Kingdom’s ally because of Queen Melina with us. I don’t think there’s an issue with that. We just need to ask Queen Melina to speak for us, then the Station Family will return on their own, no?” Kang Xue wanted to avoid the meaningless battle.

Fighting against the zombies, she was fine with that. But a huge-scale war against fellow humans was a different thing. She could not get used to this even after months into the Game.

”I don’t think it will work that way, Kang Xue,” Zhang Mengyao shook her head, “Isn’t it suspicious that we drive our ally away instead of fighting together against the rebel army? They will be suspicious about us, and they will directly go to meet the King himself, and that puts us at a higher risk.”

”If we defeat the reinforcement now, we don’t need to worry about the reinforcement during the battle to take over the Athilia Kingdom. We must take this chance to reduce our enemy numbers. Hesitation will bite us back, so we will fight them with no hesitation.”

”While it developed to the situation I don’t like, I have to agree with Supreme General Zhang Mengyao,” Wei Xi supported Zhang Mengyao, “I rather kill the people from the other kingdoms than let my people get killed because of our hesitation. The System may bring advanced stuff for us, but we are regressing to the past.”

”We are returning to the past where war is something common to happen, the ancient time stuff. This is just the start, and the war flame will also spread back to our original world between the factions. Fighting for the territories and resources. We have to get used to this war, or else the others will take advantage of us, Kang Xue.”

Kang Xue let out a sigh and lowered her head. She knew this would happen sooner or later, but she just was not ready for the war, especially if it was between humans. The battle between the Tang Empire and the Suzhou Survivor Establishment was not a real war as there was no real fight there. Lu An took down the establishment with his influence, so this was Kang Xue’s first war.

Zhang Mengyao was about to speak, but someone knocked on the door. She frowned because she warned her subordinates not to disturb them during the meeting unless it was something important.

”This is Elinova. I have something to report,” Hearing the voice, the frown on Zhang Mengyao’s forehead disappeared, “Come in.”

The double door opened, and a purple-haired girl entered the room. Elin walked toward Zhang Mengyao and whispered, “The locals send their representatives to meet you, saying there’s something important to discuss. Do you want to meet them now, or should I arrange it for another time? I think this is a good chance to know more about the locals.”

”Are you close with these representatives?”

”I can’t say that I am close with them because I just met them today, but I think they are reasonable to talk with. I meet them while we are distributing the meal,”

”Alright. I will meet them with you. Please wait a moment,” Zhang Mengyao nodded and observed the other people at the table, “So we agree to defend the city instead of setting an ambush for them, right?”

”That’s a good plan, especially with the Elven Archers. In the upcoming battle, we are at a great advantage, so there’s no need for us to throw away our advantage,” Vice Marshal Allan voiced his agreement.

The others expressed their agreement and supported Marshal Alton’s plan. Even though they clearly had more armies than the fifteen thousand of the Gienas Kingdom’s reinforcement, they were still careful with their plan. Choosing the best plan to minimize the casualties instead of cutting off the time to root the reinforcement. If they came out and set an ambush now, they could wipe the Gienas Kingdom’s reinforcement fairly quicker. But there was a chance they would lose more people than in the siege battle.

Marshal Alton wanted to refuse to take the command, but he knew that it would make him look