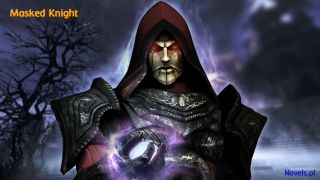 Instead of responding to the boy, Wei Xi came down from the platform. He approached the boy, but the boy did not back away. He was clearly afraid of Wei Xi, his body shook, but he stayed still. The determination to see his parent’s killers executed was stronger than his fear of Wei Xi.

Wei Xi squatted down in front of the boy and hugged him, “I am sorry that we come late and can’t save your parents from these vile bastards.” It was not his duty to save the people of this city. However, those words came out of his mouth in an instant after hearing what the boy experienced during the reign of the rebel army. That just came out naturally.

The boy made a shocked expression, not expecting Wei Xi to hug him. He did not expect the stranger would say sorry and try to comfort him. The boy did not know what to say at this moment as his eyes turned teary. He was like a lost boy and did not know what to do. The tears came down as he could not hold his tears anymore. In the next moment, the boy cried out loud.

”Yeah, you can cry. Don’t hold it back,” Wei Xi rubbed the boy’s hair. He closed his eyes and started to get angry for some reason. He was getting emotional as he did not expect the rebel army would go this far.

The cry rang amidst the silence. It was an unexpected development, but what Wei Xi did was favorable to the Tang Empire’s image to these people.

Wei Xi carried the boy in his embrace and said in a low voice, “I am sorry, but I can’t grant your wish…” After saying that, he tapped the boy’s neck. He knocked the boy unconscious because he knew he could not persuade the boy. He did not want the boy to see the traumatizing execution that might affect the boy’s mental state. While it was not as bad as watching your own parent raped and murdered, it was still traumatizing for the underage kid.

Wei Xi returned to the platform. He took a deep breath and closed his eyes for a moment, “I apologize that we come late, but the Tang Empire vows that you will never experience this tragedy, ever again! I promise you all!” He then bowed his head to express his regret. This was weird for him to feel like this, even though it was not his duty to protect these people.

After coming down from the platform, ten figures came up to the platform. Surprisingly, one of them was Zhang Mengyao. The Supreme Commander volunteered herself to be one of the executors. Alvarina, also one of the executors, Wen the Jade Eagle, and Kairu the Flaming Lion were three out of the ten executors. The other six executors were Marshal Alton, Vice Marshal Allan, Legion Commander Moonsong, Vice Legion Commander Olming, Revalor, and the former elven prince Arbane.

Those people volunteered after Zhang Mengyao volunteered to be one of the executors. It was not that they wanted to be an executor, but because of Zhang Mengyao. Of course, Wen and Kairu chose to be executors for a selfish reason. They wanted the level from killing the rebel army. As for Alvarina, she followed her Master’s order.

After the ten figures stood in the center of the platform, ten soldiers came while dragging ten limbless soldiers from the rebel army. The ten rebel armies still whimpered in pain. While the bleeding stopped, the pain was there.

The civilians’ eyes brightened at the sight of limbless knights of the rebel army. They were the bane of the Harnian City, and these people could never forget what the rebel army had done to their city.

The ten rebel armies were placed in front of the ten executors, and the executors moved to the side of the rebel army. They raised the battle-ax they brought up for the execution. Zhang Mengyao was the first one to raise her ax, followed by the other nine executors.

As soon as Zhang Mengyao swung her ax, the other nine followed. The sound of chopping resounded in the air. The sound was similar to cutting meat on the cutting board. The ten heads rolled as the blood flowed out, spreading on the wooden platform. Instead of retrieving the body, Liang Suyin sent her fire to swallow the ten dead bodies.

”They have no place in this world!” Zhang Mengyao said coldly.

The flame dissipated, leaving no trace of the dead bodies. At the next moment, one person started to clap. Everyone looked at the person; it was a woman. She wore ragged clothes, her face paled, her lips cracked, and her eyes were red. Tears glistened in her eyes, but she was smiling. After the woman, the others followed and started to clap as well. Some people even screamed and cursed at the rebel army.

The quiet atmosphere turned boisterous with the clapping and cursing. Some were hysteric because they had lost their loved ones. Zhang Mengyao proceeded with the execution, but they directly went with a hundred people this time. The platform was big enough for a hundred people, and another ninety executors came up to the platform. While the public execution was needed, they could not spend much time on it as there were a few thousand rebel armies alive after last night’s raid.

Half an hour passed, and they had executed all the rebel armies but four individuals. The ninety executors came down from the platform, leading the civilians to think the execution was over, but four Tarriors dragged four people to the platform. This time, Zhang Mengyao did not execute the four people right away. She hung them on a wooden pole and tied them up.

”These four men are the leader of the rebel army in this city! They are the leaders of the people that brought misery and misfortune to Harnian City! We will not execute them right away and give you all a chance to vent out your frustration, anger, resentment, everything on them!” After saying that, a hundred Tarriors brought a bag with stone in it. They poured out the stone in front of the civilians.

”We will not force you all to do this, but we are giving a chance to those who want to “punish” the rebel army leaders. You have fifteen minutes before we execute them,” After that, Zhang Mengyao came down from the platform, followed by the other nine.

This was not her idea but Marshal Alton’s idea. The Marshal proposed the idea of giving the civilians a chance to vent out their anger and hatred of the leaders of the rebel army. It was just a minor detail, but the civilians would look at the Tang Empire in a better light after this.

At the start, the people hesitated to take the stones. But everything just needed someone to start it before the others followed. A woman who started the clap rushed forward, taking the stone at the size of her palm. She did not immediately throw the stone as she rushed closer to the platform before throwing the stone. She aimed for the head.