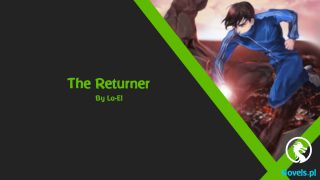 Zhang Mengyao squatted next to the Queen and slapped her cheek. She did not use her full strength as she just wanted to wake the Queen.

Queen Melina jolted awake and immediately sat after she felt the pain in her cheek. However, she did not put her hand on the cheek but on her left arm. The memory of her hand being torn apart was still vivid in her mind, so she subconsciously reached for her left hand. To her surprise, her left hand was intact. She looked down and frowned afterward. Even the pain was still vivid, but her arm was still there, “A dream?” She muttered.

”Nope, it’s real. I tore your hand apart, and I ask my sister to regrow your hand again,” Zhang Mengyao replied to the Queen, “That’s what you get from testing me repeatedly.”

Melina immediately turned to the voice and met with Zhang Mengyao’s expressionless visage. The scene where the woman in front of her tore her hand apart resurfaced in her mind once again. There was no hesitation as if this was not the first time Zhang Mengyao tore apart someone’s hand. The scene invoked the fear deep inside her as she looked away from Zhang Mengyao.

”There’s only one choice for you, Melina. Become my slave, or Larissa has to grow up without her mother,” Zhang Mengyao did not care if the woman in front of her or the others looked at her as a monster.

Melina immediately turned toward Zhang Mengyao once more despite the obvious fear in her eyes. She did not speak for a moment as she processed what Zhang Mengyao had told her. A slave was even lower than a commoner, the people with no rights. There was no way she would immediately say yes to that, especially since she was the Queen of a kingdom. With all the privilege she had, there was no way she would say yes to that.

”Will you return Larissa to my husband if you kill me?” Melina gathered the courage and spoke up. She was still trying to negotiate for her daughter.

”No. I will not return your daughter to your husband. If I kill you, there are only two futures awaiting your daughter. First, we kill her to remove the seed of future problems. Your daughter may come for us if she knows her mother was killed by the Tang Empire, and I don’t want that to happen,” Melina’s face lost its color as she imagined her daughter being killed because of her. She thought her daughter would be spared because these people treated her daughter kindly.

”Second, we will raise your daughter as one of us. She may become an assassin, a soldier, or maybe a whore for the soldiers if she is useless.”

”I will become your slave, but—” Before Melina finished her words, Zhang Mengyao’s hand reached her face, holding her cheeks, and brought her face closer, “It seems you are misunderstanding something, Queen. There’s no but! This is not a negotiation. Live as my slave and watch your daughter grows up or get killed! You make the decision, Queen!”

Melina’s chest heaved up and down. She had never been humiliated like this in her entire life. She was angry but also helpless at the same time. There was nothing she could do about her current predicament, listen or die. Dying was not the scariest thing in her life, but she could not help but imagine what her daughter must have gone through if she chose to die.

’Live! I have to live! As long as I am alive, there’s a chance for me to change the future. Endure this, Melina! Endure this!’ Melina took a deep breath to calm herself from her anger and the other emotions that bubbled inside her. She opened her eyes and looked up to Zhang Mengyao, “I will take your offer to be your slave.” Her face turned red after saying that. From a Queen who was respected by many people to a slave of someone else. She was ashamed this happened to her and never thought this day would come at her.

Selena held another oath ceremony for the Queen this time. After the oath ceremony was over, Zhang Mengyao asked Arina and Selena to bring the Queen away from the tent, “Bring her to her daughter, and you stay here,” She pointed at the kneeling Alvarina. The Queen’s protector was still kneeling, too ashamed to look at the Queen.

After Queen Melina left the tent, Zhang Mengyao returned to her seat and motioned to the others to come, “There will be a slight change with our plan. We will still take this city, but instead of getting to the King’s good side, we will take over the Athilia Kingdom. Let’s do it or die! I would rather die on the battlefield than die because someone is playing tricks on me. That’s a silly way to die, so there will be no ally for us in the dimensional tower. Die or obey us!”

”Any complaints?” Zhang Mengyao scanned the people in the tent, and all of them shook their heads, indicating they would follow her plan, “Good. We will attack the city at midnight. I want The Moon Tribe to take over the wall and open the gate for the main army. Do you think you can do it, Legion Commander Moonsong?”

Moonsong smiled, “The Moon Tribe will not disappoint you, Supreme General Zhang.” This was the chance to prove their worth to Zhang Mengyao, earning her trust for the future of the Moon Tribe in The Tang Empire.

”Mnn,” Zhang Mengyao nodded, “Where’s Virion?” She waved her hand, indicating not to answer her question, “I want the Elven archers to occupy the wall and use them as our support to fight the rebel army. We will use this area as the battleground as the knights and Tarriors will lure the rebel army near the wall. As for us, as usual, we will wait in the dark until the enemy’s commander and Epic Ranks appear.”

”How many Epic Ranks does the rebel army have, Alvarina!?” She asked the defeated protector. Each time she went to the battlefield, she always thought of a plan that would cost them the minimum casualties or even no casualties. Each battle, she would ask the Epic Ranks and above to spread out and hide, getting ready to fight the enemy’s Epic Ranks if they were to appear. That way, they could react in time and did not give the Epic Ranks a chance to kill the Tarriors.

”This should be easy,” Zhang Mengyao muttered in a low voice, “You will sneak into the city and gather the information for us, Lu An. Don’t use your detection skill; those Epic Ranks will notice you if you use the skill on them. Just gather information for us and mark where the important people may live. After securing the eastern wall, we will confine the remaining rebel army in the city to ensure there’s no leak that we have taken over the city.”

”What about me? I mean, what shall I do during the night attack? You have not assigned me or the TEID any task for the night battle,” Lu An raised his hand.

Zhang Mengyao fell silent for a moment before taking the sleeping cat on the table and handing it to Lu An, “Bring Greed with you and secure the western wall for me. Make sure no one gets out of the city and do it silently.”

As the black curtain covered the whole sky, the Tang Empire’s army was ready to launch their night attack. Moonsong was in the front, leading his tribe for the night attack. The Moonlight Rabbit did not use any weapons. Their claws were their weapon, and they wore all black clothes like a ninja. The black outfit was the perfect cover for the night attack.

Zhang Mengyao stood next to him, closing her eyes. She never led a big battle against another faction or kingdom like this. This was the first time, and she was visibly nervous. She had the trauma where her plan failed and led to casualties in the early days when the Tang Empire had to defend the smart base against the zombie horde. Even though she had slowly overcome her trauma, it always came back to haunt her.

”There’s no need to worry, Master’s woman. You have me here for the emergency scenario. If things don’t go as you planned, leave everything to me,” Wrath could sense the nervousness from Zhang Mengyao and comforted her. This woman was his Master’s mate, and it was his duty to protect her in the Master’s absence.

”Yes, please trust us, Supreme General Zhang. We will not disappoint you,” Marshal Alton, who usually did not talk, tried to comfort his superior as well.

”I am fine. This just reminds me of my past trauma,” Zhang Mengyao shook her head. She took a breath and released it in one go, “Go ahead, Moonsong. Start the night attack!”

After receiving the green light from the Supreme Commander, Moonsong motioned his hand forward. That was a signal for his people to follow him. In the next second, Moonsong’s figure disappeared. At the same time, the Moonlight Rabbit around Zhang Mengyao also disappeared.

”You are so proud of your kingdom, aren’t you? We will show what the Tang Empire is capable of,” Zhang Mengyao said to Alvarina.