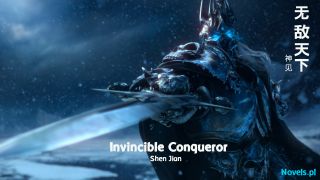 "I will do my best too," Zhang Mengyao muttered in a low voice, "Have the

[They haven't decided which territory they want to live in, Ma'am. However,

the Elven Kingdom has narrowed it down to two territories, between Ningbo

and Hangzhou. I think they will come up with a decision within one or two

her request because Origin had called her Mistress before. She felt like Mistress

had a dierent bad meaning, so she came up with this because the AI did not

want to call her name.

"What about the Moonlight Tribe?" Zhang Mengyao turned around and left the

oce. The migration was quite more complicated than she thought it would be,

especially for the elf. They loved to live in the territory with trees, so they had

already been looking for that place for over a week.

[The Moonlight Tribe have decided to live in the main territory. There's an

island to our northeast, and Legion Commander Moonsong asked our

permission to live there.]

for a moment. It piqued her interest as to why the Moonlight did not want to

manage a territory with a smart base. Without a doubt, the smart base was a

huge help for the people from Lukan, yet the Moonlight Tribe still chose to stay

in the main territory.

"Arrange me a meeting with Legion Commander Moonsong," She decided to

talk it out with Moonsong. "Also, tell the other girls that Your Majesty is taking

The Trial of Ancient right now, so he will be away for a week to a month. What

about the dwarf's progress?"

[The dwarf is indeed amazing, Ma'am. They have built the houses for them to

live in our underground. They ask us for the secrecy, so I haven't told anyone

the secret passage to the underground. I can lead you there if you want,

wants to meet with Your Majesty along with the guests. Do you want me to

guests and wanted to meet Tang Shaoyang. Declining the request was the right

Tang Shaoyang was not here. However, she was curious about the guests.

"No, delay the meeting with Legion Commander Moonsong. I will meet Chief

Park rst," Zhang Mengyao turned around and walked to the exclusive lift.

"Are you sure about this, Nam Hoon!?" Yoo Kwang Sung questioned his guild

leader's decision to bring the eleven people to The Tang Empire's main base.

"I am not going to lie, but this is so stupid, the stupidest decision you have ever

and loudly for the guests invited by Park Nam Hoon. She did not bother to lower

her voice at all.

"Hah…" Park Nam Hoon let out a sigh and helpless smile. "We can't be

ungrateful, right? The Haven has helped us a lot in the past. This is the last

thing I can do for them. Don't worry, I am not going to help them with the talk.

I am just helping them to meet Your Majesty Emperor."

That was right; the eleven guests were the members of Haven. They came to the

a discussion. Yeah, it was eleven, not twelve. With Yeon Hee following Tang

Shaoyang, the Haven should have been left with twelve members, but there

were only eleven members. Dae-Jung was not with them, the missing member.

"Yeah, your silly sympathy will incur His Majesty's wrath by inviting them to

the main base. Even if you want to help them, at least, you must ask Your

Majesty rst if you are allowed to bring them to the main base," Song Shi Eun

was so frustrated with Park Nam Hoon. "You didn't even talk this out with us

either. I should let Cha Hyuk punch your face."

Park Nam Hoon did not discuss this with his friends either, as he one-sidedly

decided to bring the Haven with them when they decided to visit the main base.

Thanks to that, Cha Yuk and Yu Jin Sang were upset. Cha Hyuk almost punched

Park Nam Hoon's face, but Yoo Kwang Sung stopped in time. If not for that,

Despite the obvious snappy remark directed toward them, The Haven members

remained silent. Not because they were guilty of the Legion Guild, but because

this was Tang Shaoyang's home. They were inside the devil's home, so they did

not want to cause any commotion as they came to talk, not ght.

TEID was the newly established division headed by Lu An. TEID stood for Tang

Empire Intelligence Division, and that was the third name for this new division

as Lu An kept changing it. The third name lasted longer than the two previous

names, about three days by now.

Lu An was sitting behind the table, reviewing the report from his subordinates.

After a while, he slammed the papers on the table and massaged the space

between his eyes, "This is so tedious. I would rather become a soldier and ght

in the front line rather than reading all these reports."

"Then you should resign from your position and join the army instead," Yeon

Hee helped tidy up the messed up table. Overnight, Lu An managed to convince

Yeon Hee to be his personal secretary. While her position was personal

secretary, in fact, Lu An was watching her. Yeon Hee accepted her current

situation and took the oer; of course, it did not mean she was loyal to the

Empire. Rather than staying in the connement room, she would go outside

and help with a little work while thinking about her own future.

"Your Majesty has trusted me with this position, and I will not disappoint

him," Lu An shook his head and took the new paper. His eyes gleamed when he

read the recent report. "Interesting, my people spotted your friends in the main

base." He then handed the report to Yeon Hee.