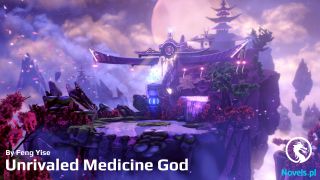 "You guys are so persistent. Why don't you just die peacefully?" Chup Seung-Gi took a deep breath as he got away from Yoo Kwang Sung and Yu Jin Sang. He had to fight the two Vice Leaders if he wanted to get into the Legion Guild's territory. The Warlord Guild encountered fierce resistance even though they won in numbers.

"Heh, even if we lose the battle, at least, I will bring you down with me," Yoo Kwang Sung grinned.

"Why are you so pessimistic, Kwang Sung," Park Jin Sang nudged his friend with his spear's shaft. "We are here to win, not to lose. So, stop wasting your breath on him and kill him. We have to help the others after this."

"Bahahaha…" Chup Seung-Gi let out a loud laugh while shaking his head. "Killing me? You two? We have been fighting for an hour, yet you can't even touch me. Also, you should be worried about your smart base instead of defending your outer wall. The Black Knight and The Giant Guild should have made their way there already."

"You should be concerned for your own well-being, Chup Seung-Gi!" Yoo Kwang Sung and Park Jin Sang immediately looked to the back as soon as they heard the familiar voice. Park Nam Hoon was walking toward them with a big smile, the smile of happiness. "The reinforcement has arrived! Let's drive the enemies out!" Park Nam Hoon rallied his people as he rushed to his friend's side.

Yoo Kwang Sung and Park Jin Sang were surprised with their Guild Leader's arrival. This was not something they expected because Park Nam Hoon brought a quarter of their force to fight a whole guild, the Shade Guild, around twenty minutes ago. The plan was to drive the Warlord Guild out before they helped Park Nam Hoon, but it was Park Nam Hoon who came to help them instead.

"Calm down. We win; the reinforcement has arrived." Park Nam Hoon was being suspenseful to his friend while smiling mysteriously.

"Damn! How can Park Nam Hoon be here? What is the Shade Guild doing? They are so useless!" Chup Seung-Gi cursed under his breath as he stared at the perfectly fine Park Nam Hoon. At this moment, he heard the screams of people from his right side. He looked toward the scream, but he saw nothing. Then a scream resounded from his left side; he subconsciously looked to the left. He saw ten of his people fall down with an arrow on their foreheads.

Before he could proceed with what happened, he heard more screams from behind. He turned around and saw his backline force fall down one by one. The archer and the mage ran around as a shadow moved between them, cutting his subordinates' heads one by one. He could not figure out what the shadow was, then he sensed something dangerous from his front.

Chup Seung-Gi raised his spear and directed it forward. He found a black-furred cat right in front of him, three meters away from him. "Meow," The cat meowed at him. He did not know the cat breed, but it was the biggest cat he had ever seen in his life, almost a meter long. "Huh!? Why is there a cat here?" He just muttered those words when the cat suddenly became a pitch-black shadow and expanded in size. The shadow was like a giant mouth that wanted to swallow him.

Chup Seung-Gi's eyes widened in shock, and he was about to leap backward. However, the monster in front of him was just too fast as the shadow swallowed his upper body. The shadow disappeared after swallowing half of his body, and Chup Seung-Gi's upper body also disappeared along with the shadow. It happened in two seconds. The lower body walked backward, step by step, as blood spurted out from it. After walking seven steps backward, the lower body fell off.

Yoo Kwang Sung and Park Jin Sang were shocked to witness the death of Chup Seung-Gi. They had fought the man for almost an hour, and they only managed to exhaust Chup Seung-Gi's stamina. However, a stray cat came out of nowhere, killing Chup Seung-Gi in a flash. It took a while for them to accept the reality.

"Where's the cat? There's a monster here, be careful!" Park Jin Sang meant to remind his people, but then a hand tapped his shoulder. "Chill. It's not just a monster, but our reinforcement." Park Nam Hoon calmed down his friends. "It's Your Majesty's familiar, Greed."

Everything made sense for them now; why Park Nam Hoon could regroup with them in twenty minutes after leaving them, was because of the reinforcement from the Tang Empire. The screams continued to resound in the air, and all the screams came from the Warlord Guild's people. Yoo Kwang Sung and Park Jin Sang looked at the battlefield… There were two shadows hunting the Warlord Guild's people, and there were also arrows killing their enemies.