Support
Random Novel
So What If It’s an RPG World? 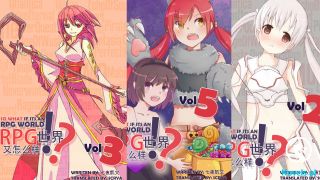 If the first and the second fight were a surprise for the spectators, the third round was a strange round. They saw the girl was walking slowly toward Jason, and the latter just stood there doing nothing until the girl stabbed the man in the back. The lance pierced through Jason's chest and died. They did not know what actually happened, why did Jason let Zhang Mengyao approach him without doing anything.

Tang Shaoyang found the stage was covered in Zhang Mengyao's aura, but he did not know what she did to Jason. The aura merely covered the stage did not reach the spectators. He had no clue why Jason stood still, and Zhang Mengyao was the only one who knew for sure since both his Demon Eye and Dragon Eye failed to see what she did on the stage.

At least, that was how it looked in front of the others, they had not realized that the Tang Empire was planning to kill all five fighters from Saint Guild. Zhang Mengyao returned to the booth, and everyone in the booth looked toward her earnestly. They wanted to know what she did to Jason.

"It's actually an Illusion Domain. I create a domain that will create an illusion. He did not move because he saw my illusion not moving." A simple explanation explained everything, and Zhang Mengyao added it at the end. "However, the skill is not that strong. If he used his Bloodline Transformation, the illusion domain might not work, and this is actually my first time trying the skill."

Of course, no one would think that was an easy feat after the first three rounds. The Tang Empire had showcased their capability of how strong their fighters were. It was understandable if Saint Guild decided to forfeit their place right now.

Maybe Saint Guild felt the pressure, or maybe they still did not want to give up. The second Vice Guild Leader was sent to fight Liang Suyin. Edwin was the second Vice Guild Leader of Saint Guild, and he volunteered himself to fight Liang Suyin. Did he hope to win the match against the Tang Empire? No, he wanted to fight to avenge his people. He wanted, at least, to kill one member of the Tang Empire, and Liang Suyin was the right target.

The woman was a mage, and he was an assassin. As long as he moved fast enough, her skills would not be able to hit him. He was the right match-up, at least, he thought so. However, those thoughts changed when the fight started.

Edwin could do nothing but witness it with his own eyes that everything turned into fire, including the stage. He lost his footing, but he tried to fight back by using the Bloodline Transformation. However, that was not enough to fight off the fire. The fire burned him into the dust, leaving only his two short swords behind.

The giant screen above the stage showed the girl in flames, Liang Suyin. Her hair, body, and everything turned into fire. After burning Edwin, Liang Suyin pulled out the fire, leaving the whole stage charred black. She was also no longer on fire. If not for the charred stage, the spectators might think the fight had not started yet. Yet, the fight ended in a flash. The spectators only saw Liang Suyin turn into fire and spread the fire to the whole stage until it burned Edwin. Edwin tried to fight back, but the fire was just fiercer than his bloodline.

And then, it was the same as the previous three fights as Liang Suyin immediately surrendered after winning her battle. She returned to her booth as the System repaired the stage. The charred black stage returned to its original state.

Another silence followed up as the spectators focused on the Tang Empire's booth. At this point, people believed that Saint Guild had no chance to pass into the semi-final. All the fighters from the Tang Empire were not just strong, but extremely abnormal strong, each one of them.

As the silence continued, the System also proceeded with the last round between the Tang Empire and Saint Guild.