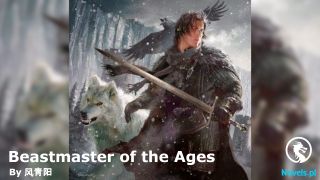 Please vote for the change:

2. Don't change the rule for the Earth Tournament.

Note: The System will keep the rules until the next Earth Tournament. Not using your right to vote means agreeing to change the rule.

The sixteen factions had five minutes to make their decision. Tang Shaoyang had the idea, but he did immediately use his vote as he glanced at his Supreme Commander. Before he could say anything, Zhang Mengyao motioned toward the outside of the barrier with her chin. "Someone is coming to talk."

Tang Shaoyang glanced toward the left and saw the First Order Guild's leader come to his booth. He turned off the barrier as Zhang Mengyao, and Wei Xi brought Herman Bonivido into the booth.

"Hello, Sir Tang Shaoyang. My name is Herman Bonivido, the First Order Guild's leader." Herman put up a smile as he introduced himself formally.

Since Herman called him Sir Tang Shaoyang, he did not introduce himself to Herman. "Hello, Sir Herman. I would prefer for you to be direct, so do you need something with The Tang Empire?"

"We haven't made the decision yet, but I will tell you my thoughts. I disagree with you, Sir Herman. They want to weaken and intimidate the smaller factions, so do I. I want to use this chance to weaken the World Government. I am going to kill all fighters from the World Government's factions. So yeah, I agree with the rule change." Tang Shaoyang voiced his thoughts about the vote.

"We must protect the smaller factions? Why must we protect the smaller factions?" Tang Shaoyang suddenly got confused with Herman's claim. He never stated that the Major Faction had to help the small factions, nor he said that the Tang Empire would help the small factions. "If you are talking about the Tachibana Clan and the New Nation, then you are wrong about me. It's just purely business."

"If you want to persuade me to vote with you, then I have to say sorry. I will not change my mind unless my people can convince me to vote for the second." After Tang Shaoyang said that, Herman glanced toward Zhang Mengyao with an expectant look.

The Emperor was a lunatic, so he hoped the Vice Leaders were logical. From the First Order Guild's perspective, it was not wise to fight the World Government now. Not when they could fight the six Major Factions. On top of that, it would be hard to find out how strong the six Major Factions were with them being separated like this. There was no path that connected one faction to another, so it's unwise to fight the World Government openly.

"I am sorry, but I agree with Your Majesty." Wei Xi was the first one to speak. "Using their plan against them, that's brilliant."

Herman looked toward Wei Xi with his slightly rounded up. He opened the Vice Leader to be a little bit logical, not the same lunatic. However, he was wrong about that. Only a lunatic would follow another lunatic. The only hope was Zhang Mengyao as he looked toward the woman.

"There's no need for me to persuade The Emperor, especially, when there's nothing wrong with His Majesty's plan." Zhang Mengyao shook her head. "We will choose to disable the killing rule. A piece of advice from me, I recommend you to surrender when you meet us in the Playoff Stage."

Herman was in a daze after all of that. He tried to persuade them to take his side, but it seemed he had made the wrong choice. He stayed for a moment before nodding his head. "It's a shame we can't reach an agreement, but I wish no animosity between us. Very well, a deathmatch it is. I will take my leave now, Sir Tang Shaoyang."

"Mnnn, but you should listen to my Supreme Commander, Sir Herman. Regardless of whether the First Order Guild is part of the World Government or not, I will not show mercy in the fight." Those were the last words from Tang Shaoyang before Herman Bonivido left the Tang Empire's booth.

Whether Herman could persuade Tang Shaoyang or not, the vote had been decided the moment the System agreed to open the vote. Including the six Major Factions, there were three small factions of the World Government that passed to the Playoff Stage. That meant the World Government had nine votes out of sixteen votes.

Herman Bonivido shook his head as he turned on the barrier so the people outside could not hear their conversation. He told his Vice Guild Leader and his members the result of their discussion, leaving them speechless. Especially when the Tang Empire threatened them, that was just absurd.

"You are right, Boss. They are lunatics, and I think we shall not get too close with them. They will attract disaster sooner or later, so let's not get involved with them." Frans kept shaking his head.

"Guerrilla tactic, we tire him in the first four rounds, then we will finish him off in the fifth match. It does not matter if we don't win the tournament as long as we can kill that Tang Shaoyang. We should show others the consequences of opposing the World Government." Hines Myers waved his hand at ease. "We know that he will come up to the stage as the first participant, so we can use that information to our advantage."

"Amazon Guild, Saint Guild, North Federation, Blue Vest, and Shiva Federation agreed with my plan, so we will be going all out from the start." Hines Myers grinned as he looked toward the Tang Empire's booth. He was excited and could not wait for the Playoff Stage to start.

The screen above the stage lit up and showed the result of the voting.

[We have finished the voting, and this is the result of the voting.]

Herman and Frans realized that their effort to persuade the Tang Empire was futile with that kind of result. The World Government had successfully initiated the deathmatch.

[We are sorry for the slight delay, but we will start the Playoff Stage now. The first match is…]

[Blue Vest Vs. The Enforcer]