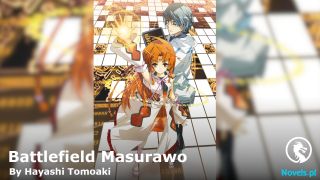 The knights were raising their swords once more as the Commander Knight shouted. "Charge to the enemy and save Guardian Riona!"

"NOOOO! DON'T! DON'T YOU DARE TO MOVE!" Ryu immediately screamed on top of his lung and directed his aura toward the knights. His aura stopped the knights instantly before they could charge toward Tang Shaoyang. The old man then glanced at Riona and relieved his old friend gave up fighting back. The wind dissipated from Riona's body as she stopped the transformation.

It was not that he did not save Riona, but he did not want the knights to throw their lives away. It was like kittens flocked to a tiger, but no matter how many the kittens were, they could not do anything to the tiger, let alone save Riona. It was more like suicide if the knights charged toward Tang Shaoyang and the Angel.

"Haha, in the end, you are still afraid of death, and yet you still want to fight My Master?" Zara placed her index and middle fingers on Riona's neck. The black energy transferred into Riona, and her skin instantly turned darker. After that, the black sword disappeared as she released Riona's head. "She is harmless now as she can't use her mana, and her body can't move freely like before."

Zara infused her black energy into Riona's Mana Whirlpool and muscle within a tolerant amount. The black energy would not kill Riona, but it would disrupt her mana and movement as the black energy was not compatible with humans.

Tang Shaoyang ignored the defeated Guardian and glanced toward Alex Stones. "So, what's your answer? I haven't heard your answer yet, Alex!" The stunned Alex snapped out of his daze and frantically looked back and forth between Ryu and Tang Shaoyang. He requested help from The Guardian, but Ryu did not dare to speak anymore as he was afraid Tang Shaoyang would do something to Riona.

"We surrender to the Tang Empire, My Lord." Alex Stones stuck with their agreement that the Malecia Kingdom had agreed since the start. The war was looming over the kingdom, and danger threatened Salamanca Capital.

Ryu shook his head at Alex Stones, who could not speak properly with Tang Shaoyang. When Alex was in the meeting with the nobles and the Queen, he was eloquent and convincing. He did not want to speak, but it would be best to quell Lord Tang Shaoyang's anger at the moment. "I apologize for interrupting, Lord Tang Shaoyang. The Palace is holding an assembly, so the knights are deployed for security."

Ryu saved the knights from being labeled as a traitor by saying that. They were not the main force of the opposition nobles but a guard. Alex Stones' eyes brightened, and he tidied up his clothes immediately. "What are you doing!? Make a path for The Emperor to the Palace!"

Ryu and Alex Stones led Tang Shaoyang into the Palace as the knights made a path. The knights were not that stupid not to realize the grave situation they were in. They sheathed in their swords and bowed their heads as Tang Shaoyang walked toward the Palace. There were six guards in golden armor at the entrance to the Palace, but they opened the double door at the sight of Alex Stones and Ryu. However, they were more shocked to see the dragon, the beastmen, and the angel.

"I don't think you can follow us into the Palace unless you can suppress your size like Wrath, Aerelion?" Tang Shaoyang stopped and glanced at Aerelion. The Infernal Wyvern's head almost hit the roof. Even though the Palace was bigger than Aerelion itself, there might be no space inside.

"Don't worry, My Lord. I can make more space for Sir Aerelion." Ryu finally got to know the name of the black dragon. He felt like the Dragon was important for the talk with the opposition nobles to deter them. They had to know that their enemy was someone who could tame a dragon. It would be better if the Guardian Beast of the Gigante Forest and the Golden Dragon were here. However, he did not dare to make that request as he might offend the Emperor's authority. He should never compare the Emperor's presence, who was higher than the Dragon itself.

"It's actually fine because my dragons are reluctant to attend the meeting, but since you have made the way, then you can join us, Aerelion." The Infernal Wyvern bowed his head as they entered the Palace, the assembly dome where the Queen and the Nobles often held an assembly. There was an uproar, but it was silenced by Aerelion's appearance.

The Assembly Dome had a stance on both sides as dozens of giant pillars stood to hold the weight of the dome. The nobles were stunned when they saw a female figure was being dragged on the floor by the beastmen. There was no way they did not recognize the figure, the Guardian, who had been protecting the kingdom for years.

There was a white throne at the end of the dome where Queen Jasmine sat. Ava sat next to the Queen with ten male elves behind her. The fact Ava sat side by side with Queen Jasmine made clear that Jasmine had lowered her stance. She was no longer the Queen with the highest authority anymore.

Ava smiled when she saw the figure and stood up from the chair. She whispered to Jasmine, "He is the Emperor of the Tang Empire, Lord Tang Shaoyang."

Queen Jasmine stood up from the throne and rushed toward Tang Shaoyang. She knelt in front of Tang Shaoyang, reaching his hand and kissing his hand… "This Jasmine greets Your Majesty Emperor."