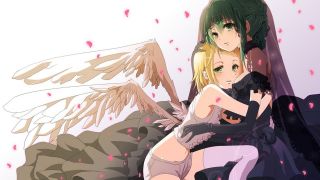 "Should I interfere now and tell the Houston Legacy to give the antidote to the Tachibana Clan?" Victor considered interfering right now. He did not know what the Tang Empire told Izuhara Tachibana, but he felt it was not something he did not like.

Raymond Irving shook his head. "I don't think that's a good idea, My King. We will just make a fool of ourselves if we step out after the Tang Empire interferes. Furthermore, the Tachibana Clan knows our alliance with the Houston Legacy. I think they will be suspicious of us too, and our plan to bring the Tachibana Clan into our alliance is pretty small. The plan will only work if the others don't have the antidote for that poison, My King."

Raymond Irving wore glasses with a neat hairstyle, making him look like a private secretary. This man was a strategist of the Revolution Kingdom, the King's right hand. Of course, aside from being a strategist, this man was also one of seventeen Epic Ranks in the Revolution Kingdom. Most of the time, King Victor would consult anything with Raymond.

"Hah, it's a pity." Victor Brent let out a sigh while shaking his head. "Their fighters seemed decent, and they look like an influential faction in Japan. That means we change our targets." There were five factions from Japan, and two of them had joined the World Union's Central Government. The Revolution Kingdom wanted to expand its influence to Japan, meaning they had to rope the remaining three factions. The Tachibana Clan was on their radar because of their performance in the fight.

"The remaining two are Yamaguchi-Gumi and Mount Fuji?" Victor furrowed his brows when he brought up these two names. Yamaguchi-Gumi was a faction formed by the yakuza, and Victor did not like to cooperate with these lawless people. As for Mount Fuji, they were a faction formed by the surviving soldiers of Japan, and their loyalty was for their country. It would be hard to convince them to be loyal to the Revolution Kingdom.

"Our best choice is the yakuza. While they are wild, we only need them to spread our influence in Japan. Once we can form a teleportation gate between islands or continents, or even find convenient transportation to their location, we can change them with our loyal people." Raymond Irving voiced his thoughts for plan b.

"What about China? That place should have a lot of natural resources for one of the biggest countries in the world." Victor Brent looked toward the Tang Empire's direction. There was a massive wall if they wanted to spread their influence in China with the Tang Empire's existence. Not just the natural resources, but also the human resources since China was the country with the highest population, followed by India. So China was a strategic place to spread their influence.

"Hmmm. Most of China's factions originated from their military that formed a survivor establishment. They are quite united except for the Tang Empire that stands alone. The bad news is they have joined the Central Government, and the Tang Empire will not join us, so it would be hard to put our people from inside China itself." Victor Brent rubbed his chin. "We have to infiltrate China from outside. Vietnam, Myanmar, Mongolia, Laos, or Korea. We can use the factions from that region to infiltrate China. That's our best option, I think."

Tang Shaoyang was not aware of what the Revolution Kingdom planned, but he focused on curing Nomiya Tachibana. "What kind of materials do you need to concoct the antidote?"

"Huh!? Do you want to cure him now, Master?" Yu did not understand why his Master asked this when the Tachibana Clan had not given their answer yet. "Or do you have confidence that they will accept your proposal, Master?"

"It does not matter if they don't agree to become our vassal. If we cure them regardless of their decision, they will look at us in a positive light. So, if anything happens to them, they will come to us for help. If that happens, it's just a matter of time for the Tachibana Clan to become the Empire's vassal." Tang Shaoyang smiled as he opened a portal back to the base.

"You go back to the base and buy the materials from the General Stores. I think level 3 General Store sells the herbs, and you may find the materials there. Ah, if you don't know how the Smart Base works, you just need to call Origin. He will guide you to get the materials." Tang Shaoyang instructed the Ancient Alchemist to bring the poisoned Nomiya inside the barrier.

"Heh, it's just less than two months since you returned from Lukan, but you have become even more shrewd and know how to play softly." Cao Jingyi was surprised by Tang Shaoyang's decision to cure Nomiya Tachibana regardless of the Tachibana Clan's decision. The Tang Shaoyang she knew would use force to make the others submit to him, but he was different this time.

Yu the Ancient Alchemist nodded and entered the return portal to the base. Tang Shaoyang said nothing to the remark as he brought the unconscious Nomiya Tachibana into the Tang Empire's booth. While the ruckus died down, the System continued the tournament to group B.

Group B had six factions, with Blue Vest as a major faction. From the draw, there would be a major faction in each group. So, the major faction would not fight in the group stage but the playoff stage. Tang Shaoyang glanced at the Blue Vest's booth, and these people were wearing blue police uniforms. At least, their clothes and vest were similar to the police uniform. He was unaware of their history, so he did not comment anything about his neighbor.

"Black Devil Madagascar, is that the country famous for their animal? Tasmanian Devil?" Tang Shaoyang rubbed his chin, and most of the factions were named based on the city or a country. "Panama? And Rome City?" He felt Panama was a country name, but he was not sure. He guessed the Sacred Rome was from Italy.

The first match was Blue Vest against Sacred Rome. Tang Shaoyang waited for an exciting battle or even a possible blood bath between the two factions. However, the Sacred Rome forfeited from the fight as soon as their name came out on the screen. Everyone was puzzled by the situation, everyone immediately found out why the Sacred Rome gave up the fight.

When it came to the other two factions, the Central Government's factions went wild. They were going all out from the start, consuming the Norilsk Syndicate and the Grizzly Wolves' energy. Especially the Blue Vest, they were unrestrained in the ring, and finally, a person lost his life in the arena as the member of the Blue Vest accidentally killed the member of the Norilsk Syndicate.

It was not a direct kill as the Norilsk Syndicate's member died in the Norilsk Syndicate's booth. Watching all of this from the sideline, he realized that the System came up with a flawed tournament. Obviously, the accidental killing could be staged easily, like when he used too much strength when he hit the New Nation's member. If he wanted to kill someone, he just needed a powerful skill to kill his target.

His target might not die immediately from the strike, but the target would die after the referee announced the winner. It was counted as an accidental killing, so the killer would not be punished. On top of that, the Central Government's factions easily manipulated the tournament without strict regulation.

Of course, not just one life, but three lives lost in group B. It was the match between the Blue Vest and The Grizzly Wolves. Two fighters from their side die in the first two rounds. In the first round, the Blue Vest sent their Epic Rank right away. That Epic Rank used the bloodline transformation and used an overpowered skill. The Grizzly Wolves' member died right after the referee announced the Epic Rank as the winner.