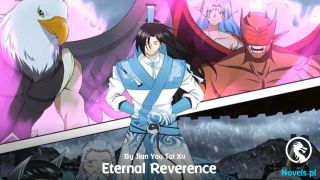 The voice rumbled like a thunderclap through the endless black holes.

However, it received no reply!

A moment of silence ensued, another then a hand emerged from within once more. It traveled through space toward Void Spirit Continent.

However, the hand was struck by a ray of dark light before it could arrive at Void Spirit Continent.

In a spatial rift, the hand exploded apart, and that entire expanse of space exploded with it!

At the door of light in the endless black holes.

It was deathly silent there!

A moment of silence ensued before a voice came from within, “Interesting!”

As soon as it finished resounding, the surroundings fell silent once more.

In the sky above Void Spirit Continent, the undying cavalry turned around and left.

Once they retreated, peace returned to the continent.

But Yang Ye wasn’t at peace at all.

Yang Ye’s entire body was blood red while endless slaughter intent surged out from him, dying the entire sky red.

Everyone gazed at Yang Ye. His eyes were closed tight, and the blood red sword in his grasp was trembling madly.

Yang Ye was on the verge of losing control of the slaughter intent.

His slaughter intent was at the peak of the Progenitor Realm, but he was barely able to control it. Now that Scarlet had enhanced it further, it was unprecedentedly powerful, and it had risen past his limits. So, he was undoubtedly in a very dangerous state.

Elder Yuan and the others had realized this too, so slight solemness appeared on their faces, and so did slight vigilance.

If Yang Ye suddenly attacked, it would be a calamity for them all. Because a casual swing of his sword could kill a Sage now!

Suddenly, Snowy floated over to Yang Ye. Elder Yuan intended to stop her, but An Nanjing stopped him. She gazed at Snowy and Yang Ye, and she said, “He won’t harm her!”

It descended until it reached just half an inch away from Snowy!

But Snowy showed no fear and just gazed at Yang Ye.

A short while passed before Yang Ye suddenly placed his left palm on her head and rubbed it gently, “Aren’t you afraid?”

Yang Ye cracked a smile, but his smile was quite terrifying right now.

Yang Ye placed his left hand on his forehead and spoke softly, “You can come out now!”

A ball of red light flashed out of his forehead.

Once she left him, the slaughter intent around Yang Ye instantly decreased tremendously.

Meanwhile, Snowy flew over to his shoulder, wrapped her paws around his neck, and kept rubbing her face against his.

Yang Ye grinned and gazed at Scarlet, “Thank you!”

If it hadn’t been for Scarlet’s help, it would have been quite difficult for him to deal with the hand from before.

Snowy puckered her lips and waved her paw, countless strands of spirit energy surged toward Scarlet, and the latter was overjoyed by this and absorbed all of it.

Yang Ye sent both of them into the Primordial Pagoda before he gazed at Elder Yuan and the others, “Let’s return to Void Spirit Hall!”

It didn’t take long for them to arrive within the hall.

Yang Ye spoke solemnly, “That should have been the expert who stands behind the undying race. However, that person gave up abruptly for some reason!”

“I feel like someone was helping us!” Meanwhile, Elder Yuan said, “I sensed another force, and it’s very likely that it stopped the expert from the undying race.”

Yang Ye frowned slightly, “Who do you think it is?”

Elder Yuan shook his head slightly, “I don’t know. According to my knowledge, only one person possesses such strength, but he probably wouldn’t help. Besides him…”

Yang Ye gazed at Elder Yuan, “Who are you talking about?”

Elder Yuan gazed at Yang Ye, “A sword cultivator who doesn’t use the sword. According to my knowledge, he’s from the same place as you!”

Yang Ye knew who Elder Yuan was speaking about, and it was the mysterious Unfettered One.

The Unfettered One had helped them?

If it wasn’t the Unfettered One, then who?

But besides the Unfettered One, who else had such strength?

Yang Ye fell silent for a long time and shook his head. He stopped thinking about it and gazed at Elder Yuan, “Elder Yuan, how did your Heaven End Go Board become so strong?”

Elder Yuan smiled, “It’s a product of the Initial Civilization, and its strength surpassed even expectations.”

Since the start of the large universe, there had been four civilizations. The Initial Civilization, the undying race, the void spirit race, and the current one. Actually, strictly speaking, there were only three because the undying race were outsiders who’d invaded this universe.

The Initial Civilization was the most mysterious amongst them. Yang Ye didn’t know how strong they’d been, but he was sure that they were strong.

“The undying race is too strong!” Meanwhile, Elder Yuan said, “We have no chance to win with our current strength. According to my inference, they’re definitely planning something. Otherwise, they would have sent their entire army by now. Moreover, they actually allowed people to surrender to them. Just that alone shows that they are planning something. Of course, no matter what they’re planning, the gap in our strength is undeniable!”

The gap in their strength!

Even Yang Ye had to admit that the undying race was too strong, and they had no chance against it!

However, would he do as the Weapon Progenitor’s group had done, and abandon the others and surrender to the undying race?”

“Surrender?” Yang Ye stood up and said, “Everyone, are you willing to surrender?”

They hadn’t even replied when he added, “In any case, I won’t. I would rather die fighting than live on my knees.”

Elder Yuan smiled, “No one is willing to do that. However, we should be thinking about how to stay alive on our feet!”

Yang Ye replied, “Do you have any ideas?”

Elder Yuan shook his head, “I don’t have any special ideas. But I do have a worst case scenario in mind, and that’s to fight them to the death and take them down with us. The Heaven End Go Board is a precious treasure that can be detonated when necessary. If we detonate it, it wouldn’t be a problem to take around 100 undying cavalries with it. Of course, your Primordial Pagoda can do the same, and it’ll definitely be able to take numerous undying cavalries with it!”

Suddenly, a ray of golden light flashed out from Yang Ye, and it slammed against Elder Yuan.

An explosion resounded, and Elder Yuan was blasted out of the hall.

It was none other than the Primordial Pagoda which had done that!

After it blasted him away, the Primordial Pagoda wanted to attack again, but it was stopped by Yang Ye. At this moment, it was extremely furious! After all, Elder Yuan had suggested detonating it!

The Primordial Pagoda trembled, it was still angry!

Yang Ye shook his head and felt quite speechless. Doesn’t Elder Yuan know that it has exceptional intelligence? Aren’t you looking for trouble by talking about detonating it while it’s present?

Elder Yuan walked over, glanced at the Primordial Pagoda, and laughed bitterly, “I misspoke, forgive me!”

Suddenly, clamorous noise came from outside the city.

They looked out, and then Yang Lianshuang walked in. She said, “Many left the city earlier. Now, they’ve returned upon seeing that the city survived!”

“Let’s go have a look!” Yang Ye led them outside once he finished speaking.

At this moment, countless people were causing clamorous noise outside the city.

However, they fell silent upon catching sight of Yang Ye’s great.

Yang Ye glanced at the surroundings, and his face was extremely gloomy. There were over 100,000 people outside the city! And they were of the human race and sky race.

Yang Lianshuang asked softly, “What do we do with them?”

“We want to enter the city!” Meanwhile someone howled from below.

Countless others started to shout once they heard the first voice.

Yang Ye waved his right hand, and a middle aged man was instantly grabbed from within the crowd. He was clearly afraid when he saw Yang Ye and didn’t dare look Yang Ye in the eyes at all.

Yang Ye walked over to the middle aged man and asked, “You want to enter the city? Why should I let you?”

Yang Ye glanced at the others, “Didn’t all of you want to leave just now? I let you leave. Now, you want to return? What do you think this place is?”

“It was dangerous earlier, so we couldn’t just stay and wait for death to arrive, right?” The middle aged man in front of Yang Ye spoke softly.

“It was dangerous?” Yang Ye gazed at the middle aged man, “Then what about us? Why did we fight the undying race just now?”

Yang Ye gazed at the others down below and continued. At the same time, his voice suddenly became ferocious, “Do you know that if we don’t fight, we won’t die, but all of you will! What? You think the protection we’ve given you is something we should do? If that’s the case, then let me tell you that you’re wrong! From this moment onward, everyone outside the city, no matter if you’re from the human race or sky race, I’ll kill all of you if you’re still here in 15 minutes from now! Since you wanted to leave, then don’t ever come back!”

“You…” The middle aged man in front of Yang Ye pointed at Yang Ye, “You’re too cruel! The army of the undying race is out there. Driving us away is killing us. Yang Ye! Y-You can’t do this, you can’t be so selfish! You…”

Yang Ye fell silent for a moment, and then he gazed at Yang Lianshuang, “Lianshuang, tell me something. Would anyone have buried us if we died in battle just now?”